Welcome to Week 17 of a very special challenge / contest , reading one single issue a week (as they are digitally published that is) of THE SECRET SOCIETY OF SUPER-VILLAINS (1976) .

This time around: THE SECRET SOCIETY OF SUPER-VILLAINS #17, in black and white, with Bob Rozaskis (the Answer Man) back as writer, Dick Ayers / Mike Vosburg, Artists (I think?), followed by the script to #18 that was never illustrated by DC. 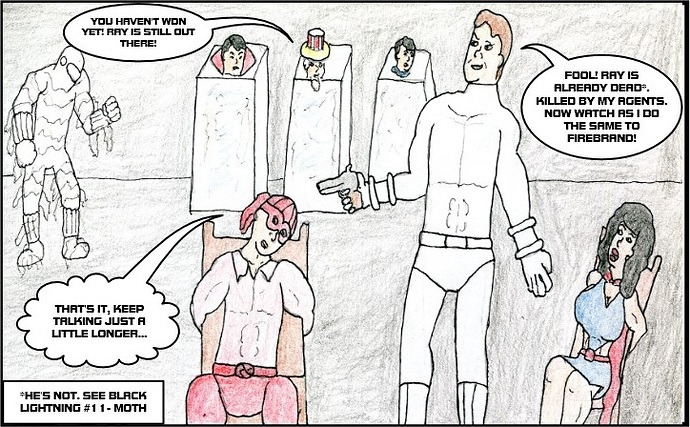 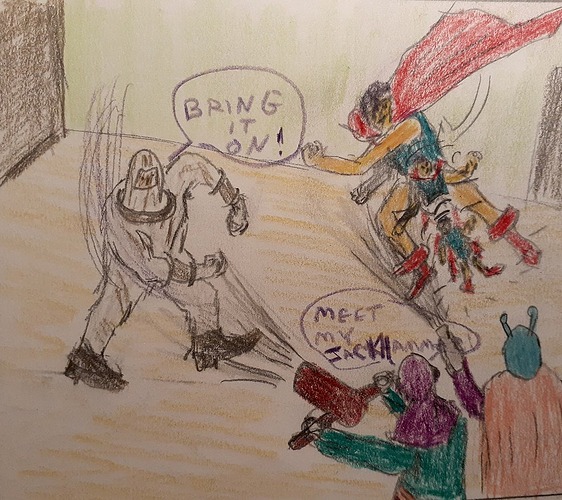 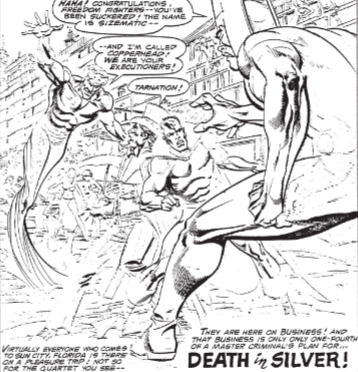 Click the blur below to go to Volume 2 of The Secret Society of Super-Villains, then go to page 259 for this issue- if you have Ultra.

Then, if you have time, please check out the script below for issue #18 here (this part is free, you don’t need to have Ultra to read this): 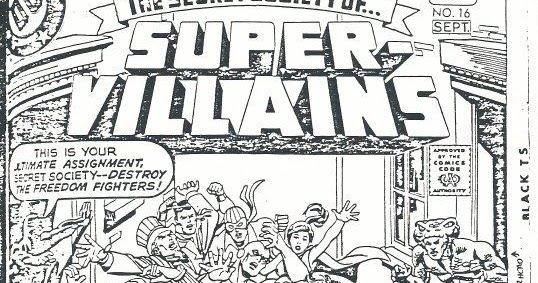 MIA: The Secret Society of Super-Villains vs the Freedom Fighters

Of all the comics I wrote, what quite often comes up is a trio of issues that were never published. Those would be #s 16 through 18 of...

I read THE SECRET SOCIETY OF SUPER-VILLAINS #17

This issue was never published beyond 35 Xeroxed copies, so no letter page or ads to share this time.

And be sure keep an eye out for our once a month first Thursday evening of the month Listen A Long of the classic 1940’s Superman Radio Show adventures (in the Watchalong aisle). The next one is planned for Thursday January 4th at 9 pm ET! [Superman Fan Club] 📻 Superman Radio Listen-Along 📻 Thursday 1/5: Looking for Kryptonite + The Invisible Man 9 pm ET

Next week we’ll read the special issue that we skipped before because we didn’t have the omnibus in Ultra.

Not really. I love the Quality Comics characters, so I didn’t exactly enjoy seeing them get jobbed out to a bunch of c-list Earth-One villains. I mean, these heroes were the resistance force against a world controlled by Nazis! Have some respect! However, as I pointed out last week, there weren’t many super-villains on Earth-X, so I kind of get it.

How many Mirror Master puns can you count?

Oh, god… I counted at least three when the Mirror Master/Chronos vs. Black Condor/Phantom Lady battle started. There were also some choice time and watch puns for Chronos in there. If there are more, I don’t want to know…

What did you think of the Silver Ghost big reveal with Firebrand at the final drawn panel (and then later in the script for issue #18)?

This is a classic example of me getting myself excited over nothing. The last panel of issue #17 got me pumped. The Silver Ghost knows who Firebrand is! This is personal! My Public Domain comic nerd-brain went into full gear thinking who it could be. Is the Silver Ghost really Rod Reilly’s friend and man-servant, Slugger? Is he Rod’s father, “Emerald” Ed Reilly??? Then I read the script for issue #18, and… no, no… Silver Ghost is just some Nazi from Earth-X. He has no actual connection to the Golden Age comics or any other previously published story. What a letdown…

Does anyone know the backstory we never got about the French speaking Star Sapphire?

So, here’s what her DC Wiki article says:

" Remoni-Notra, of the planet Pandina, was chosen by the Zamarons to be their queen, an honor previously bequeathed upon Earth’s Carol Ferris, but refused. Remoni-Notra was given one of the five Star Sapphire gems and was told of the existence of the other four. Using her powers, she came to Earth to locate and steal Carol Ferris’ gem and joined the Secret Society of Super Villains as the new Star Sapphire in hopes of finding a clue to the gem."

Unfortunately, there’s no footnote regarding when any of that was revealed. If anyone knows, please chime in! It would be cool to read the issues with her backstory.

I was letdown that the Silver Ghost had no connection to the Golden Age comics. However, Golden Age continuity does work its way into issue #17. Phantom Lady mentions a time when Black Condor was a senator alongside her father. This was actually true in the Golden Age comics! Phantom Lady, of course, is the daughter of Senator Henry Knight. Black Condor became a senator (in a manner of speaking) in Crack Comics #11. After coming upon the dying Senator Tom Wright, Black Condor realizes that he and the Senator are identical. He then assumes Tom’s identity to vote down a crooked bill and remains the Senator after the real Tom Wright passes. 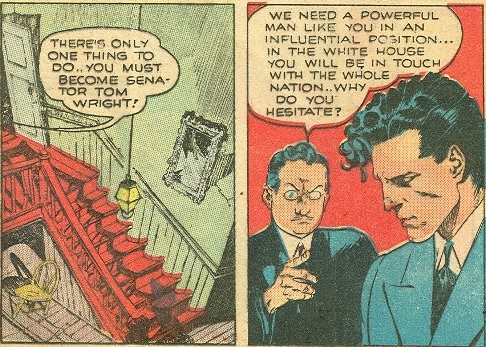 Not exactly democratic and a bit morally ambiguous, but… these were desperate times. I could see Senators Henry Knight and “Tom Wright” working together as they were both concerned with defense.

Alright, that’s it for now, but I will return with some poorly drawn comic pages!

I am contributing a free panel for the never Illustrated issue 18 of Secret Society of Super-villains!!! 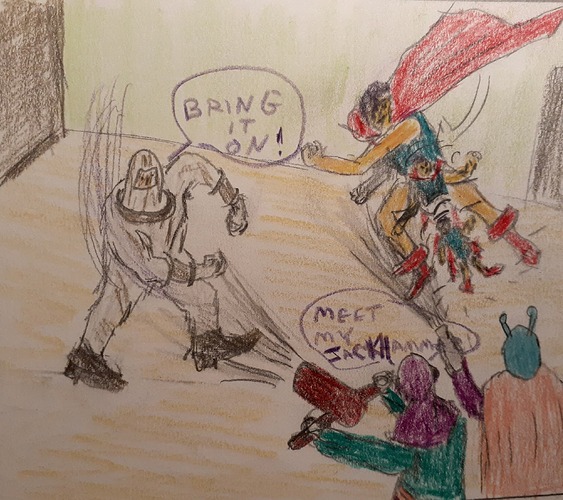 Well this will still be open through tomorrow night!

I am contributing a free panel for the never Illustrated issue 18 of Secret Society of Super-villains!!!

I like what you did! A lot of action, and Doll Man shrinking is very cool!

So, I wanted to do two pages. As is usually the case, though, the project was bigger than I thought. I only managed to finish one panel. Here is where the Silver Ghost has all the Freedom Fighters captured and believes he has won: 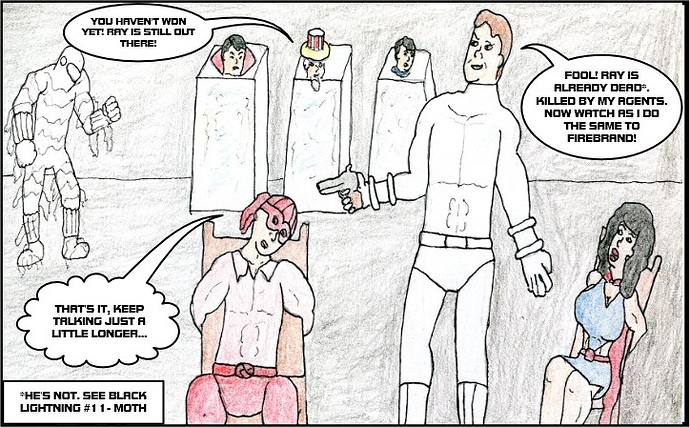 Very slick! Mind sharing if you are using a specific app to get that great lettering?

My panel may or may not have some connection with DC Comics Presents #62 - let’s just call it a “tribute” panel on my part lol.

Very slick! Mind sharing if you are using a specific app to get that great lettering?

I have a program on my computer called Comic Creator by Summitsoft. I got it a while back to help me create my own comics which I never finish. My version is pretty old, but it gets the job done!