Welcome to Week 5 of a very special challenge / contest , reading one single issue a week (as they are digitally published that is) of THE SECRET SOCIETY OF SUPER-VILLAINS (1976) #1-14.

This time around: THE SECRET SOCIETY OF SUPER-VILLAINS #5, as the current storyline comes to a jarring conclusion, and we are whisked away in a whole new set of directions by the new and final writer of the series, Bob Rozakis.

Up til now, Bob had been writing backup stories for Action Comics of Air-Wave, Aquaman and the Atom, and other back up characters for other comics at DC. He had just started co-writing a revival of the Teen Titans with Paul Levitz around when this issue of SSoSV came out. 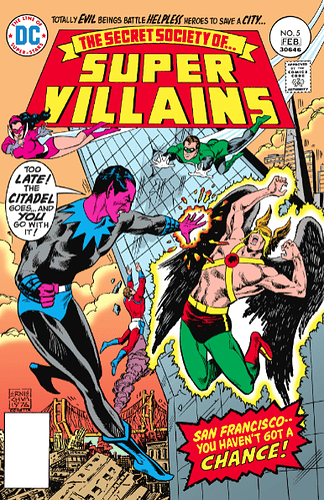 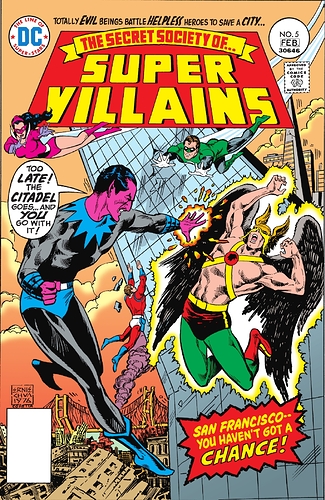 The Secret Society of Super-Villains #5

The War for Earth-Death ends here, with every page-smashing battle you’ve been waiting for! The Secret Society versus the armies of Apokolips! Captain Comet...

I read THE SECRET SOCIETY OF SUPER-VILLAINS #5

And here is the letters page from this issue from back in 1976 along with other goodies…notice the ad for a new Teen Titans series at the bottom of the Letters Page! 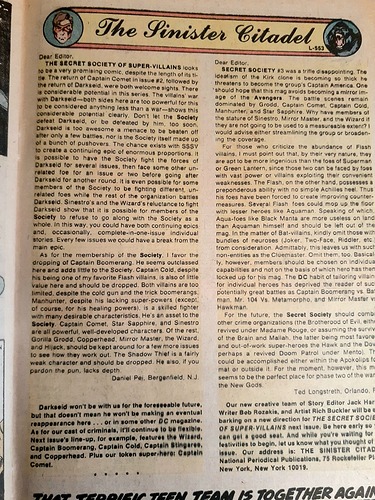 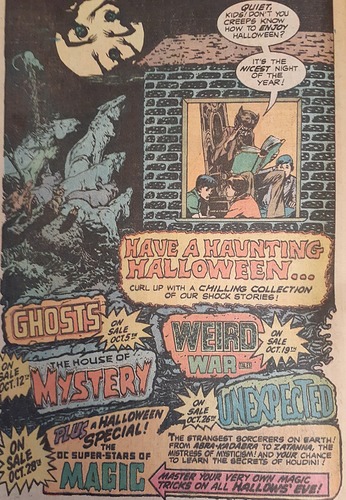 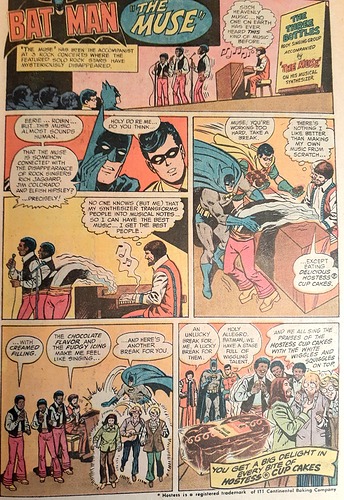 And be sure keep an eye out for our once a month first Thursday evening of the month Listen A Long of the classic 1940’s Superman Radio Show adventures (in the Watchalong aisle). The next one is planned for Thursday October 6th!

Superman Radio Listen Along: Looking for Kryptonite + The Mechanical Man

Superman Radio Listen Along: Looking for Kryptonite + The Mechanical Man

, open to one and ALL!!! NOW FEATURING NO ADS WITH MP4 FILES!! To join the [Superman Fan Club], please click here: Superman fan club - DC Community Two different radio stories: “Looking for Kryptonite” Episodes 5-6, #1179-1180, The Adventures of Superman Radio Show, continuing the storyline after the December 1945 deadly aftermath of “Atom Man In Metropolis” (and WWII), …

All new, all different!

Denny O’Neil steps in to edit as the SSOSV reaches the end of Phase One.

The back half of this issue was where the real fun began. Interesting that DC would admit that there was a superhero operating on Earth before Superman made his debut. Ollie and Carter are up to their usual hijinks. Thank goodness Captain Comet was there or Hawkgirl would be joining the JLA earlier due her husband’s untimely demise. Finally, the setup for the rest of the series is established. Captain Comet will now try to being the entire SSOSV to justice.

As it turns out Captain Comet really did get close to joining the JLA. DC ran a poll in the pages of JLA in 1977 asking readers which three heroes should join. Zatanna won and joined the JLA a short time later. Captain Comet finished second just ahead of a new superhero, Black Lightning.

Rate the explosive conclusion to the Darkseid storyline from 1 to 10, 10 being you loved it?

Ehhhhhh… I think I’ve got to file this one under “did not live up to expectations.” To be fair, it’s tough for any ongoing to go through multiple different creative teams in the middle of a story and for that story to still end up decent. That being said, when you’re setting up a war between a group of evil alien gods and some of the most fearsome villains on the planet then you’re setting expectations for an epic conclusion. A brief brawl downtown that seems to end prematurely wasn’t what I had in mind. We also almost got to see the Black Racer in action only for Darkseid to wave him off. I was just hoping for more and felt like they were shutting up shop on this storyline as quickly as possible so they could move on. I give it a 3 out of 10.

Have you ever seen any Rich Buckler artwork before? If so, any favorite series by him for you?

I’ve seen Rich Buckler art before. I’d probably echo @CaptainYesterday and say that his work on All-Star Squadron is my favorite series out of Rich. All-Star Squadron probably inspired my love of Golden Age characters and superhero legacies. Buckler’s art was a big part of the early issues that encapsulated what that series was going to be and do.

Are you a fan of newcomer Bob Rozakis’ writing on this series yet?

Most of my previous experience with Bob Rozakis comes from his work on The New Adventures of Superboy. I always felt his Superboy stories were kind of fun, but I never liked them the way I genuinely enjoyed Silver Age Superboy stories. So, whenever I see his name in a back issue, I say to myself, “Well, this will be just alright then.” In the case of this issue, did I enjoy it? Not really. But, it would be unfair of me to lay the blame at Bob’s feet considering the creative upheaval this book went through. And, he did manage to throw some fun things in there at the end like the Captain Comet/Sinestro battle. So, yeah, it was fine. It’s Rozakis. It’s just fine.

Did you have any cool “super car” flying vehicle sightings this time around?

Not this time around and that’s a good thing. I almost broke down recently and considered a Super Powers shopping spree. My bank account doesn’t need that…

I agree with the sentiment everyone has expressed concerning Bob Rozakis’ storys: he was a great professional, someone to look up to, and the backup stories, Teen Titans and this storyline are acceptable, entertaining, if not actually among the very top of the crop of Bronze Age tales.

This is the early stage of DC finally being more concerned about overall continuity between their heroes’ series, and I’ll have to now go look up the JL issue where Captain Comet was in the running to join.

Conveniently the poll results are in issue #157, the same issue where Captain Comet has a cameo at The Atom’s wedding.

Speaking of shopping sprees and breaking down, as I type this to you @TheCosmicMoth , I am in the middle of perusing this week’s Friday-Sunday sale on newkadia.com for Superman comics. As I noted in the thread in General Discussion recently concerning “Marvel and DC, Why Can’t We All Just Be Friends” or some such, I was able to calm my comic book addiction down from over $200 a month back in 2015 to present day just under $50 month, thanks to using “unlimited” digital versions of comics but…also allowing myself to spend between $20 to $30 a month on Silver and Bronze Age Superman and Family comics not yet digitized.

That should end up around the price of a Super Powers Superman-mobile with robotic extended arms at Walmart or Target, right? I’ll just have to put all the Super Powers goodies now being reissued on my adult kid’s Christmas’ lists to get Dad for Christmas, now there’s a plan worthy of Darkseid!

I’m itching to answer these questions myself, especially about favorite Rich Buckler runs, but I’ll wait a bit to see if others join in the chorus here first! I will admit it’s NOT the series you and @CaptainYesterday have mentioned. For me, the key artist for All Star Squadron of the 1970’s is Wally Wood!

thanks to using “unlimited” digital versions of comics but…also allowing myself to spend between $20 to $30 a month on Silver and Bronze Age Superman and Family comics not yet digitized.

This is probably the best way to do it. I buy too many new comics when sometimes I feel like I should concentrate on the retro ones I’d really treasure and can’t read anywhere else. I just still get too jazzed from discussing the current stuff…

I do enjoy the art of Wally Wood. I always immediately associate him with T.H.U.N.D.E.R. Agents, though. That book was waaaaaaaaaaayyyyyy ahead of its time.

That’s great about the Adventure Comics find from the 50s! I have a comic from the 50s as well I got for a decent price at the summer flea market we have in the area a year or so ago, a Tom Corbett Space Cadet comic, Dell I believe.

Speaking of budgets, are you aware that you can read all of the Tower Comics T.H.U.N.D.E.R. Agents series for free (and it’s legal because they totally goofed up the copyrighting)??? 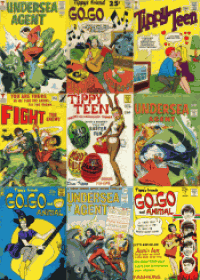 Harry Shorten founded the Silver-Age publisher Tower Comics in 1965. The two other key personnel were Wally Wood and Samm Schwartz. Tower Comics was only

Speaking of budgets, are you aware that you can read all of the Tower Comics T.H.U.N.D.E.R. Agents series for free (and it’s legal because they totally goofed up the copyrighting)???

Oh, I am aware, I am aware… it’s my bread and butter! But, thanks! I couldn’t remember the publisher so I was searching my Public Domain comics folders for awhile after mentioning the Agents!

Another note concerning comic book addiction, I’ve actually been picking up, of all things, the DC Archive hardcover version of these free comics … I think I have one or two more volumes to go. Sad

For me, the key artist for All Star Squadron of the 1970’s is Wally Wood!

Thanks that’ll save me some hunting!

I’ve actually been picking up, of all things, the DC Archive hardcover version of these free comics

Hey, I get it. I like having physical copies of comics because I just feel more comfortable with the book in front of me. At least there are still a lot of great Public Domain comics that there aren’t hardcovers for! That’s why I love sites like Comic Book Plus and Digital Comic Museum. I get to read classics that I would not be able to find/afford otherwise.

Okay I’ll go ahead and give a few more comments on SSoSV #5 before we fully dive into the age of Bob Rozakis’ with the new selection later today.

So I’ll call it a 5.1 out of 10. Let’s just say this: I didn’t exactly see it coming that the clone would blow himself up. But having it all happen within the less than halfway through the comic was a bit disappointing.

From the mid 70s on I would often buy a comic book just because Rich Buckler was the artist. I first encountered him when he was actually a writer as well as an artist at Marvel in their Astonishing Tales comic, which I don’t think he did much after the series in the early seventies: so yeah probably because the character was so cool and science fiction-y and apocalyptic… Deathlok the Cyborg made me a super fan of Rich Buckler: 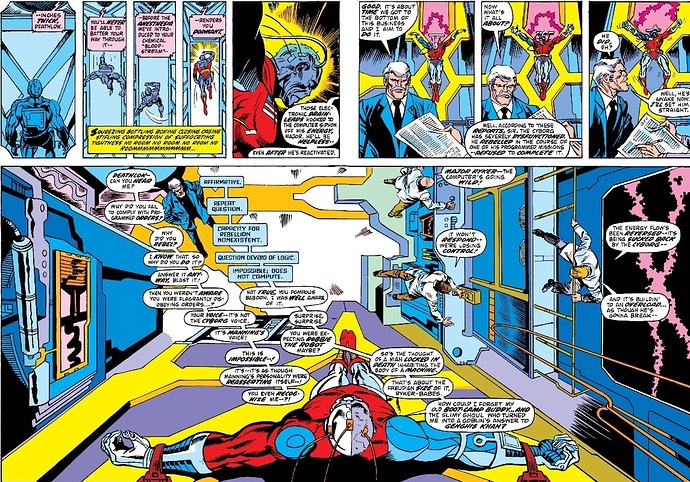 I totally agree with what everyone else is saying; this fellow The Answer Man Bob Rozakis’ is competent, he has a nice sense of humor, and boy does that come up in the next issue oh my.

He seemed to have an angle with Green Arrow’s dialogue which didn’t exactly make me love Green Arrow in this particular comic. Considering what a wonderful series was published around the same time with Neal Adams drawing, it did seem to come off flat with that part. So, he’s “ok” as a writer, no Marv Wolfman…but more a Len Wein (Mr. “Spider Mobile”).

I am so disappointed, not a flying car to be seen. Well, let me tell you, I’m going to put this on my wish list right now on Amazon for my adult kids to get me some of them there reissued Super Powers flying vehicles!!!

One other comment: I was mystified as to who this person in red and blue mittens was supposed to be in the Justice League: 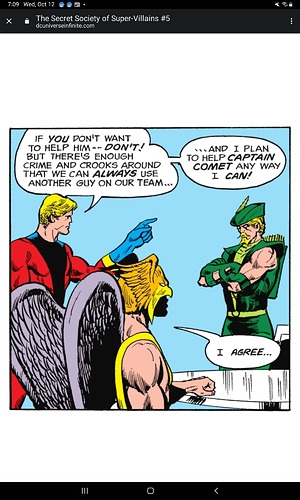 I was reasonably certain I knew, but the way they drew the body and the color of the hair totally threw me. So I combed through the issues of Justice League of America around that time and finally found an appearance of Ralph Dibny the Elongated Man with proper “thin” proportions and hair color.

Any other comments before we close the drawbridge on the moat here?