Welcome to Week 2 of a very special [Superman Fan Club] challenge, reading one single issue a week of The Secret Society of Super-Villains (1976) over a three month timeframe!

This time around: Bronze Age! THE SECRET SOCIETY OF SUPER-VILLAINS #2, continuing with the history-making run started by Gerry Conway at his finest and artist Pablo Marcos…and the return of Captain Comet… but, is he a hero or a Super-Villain!!! 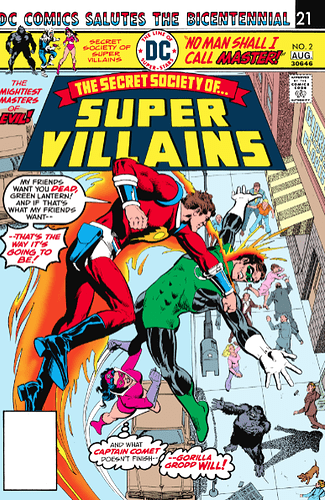 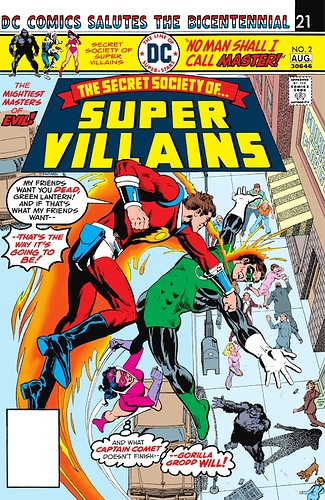 The Secret Society of Super-Villains - #2

CAPTAIN COMET RETURNS! After spending decades in space, Adam Blake has once again touched down on Earth. But when the Society hoodwinks the spacefaring...

Also, be sure to look at Page 8 in full page mode!

I Read THE SECRET SOCIETY OF SUPER-VILLAINS #2

Here are the latest exciting standings of this very special limited-edition of Secret Society of Super-Fans Challenge!

And, lastly, here is the Sinister Citadel page at the end of issue #2 from my personal copy of this issue, sadly not part of the digitized version here on DC Universe Infinite: 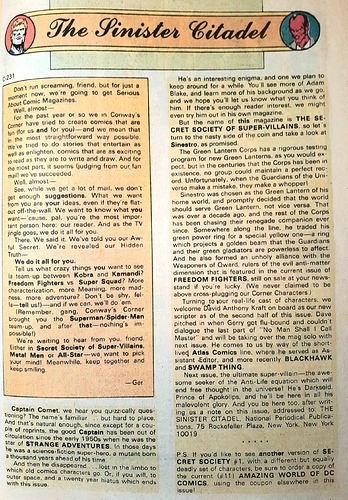 Do you like how the plot is thickening this time around?

Yes! I liked this issue a lot more than I enjoyed the first. The inclusion of Darkseid and co. is what did it for me. Since this came out in 1976, that would make this an early example of another creator using elements of Jack Kirby’s Fourth World in their stories. …Maybe even the first example? Does anyone know? The second Mantis showed up, I realized exactly who the mysterious benefactor was and I was pumped. This opens the door for a lot going forward.

Were you excited to see Captain Comet return?

Yeah. I’ve always liked Captain Comet. His name just screams “space adventure!” I enjoyed his time in L.E.G.I.O.N. and loved his appearances in Grant Morrison’s Action Comics. He has an interesting backstory which was well-summarized here and makes him a unique character in any situation.

Is this Manhunter an evil villain or something else in this issue?

Good question. Paul Kirk was always a hero but, as I understand it, his clones were mostly pretty villainous. The whole Manhunter legacy, in fact, wildly swings from good to evil to this very day. In this story, we meet him as an organizing member of the Secret Society. Not great. However, in issue #2, he reveals himself to be a double-agent. This could be a trick, but, for now, I’m inclined to believe him. He shows the rest of the Society one of Darkseid’s Evil Factories. I imagine Manhunter does not look kindly upon the Evil Factories as they are set up to clone individuals for nefarious purposes just like how The Council created him. Basically, it hits pretty close to home for him, so I don’t think he’s lying this time. I may change my mind later depending on how things pan out.

Thank you for stopping by, @TheCosmicMoth ! That’s a great question if this was the first time that Jack Kirby’s Fourth World / New Gods creation was used after he was done writing the initial wave earlier in the 1970s. I was wondering the same thing and it turns out Comic Book Herald would agree that this is the first time that another writer tapped into that world!

Speaking of which, I was delighted to see that our local Walmart finally has the “new” Super Powers toys on display, originally issued in the 1980s. which was another time the Kirby’s Fourth World returned, this time with Kirby involved.

I was wondering the same thing and it turns out Comic Book Herald would agree that this is the first time that another writer tapped into that world!

That’s good to know for sure! Thanks for doing the research. I was having trouble figuring it out for sure.

the “new” Super Powers toys on display, originally issued in the 1980s. which was another time the Kirby’s Fourth World returned, this time with Kirby involved.

I thought of that, too. Considering that action figure line is coming out, this is a good time to read this story. However, I’m trying to ignore those toys because I really shouldn’t be spending the money on them

I’ve been scoping classic Supermobiles on eBay ever since Superman and The Authority… I keep giving money to DC and they keep giving me reasons to spend more.

This is the first issue I bought as a kid and I’m sure the main reason six year old me bought it was because of how cool Captain Comet’s costume looked. He is still among my favorite DC characters to this very day and the only mutant in all of comics that I like.

That also means this was my first encounter with the Fourth World and its greatest character. (no not Mantis)

I’ll give it a 7/10 as the plot picked up a bit and the group is a bit more focused in size.

This Manhunter didn’t really make much of impact on me. It was the next one in Englehart’s JLA that I really took note of.

Due to the #1 issue re-write fiasco, Gerry Conway has a co-writer this issue in David Anthony Kraft. He’ll be writing the next few issues off Conway’s notes.

Wow that’s cool that you remember this issue so well. My first comic around that age was The Adventures of the Fly by Archie Comics and I am honestly not sure which issue it was. I’ve picked up three or four of them in the past several years and really enjoy the covers, but I don’t know that they’re the ones that I got during a trip to New York City around that age.

I wonder how much the alliteration of the name of the series as well as the well-designed logo (and the fact that Gerry Conway was originally the writer) was what drew us as well to purchase this series back in the day.

Well, that was a pretty full story, wasn’t it? It had everything: a talking, intelligent gorilla, cool costumes, a mutant, and an energy vampire NOT named Colin Robinson!

Because it was the '70s and everything was cool and new in the seventies I’m telling you!!

That goes without saying.

Anyone else want to join in on the fun here?

@Beniac-5 “The plot in issue #2 is beautifully nuts. I was initially confused at Comet’s behavior, but it was completely worth it to read through the successive reveals throughout the issue. I am very interested to see how the collected villains react to the revelation at the end of the issue. How does evil react to a greater evil, if that makes any sense?”

Thanks for joining in the discussion again @Beniac-5 ! It’s always an interesting theme when we see people and groups we always consider “evil” and prison-bound suddenly having to help normal society fight even worse evil.

Stephen King’s “The Dome” is one example where the sheriff and his buddies are being looked at to get everyone out of a jam, but it turned out the sheriff etc were knee deep in drug trafficking, killing folks, etc.

So…there is no SSoSV this week! I’ll instead post the next in a separate “competition” we were running this spring, stay tuned!

I did want to note a couple of highlights before we go on to issue 3 today! 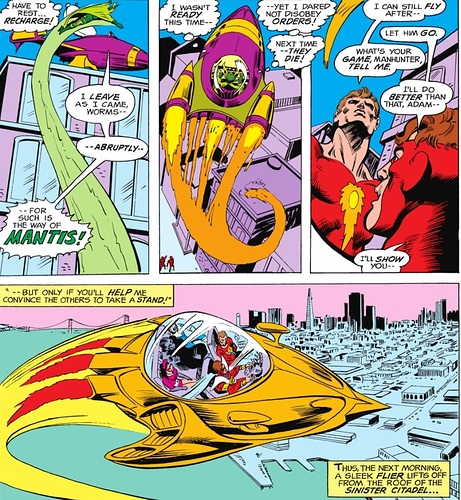 @Vroom Did DC produce any flying car toys like this before Super Powers? 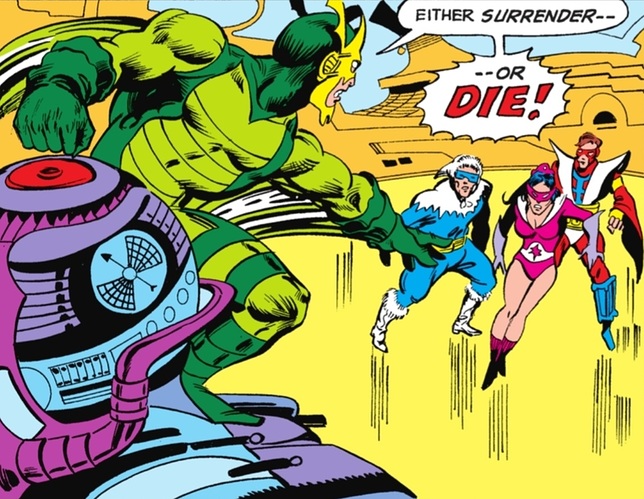 Back when I was playing role-playing games like Gamma World, I would get in so much trouble for pressing the red buttons that would appear in elevator shafts lol.

@Vroom Did DC produce any flying car toys like this before Super Powers?

Seriously though, no toys like that existed prior to Super Powers, and sadly, none really came to exist after Super Powers.

The closest would be this fine bauble: 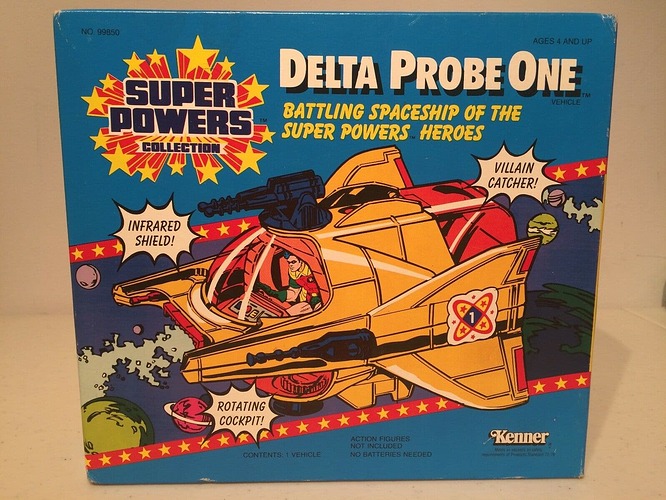 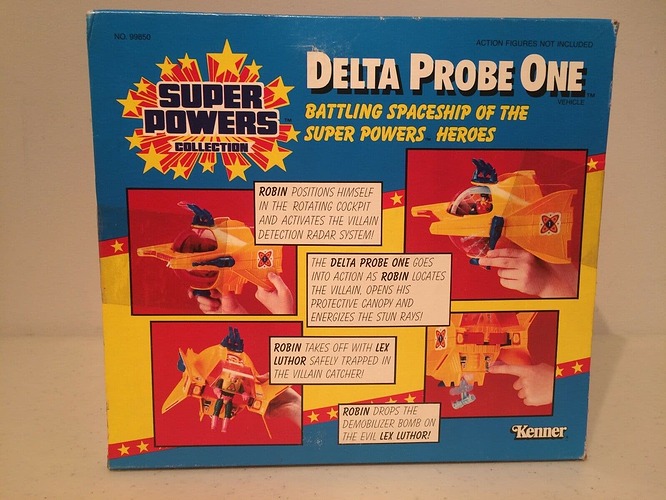 I don’t own the Delta Probe One, so I can’t expand upon it from a personal standpoint. However, and with the aid of one’s imagination and creativity, it could easily stand in for a Kryptonian flyer.

Thanks @Vroom
I appreciate your knowledge of these things!