Welcome to Week 15 of a very special challenge / contest , reading one single issue a week (as they are digitally published that is) of THE SECRET SOCIETY OF SUPER-VILLAINS (1976) .

This time around: THE SECRET SOCIETY OF SUPER-VILLAINS #15, with Bob Rozaskis (the Answer Man) back as writer, Mike Vosburg, Artist, and Bob Smith, inks! 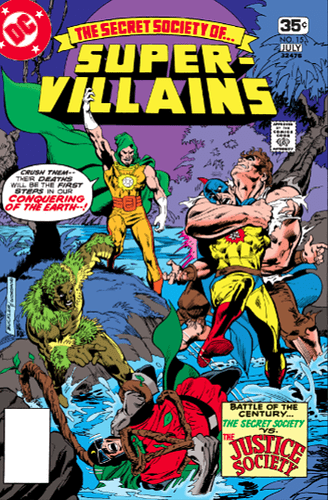 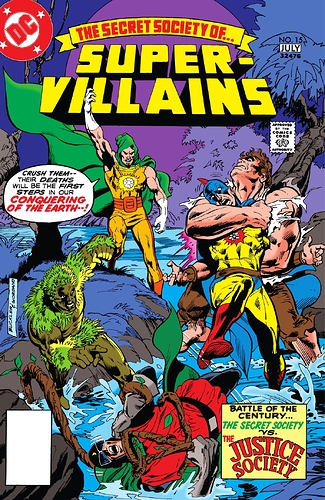 The Secret Society of Super-Villains #15

Click below to go to Volume 2 of The Secret Society of Super-Villains, then go to page 221 for this issue- if you have Ultra.

I read THE SECRET SOCIETY OF SUPER-VILLAINS #15

Here are the parts of this week’s comic book that have not been digitized by DC Universe Infinite Ultra: 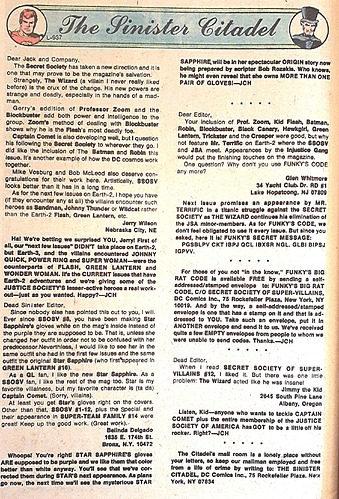 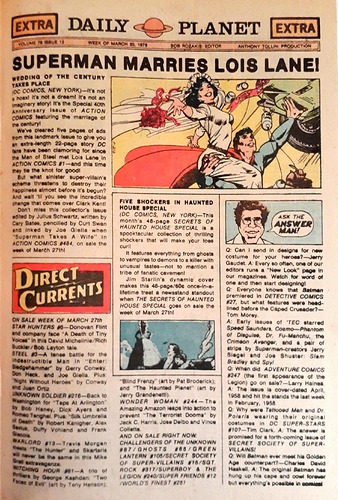 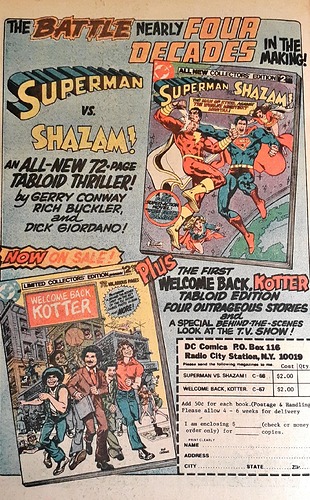 Hawkman (and Hawkgirl) in Showcase! 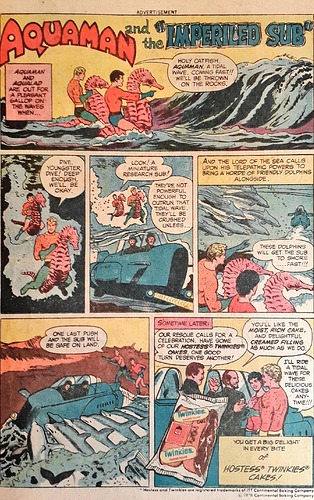 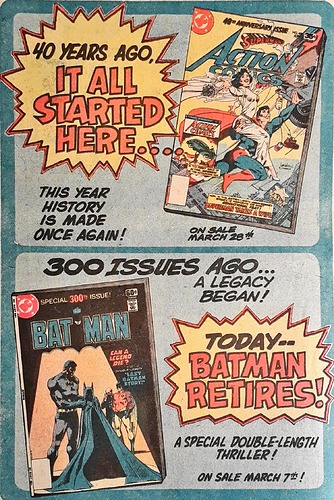 And be sure keep an eye out for our once a month first Thursday evening of the month Listen A Long of the classic 1940’s Superman Radio Show adventures (in the Watchalong aisle). The next one is planned for Thursday January 4th at 9 pm ET!

I do have DC Universe Infinite Ultra, so I do plan to read this one.

There, I read it!

And that was it. Although the Wizard does appear in Action Comics #484. The next time we see the SSOSV is a year later when they are back on Earth One getting the JLA involved in an “identity crisis.”

I’m going to answer questions #1-3 now and then come back for #4 because I like the question and my answer might go long. Anyway…

Which of the two battles this issue is your favorite? Why?

So, the Doctor Mid-Nite vs. Reverse-Flash and Plant Master battle is the MUCH better fight. The villains being momentarily stymied by Mid-Nite’s blackout bomb was a nice touch. However, I’m going to pick Atom vs. Blockbuster for this panel: 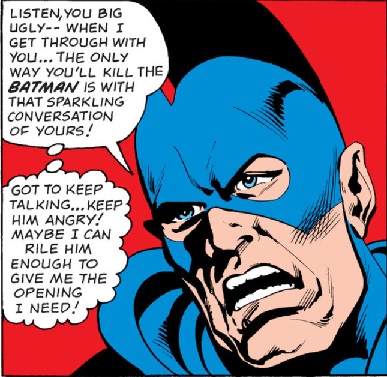 The opening you need??? You just hit him with your best shot! What are you going to do with an opening, Al? Run away??? Because that’s your only play here…

Back on “regular” Earth, a new team assembles. Who are your favorite villains on this new team?

Well, I have to say Killer Moth. He’s my cousin and Christmas would be pretty awkward this year if I didn’t choose him. I also think Chronos is pretty underrated. I mean, he’s a time traveler. That’s a lot of power!

Do you like the overall theme of the series currently to have the Secret Society of Super-Villains fight various Hero Teams deliberately as their main focus?

I’m really enjoying it! I love the multiverse and multiverse stories. It’s also given the book the direction it’s needed for a long time. I look forward to the showdown with The Freedom Fighters on Earth-X!

I got to go look up that crossover a year later, thanks for the tip!

I’m thinking next week we take a look at the issue that was never published.

It took me a couple seconds to figure out what you meant by he was your cousin LOL.

I’m also a big fan of a lot of the iterations of the Freedom Fighters and would love to see if that pans out. Maybe it’ll be in the never published issue next week.

If you were writing this series, which villains and heroes from the 1970s would you select, and what would be your first storyline?

Alright, so here’s my concept for the Secret Society of Super-Villains. First, we’re going to really emphasize the secret society aspect of the team. We’ll make a bigger deal of their code language; we’ll give them a secret handshake and signs; and we’ll give them an initiation ritual complete with blindfolds and an oath. Our members will be called “initiates” and they’ll be working to become worthy of being “grandmembers.” No one will know who is running this, but there’ll be rumors that it’s a heavyweight like Luthor or Sinestro. Only the best get to join their upper echelon as a grandmember. In this regard, we’ll keep Funky Flashman around as the figure who hands out assignments. We can even have the new Sinister Citadel be Mockingbird Manor and have Funky pull the mission details out of that bust of Kirby’s head like in Mister Miracle # 6.

For my members, I don’t want anyone too notable. I want to emphasize that these are c-list villains being recruited to make their big break. I also wanted each member to be an enemy of a different member of the Justice League, with two notable exceptions which we’ll get to later. Anyway, my core team will be Merlyn, Mirror Master, Fisherman, Angle Man, Terra-Man, Copperhead, and I’m keeping the “French” version of Star Sapphire.

My eighth member and the main character of the series will be the “Trickster.” However, this Trickster is obviously not Giovanni Giueseppe. This Trickster has brown hair, no anti-gravity boots, and his “tricks” comprise of conventional weapons rather than over-the-top gadgets. He claims to be the new Trickster since the other one was pinched by the Flash. This bothers most of the other members, particularly Mirror Master. However, this brings Trickster and Star Sapphire closer together since the other members also don’t recognize or trust her. They inevitably become romantically involved. Essentially, this new Trickster will be the reader’s window into this new world. He’s new and confused just like we are.

Each story arc of my Secret Society run is going to be a mini heist of important locations in the DCU like the Justice League Satellite, Atlantis, S.T.A.R. Labs, GCPD, Ivy University, and finally the Flash Museum. At each heist, the Secret Society steals a part to what is called “a very special device” that will help the Society achieve their “ultimate goal.” After each mission, the team loses a member. Either one of them gets captured by the Justice League or one of them disappears and Funky tells the team that member has been selected for “grandmember initiation.” Every time this happens, the villain in question leaves behind a gadget that our new Trickster adds to his arsenal.

As this goes on, Trickster has these recurring nightmares. In these dreams, he’s visited by the Norse god Odin. Odin refers to him as “Loki” and urges him to “find Thor.” The raven god says, “This nightmare world will not end until you find Thor.” When we get to the end of my run, there are only three members remaining: Trickster, Star Sapphire, and Copperhead. After the Flash Museum heist, when the team steals the shell of the Cosmic Treadmill, Star Sapphire confronts her lover. She tells him that she’s been looking into him and learned that there was no record of him being a villain prior to the Society and she can’t figure out who he really is. She demands answers. Trickster looks at the women he loves and suddenly she morphs into Odin. He starts to move toward her, she frantically tries to defend herself, and everything goes black. Then, there’s another Odin nightmare. The god’s costume has started to take on color. Odin says, “The time is nigh. Take the serpent and find Thor.”

When Trickster wakes up, Star Sapphire is gone. Funky calmly assures him that she’s been taken to “grandmember” initiation and tells him it’s almost over. The surprise ninth member enters the scene in the form of the Reverse-Flash. Thawne uses all the parts that the Society has stolen to rebuild the Cosmic Treadmill and uses it to take Trickster and Copperhead to Earth-X. Once they get there, Reverse-Flash takes his leave reminding Trickster that his staying was not part of the deal. Trickster and Copperhead make their way through a city in Earth-X. As they progress, the weather turns overcast, and Trickster becomes sure of his purpose and his mission. As night falls and it begins to rain, they reach their destination: a quiet house in the suburbs. The name on the mailbox reads “Richards” and, as they sneak into the backyard, we see a doghouse with the name “Thor” printed on it.
The dog, Thor, attacks Copperhead and takes him out of the picture as Dan Richards, the Manhunter of Quality comics, comes out back to see what the trouble is. Here is our climactic battle as Trickster uses all the weapons he’s acquired to try and kill Dan Richards, Manhunter. Overmatched but resilient, Richards is able to desperately defend himself by taking out each Trickster weapon until Trickster is only left with Mirror Master’s Mirror Gun. Trickster starts creating mirrors with the gun to confuse Richards, but he catches his own reflection in one of the mirrors. Odin appears behind him in the reflection. Then the reflection morphs and it’s no longer Trickster and no longer Odin. It is the Manhunter, Paul Kirk, and the Manhunter Grandmaster.

The Grandmaster reflection explains that Trickster is really the last clone of Paul Kirk. His mission was to destroy the pretender, Dan Richards. However, he needed a way to reach Dan on his alternate Earth home. He hatched a scheme to obtain the means of multiversal travel while making sure that evildoers were punished along the way. Using his knowledge of Manhunter cult organization and rituals, he created the Secret Society to trick villains into aiding his cause. The villains would then either be captured or he would imprison them in his secret jail under Mockingbird Manor. While Paul is distracted by this hallucination, Dan kicks the Mirror Gun away from him. The two struggle until Paul comes out on top and is about to stab Dan with a combat knife. The knife melts in Paul’s hand before he can deliver the killing blow. Having been alerted of the multiversal incursion, the Justice League and the Freedom Fighters converge on the scene to set things right.

Back on Earth-One and in the Justice League’s custody, Paul takes the League back to Mockingbird Manor where they start dismantling his operation. Funky is taken into custody and as he is walked past Paul, he asks him, “Did you do it, boss? Did you get him?” The League frees the Society members locked in the secret jail under the manor and takes them into custody. However, Green Lantern tells Paul that they couldn’t find Star Sapphire. Hal asks, “Where is she? What did you do?” The last clone of Paul Kirk sinks to his knees and cries.

Wow! I definitely like the motivations for the villains actions much more in this particular storyline that you have come up with! Nice way to tie in the Manhunter original theme.

Poor Captain Comet though, left in the cold of space…

Thank you! I wanted to take a lot of the original concepts and give them more direction.

Don’t worry about Captain Comet. He has a big role in my Legion run…

Anyone else stopping by for the Ultra Express?