[Superman Fan Club] PRESENTS: The Issue a Week of Superman Silver and Bronze Age **Challenge of the Superfans** WEEK 5!

[Superman Fan Club] PRESENTS: The Issue a Week of Superman Silver and Bronze Age Challenge of the Superfans WEEK 5!!!

Welcome to Week 5 of Challenge of the Superfans contest, where we are reading one single issue a week together from the currently- digitized DC Universe Infinite collection of Silver and Bronze Age Superman and Family comic! 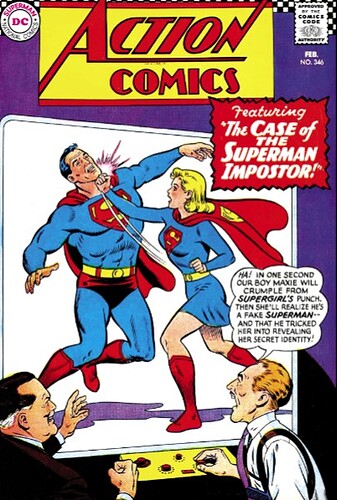 “The Man Who Sold Insurance to Superman”
and
“The Case of the Superman Imposter.”

Note in the voting below when you have looked over this issue by noting “yes.”

Your icon will appear so we can track who is the most SuperFan of all in the coming months!!!

The Challenge of the Superfans to date!

Well, as to the first story just goes to show money can’t buy you happiness, without the important things in life live love and friends. As to the second, an interesting slip of identity by Supes, and Supergirl falling for the con and not living up to it and telling Supes, resulting in the villains death, not very heroic, if you ask me.

THE MAN WHO SOLD INSURANCE TO SUPERMAN

Wayne Boring returns to draw Action Comics with Leo Dorfman spinning this tale. Once again, we have a story that is completely unlike comic book stories of today. “Jewel Cartier” now that’s the name for a rich girl. Mr. Cartier has a spy monitor for his competing insurance company rival? He’s about one giant robot from discount Luthor territory. My life insurance policy isn’t for a hundred billion dollars, but I have the same premium? I need to call my agent. Supergirl saves the day in one panel. Mr. Cartier loses everything but his money. He was sad for about ten minutes until he realized he didn’t have to buy his daughter expensive stuff anymore.

THE CASE OF THE SUPERMAN IMPOSTOR!

Robert Bernstein came up with this story and it is drawn by Jim Mooney. The Torpedo, back when you could have a cool villain name and still just be a guy with a gun and a bomb. Good guess by the professor, but if he was so confident he should have had a camera instead of just binoculars. Perhaps he should have used that monitor for Superman and Supergirl’s daily patrols? As we’ve seen in other issues, Superman’s daily schedule is printed in the Daily Planet. I guess that simplified things. With friends like these three, who needs enemies? Boy they’ve really got Supergirl in a tight spot. How will she get out of this? I must admit, the first time I read this story I did not see that twist coming and I chuckled a bit when it happened. Not Supergirl’s finest hour.

Thanks for joining in on the fun again this week @CaptainYesterday .

I have a special place in my heart for Jim Mooney art, he’s very distinctive.

Those sales figures are startling. Then again, so is the price tag of a current regular 23 page issue of Action.

I agree that Supergirl isn’t very heroic in this. I should have seen the bad guys deaths coming once they knew the secret identities.
The plastic surgery being so good reminded me of 70s TV shows.

Wayne Boring is probably one of my favorite Superman artists, although I always associate his style with the 1950s, so it’s odd to see a newly drawn story of his in a 1966 issue. In fact, I thought at first it may have been a reprint. 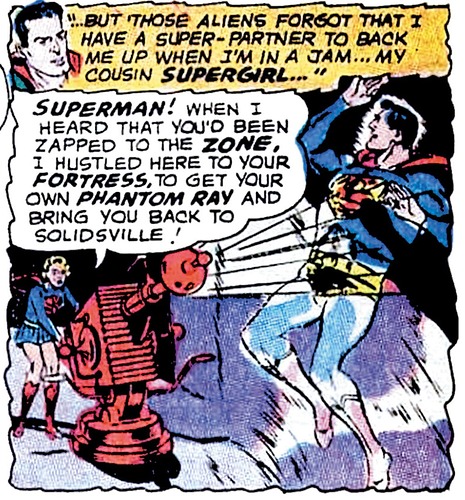 And now he becomes Lex Luthor. 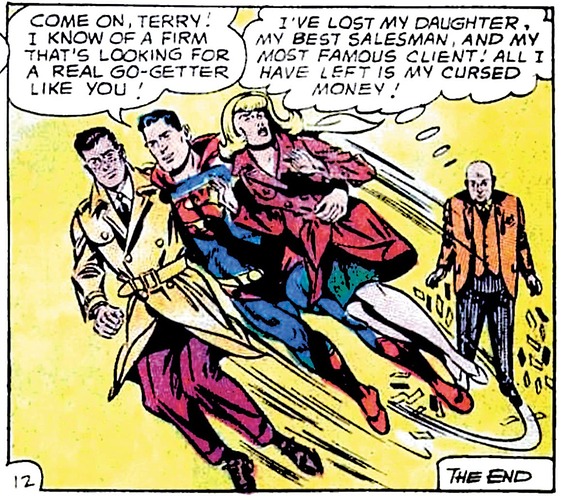 That’s how we talked back in the mid-sixties, Daddio, lol!

Yeah that guy does look a little like Lex from the distance.

Oh I need to make you a capital B on the chart, oops

A lot to unpack here, thanks for letting me use me own threaded posting to ruminate (and begin to recover from) this classic slice of Silver Age Rhubarb pie! 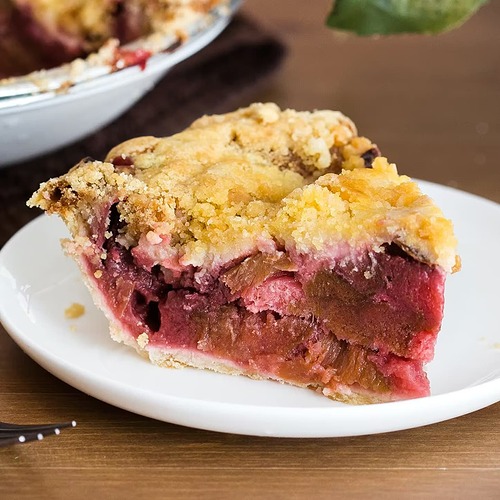 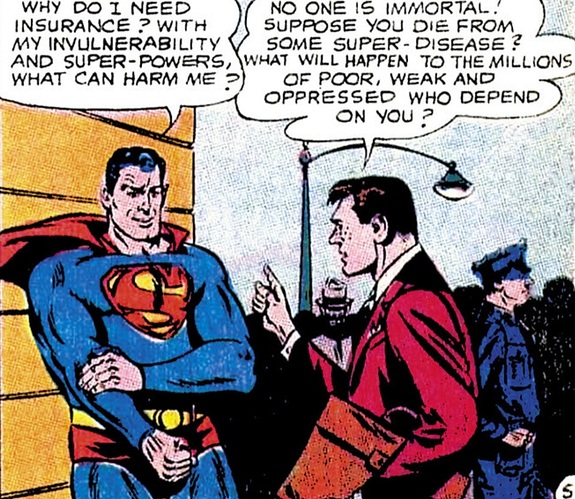 I admit, that’s a pretty compelling reason for Superman to get a large life insurance policy. Of course, by today’s standards, there are actually individuals who probably have even larger policies (but please never let an employer take an insurance policy out on you, it seldom bodes well when revenues are down). 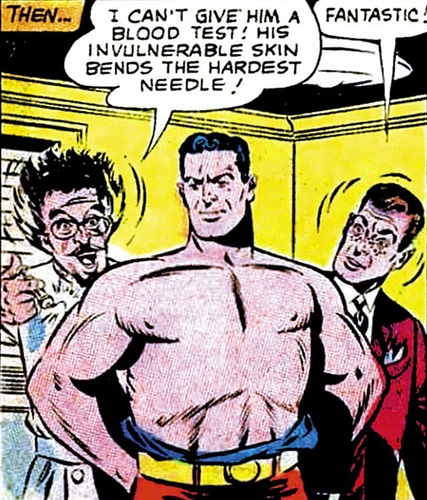 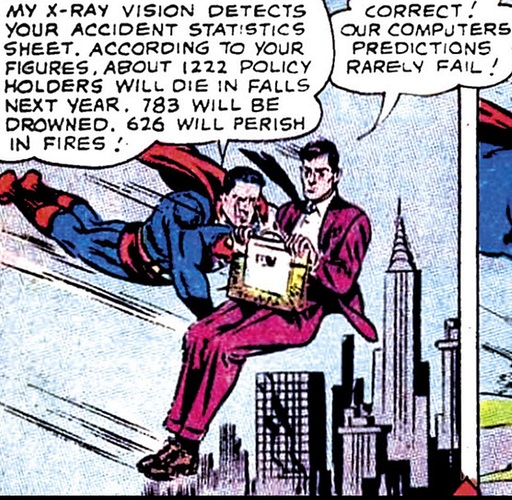 Hey, Supes, you know you just irradiated this guy with poisonous X-Ray radiation and he’ll be a goner right after the wedding, right?

I’ve always found insurance actuary tables that statistically calculate my odds of dying at certain ages from certain things disturbing…I’m surprised Vegas isn’t in on this action legally yet. “$200 on Don-el getting an obscure disease on the 17th.” 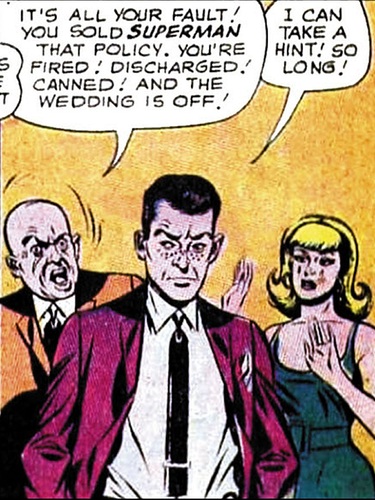 This scene very much reminds me of the Metamorpho romance issues with Sapphire and her evil pappy that was being published around this same time. 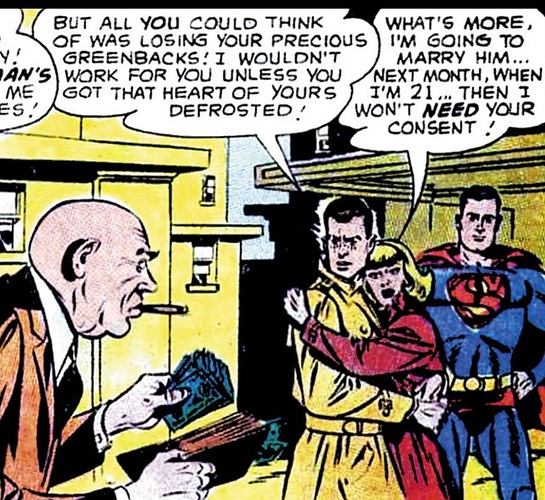 Hee hee…once I’m 21 I can get married without consent…that was a thing back then? 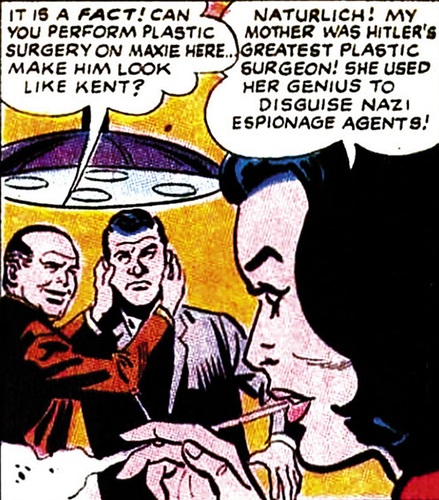 Wow, this is as super depressing as some of the early 1950’s mystery movies where everyone was dead by the end except the starlet. Of course it’s a villain associated with Nazi Germany, just the way things were in the '60s- our top rocket scientists were former Nazis, why not our top villains too? 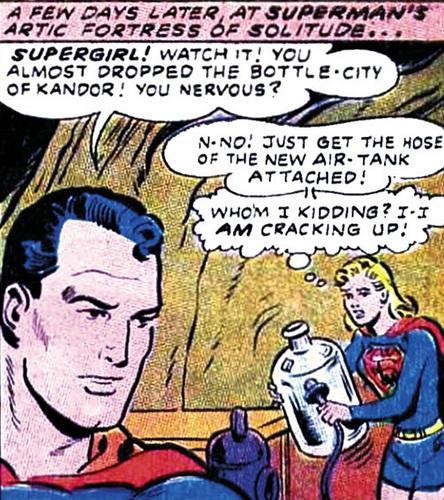 Odd coincidence, more than once we see Supergirl in the Silver and Bronze Age almost or specifically bursting Kandor. What is she doing anyway, does the air need changing like water in a fishbowl?

What is she doing anyway, does the air need changing like water in a fishbowl?