[Superman Fan Club] PRESENTS: The Issue a Week of Superman Silver and Bronze Age Challenge of the Superfans! Week 2

[Superman Fan Club] PRESENTS: The Issue a Week of Superman Silver and Bronze Age Challenge of the Superfans WEEK 2!!!

Welcome to Week 2 of a very special challenge / contest for any who are brave and bold enough to join us in reading one single issue a week from the current digitized DC Universe Infinite collection of Silver and Bronze Age Superman and Family comics for either a year or until everyone screams “Uncle!” 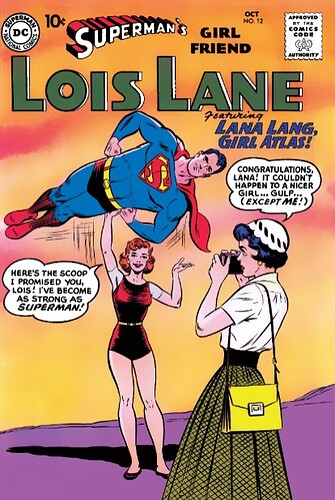 Note in the voting below when you have looked over this issue by noting “yes.” Your icon will appear so we can track who is the most SuperFan of all in the coming months!!!

Be sure to discuss below and / or post favorite panels from this week’s Silver / Bronze Age Super Treat!

Naturally, the human doctor decided to replace her crushed legs with a fish tail.

Maybe you’re wrong about Dr. Hanson’s skills, Arthur. Or at the very least, you might want to reconsider his ethics.

On a side note, I love how the comic acknowledges that Hawaii had just been added as a state.

An early example of body-horror, yikes!

I got to say as Lois was first getting used to being a mermaid, I was thinking, that would be cool to be able to be underwater like that for long periods of time without a bunch of scuba gear.

Personally I was highly entertained by the second story of Lana getting super powers.

I mean who doesn’t want to be mean to rabbits? 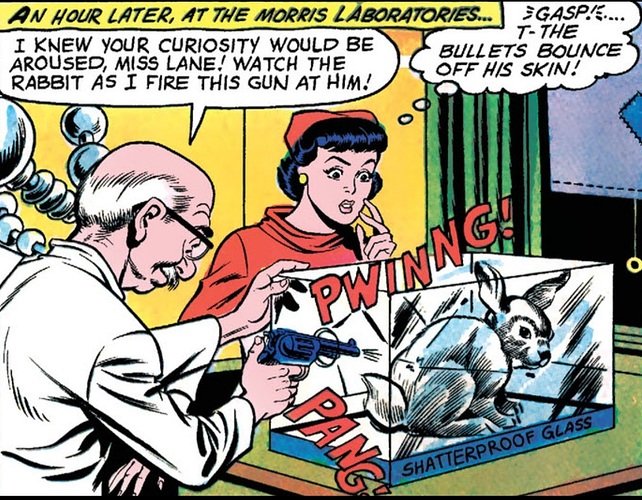 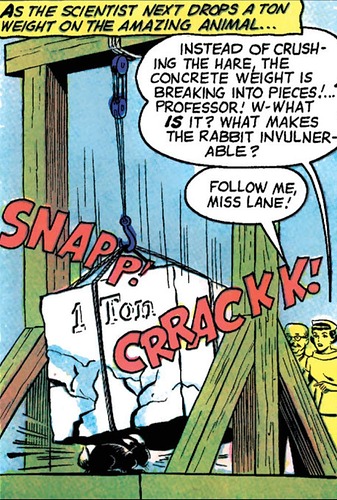 I think I enjoyed the first story best. The super surgery is definitely silver aged silliness though. The underwater art on page 2 stands out as really impressive to me. I also enjoyed the 50th state inclusion.
These stories certainly wouldn’t fly today though. Lana is body shamed for becoming muscular.

Apparently this kind of competition is what it takes to get me to read on a regular basis! Good going @Don-El! Way to tap into my procrastination brain’s need to thrive on a deadline!

Ok, so right off the bat I’m sold on this issue. Lana stealing Supes from Lois and she’s jealous? I’ll get the popcorn 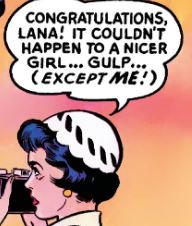 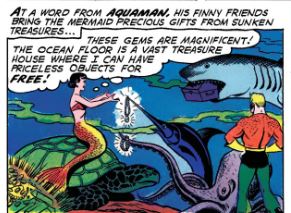 aaaaaaaaand ya lost me at eel ladder

My little monsters beg to differ 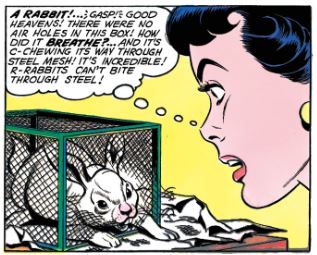 Lana, do you think another steak dinner and dessert will make up for this one too? 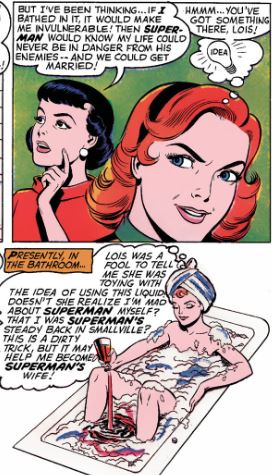 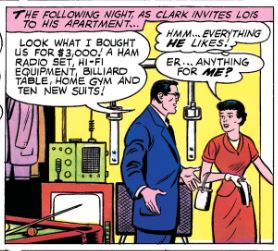 I knew Lana needed therapy but wow she’s got issues. 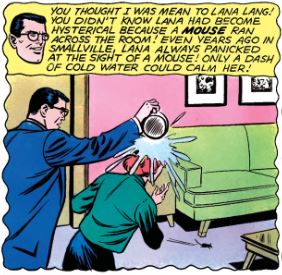 Omg this was such a fun comic! Great pick @Don-El!

Yup, I run these clubs for the same reason you’re finding it helpful to have a contest to set aside time to read, lol. I hate to tell you all the digital comics I’ve got piled up between Comixology Unlimited and Marvel Unlimited that I really really was planning to read but there’s not a club to push me to do so for the those two.

I almost wish I could have just done one story at a time of this three in LL 12, all are way way over the top …it’s like “I Love Lucy” times 3!

An early example of body-horror, yikes!

…followed by the body horror of Lana having a body type that fell outside of contemporary feminine standards!

I summarized all three wild plot lines to my wife this morning first thing as she was working on assembling our tree for the holidays. She thought all three were pretty entertaining.

Three tales typical for the era, Lois pinning for Superman during the experience of a lifetime, Lois thinking Clark is Superman and wants to marry him, even if he is a jerk, and Lana getting strong and being a better match for Superman. All enjoyable, but all Are representative of the repeative theme of her comics. That well written stories do overcome.

Lana as a strong person was pretty comical, if slightly inaccurate in how women that become weightlifters actually look: 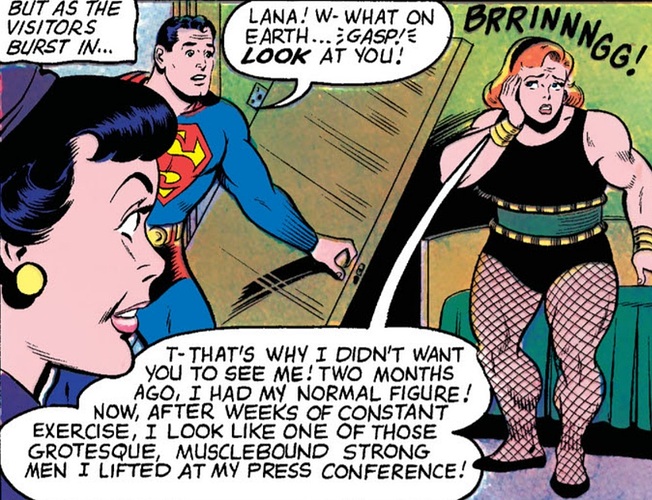 The other thought that strikes me is: these are supposed to all be “in continuity” at the time this was published. There were separate stories even crazier that they called “imaginary”… wow, just wow…

The writer of this chapter (and probably all three) is Robert Bernstein who is the normal writer for the Aquaman feature in Adventure Comics at this time. He would help create Aqualad four months later. He also wrote features for Green Arrow, Congo Bill, Jimmy Olsen and some Superman stories. Among his stories is the first appearance of Metallo earlier in 1959.

In case you’re wondering, Mera isn’t invented for another four years, so Arthur is free to mingle.

As usual, Topo is the one who has to save the day.

From my review of Action Comics #337
“Also odd is that a fellow doctor asks if Superman is licensed to perform surgery and Lois mentions he is from a story in Lois Lane #12. Continuity!? In a Silver Age DC comic???”

GIRL ATLAS
“Rabbits can’t bite through steel!” I know a few gardeners that would disagree with that statement Lois.

A liquid that makes people/ animals super strong and invulnerable. Ask Superman if I should sell it or is it too dangerous for mankind? If the scientist has to ask the question…

Then Lana got an idea, a Grinchy idea…

Nice touch at the bottom of page 4 where you can see the crater Lana leaves behind after falling out the window.

A teenage Lana would become the Insect Queen six years later and join Superboy in the Legion of Super-Heroes.

This was one of Lois’ better ideas, try to marry Clark. This route actually worked Post-Crisis where she fell in love with Clark, not Superman.

So Clark is out $3000 trying to teach Lois a lesson? At least he knows where to get a lump of coal.

Superman II was not the first time Lois tried to interview a bomb trying to figure out what made it tick.

I’m still not the biggest Golden Age / Silver Age Aquaman fan, but I am curious to see what’s available here in our library, especially the stories written in the early 1940s. Interesting about Robert Bernstein, I see he also came up with General Zod and The Phantom Zone in Adventure Comics #283.

I think Lana looks pretty attractive like that. In fact, I have a giant Lois Lane comic that does reprint the story.

Lois Lane Annual #2 only had the cover of Lois Lane #12. It might be a foreign reprint.

Here they are, front and back. 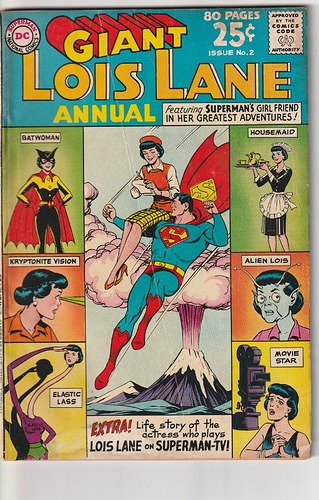 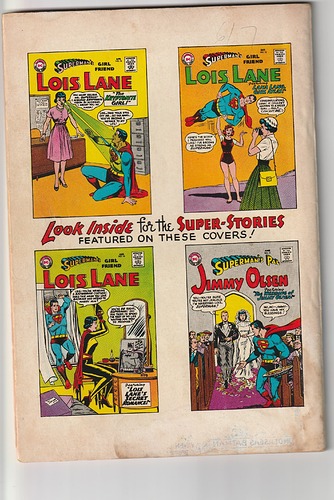