Challenge of the Superfans Season 2 Week 2

Welcome to Week 2 of Season 2 of a very special challenge / contest, reading one single issue a week from the currently- digitized DC Universe Infinite collection of Silver and Bronze Age Superman and Family comic over a three month timeframe! You don’t have to be named “Rip Hunter” to succeed, but it can’t hurt either!

This time around: BRONZE AGE! 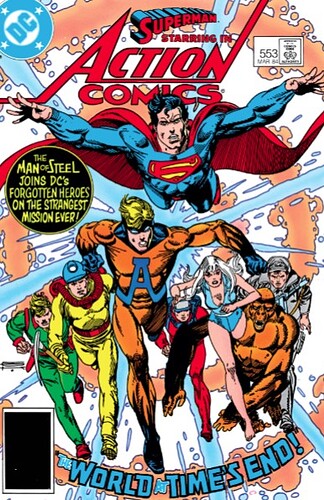 We continue reading the story from last week! The Man of Steel joins with The Forgotten Heroes (Rip Hunter, Time Master! Cave Carson! Congorilla! Suicide Squad! Animal Man! Immortal Man! Sea Devils! Dolphin!) to go back in time to stop villainous Vandal Savage from harnessing the powers of creation itself!

The standings so far for Season 2 of…THE CHALLENGE OF THE SUPER-FANS!!!

What an epic, sweeping story through time and space!!!

First of all, watch Wargames if you haven’t already. We could use our phones to get on the internet in 1983.

The Forgotten Heroes help save the day in the old split the team up fashion. Even back in 1984 you were reading heroes of a bygone age. Superheroes had completely taken over and the other genres, including even adventure, had just slowly disappeared.

Vandal needs to try plans that don’t involve time travel. It didn’t work against the JSA and it didn’t go well here either.

Superman ceases to exist? You must read the next issue!

And you should, #554 is a classic. One of Marv’s best Superman stories.

We will be sure to include the next issue I’m not sure it’s going to be next week though.

I goofed up and voted I read this when I’ve only skimmed it I’ll go back and read more later.

This was a fun story. Makes me nostalgic for the Bronze Age.

It was a much more light-hearted era for sure, agreed.

If the Bronze Age was more light-hearted, how would you define the Silver Age?

You sold me! This was a truly epic story, almost movie worthy.

Oh no, is Superman dead, is this the famous Superman Death Storyline, I have heard so much about?