[Superman Fan Club] Presents: Challenge of the Super Fans, an Issue a Week of Superman Silver or Bronze Age: Week 13

Challenge of the Superfans WEEK 13!!!

Welcome to Week 13 of a very special challenge / contest reading one single issue a week from the currently- digitized DC Universe Infinite collection of Silver and Bronze Age Superman and Family comic!

This time around: BRONZE AGE! 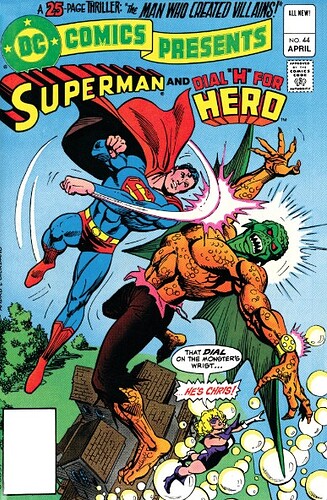 Before this issue, the Dial H for HERO comic was the lead feature in Adventure Comics. That got changed to a digest reprint format. After this issue, the feature moves to the backup in New Adventures of Superboy.

Making Clark Kent a tv network news anchor still irks me to this day. We do get a chance to see Perry get one up on Morgan Edge, so that’s a positive.

You just know if you type H-O-R-R-O-R on that thing it’s not going to turn out well.

The Master subplot will be running for a while longer. There’s a reason he knows so much about these dials. He sends a flawed clone into a disintegrator pit. There’s a few more clones he needs to send in there while it’s convenient.

Jimmy looks like he’s picked up a few tricks hanging out with Batman and Robin often.

Neat little trick of sending Superman off to handle a natural disaster to give the other heroes the chance to save the day. It suits the purpose of the book, to get you to look at other DC properties.

Well, it was great seeing the Dial H gang get some love and Superman treat them as Heroes and not kids.

Thanks @RexRebel and @CaptainYesterday for stopping by this weekend, and also reading each of the 13 weeks in this first part of the challenge!

Who else wants to stop by this week as well as perhaps catch up on some you may have missed the past 13 weeks? It’s been a fun way to spend a unique winter and endure the omicron this year!

I half expected The Master to fall into the disintegrator pit a la James Bond by the end of the story. And didn’t this story (entertaining as it was) feel almost like a backdoor pilot?

That would be interesting if this was all to prep for this to be in the back of the Superboy comic.

Congratulations @patterson65.37405 ! You also have successfully navigated all 13 weeks of this edition of Challenge of the Super Fans!!!

“Who is The Master” is the big overarcing plot of Dial H, so he wasn’t going to die. I’m not sure it is in the digital edition, but in the physical edition there is an ad to tell you that the story continues in Superboy.

I sent a note on preferred days / times for upcoming radio show Listen Alongs and just noticed you aren’t on the message group.

I personally would prefer an eight o’clock start time. Wednesday or Thursday would be fine (Eastern time of course).

Thanks, I’ll mix your vote in now!

Read this comic a dozen times at least, probably more like 2 dozen but was happy for an excuse to read it again. It’s one of my favorite comics from my childhood.

I really loved the idea of that version of Dial H For Hero. Chris and VIcki at least to my kid mind felt relatable, and relatively fleshed out for the time.

Especially given that in their original book and I believe all the Superboy stories they rarely did a full length story due to wanting to fit in as many heroes and villains submissions as possible. Even in the Superboy backup while they had some multi part stories most never were a full 22-25 pages. This is one of the few “full lenght” tales featuring Chris and Vicki.) and I loved the idea of kids like me being able to create heroes.

Interesting memory I have of those hero submissions. I bought an issue of their run in Adventure in the back issue bins, and whoever owned it before (from another state) had filled out the submission form but I guess never sent it in with a hero. In it (I assume to get info on what their readers interest was) it asked questions like favorite TV show, Favorite Movie, interest, etc. So it was an interesting look into what a 14 year old kids interest of the time were. I am sad I sold it even if the writing in it made it mostly worthless, it was still cool. Sad I sold most of my collection back in the day but that is a whole other story.

This issue served as a bridge from their short run as the feature in Adventure Comics to a backup in Superboy where they spent most of that titles run as backup features.

Interesting tidbit, and I am going off stuff I read a LONG time ago so feel free to take it with a grain of salt as I checked and can’t find conformation now. But I remember in the letter colums of Adventure Comics when Dial H was the star of the title, as well as during their run in Superboy occasionally mentioned an animated series of Dial H For Hero in development (although think they called it a cartoon… it was the 80’s), which was going to like the book have viewers send in ideas for the heroes and villains featured in the cartoon.

Apparently part of the reason they had such a long backup run in Superboy, despite not being especially popular, is because while the animated series was in devlopment they wanted to keep the Dial H For Hero characters going in comic form somewhere to generate interest and not let them be forgotten. But when the series eventually fell through, I would assume at least in part due to the turnaround of animation making using reader submissions incredibly hard to do, then they finally pulled the plug on their Superboy backup feature.

They also did a sort followup in Teen Titans that told what ever happened to Chris and Vivki who at that point had not been seen in comics for years. Forget the issues but if anyone can track them down (think they are on DCUI) they are a good read.

But sorry got caught up talking about Dial H (love them and never get a chance to do that) but my thoughts on the book. I liked it, the heroes were creative and them showing Chris experiment with the dial was a fresh idea at least for this team of H dialers.

It was not a very complex story but it served the purpose of generating interest in Dial H For Hero so readers would hopefully go to Superboy. I remember this issue was my introducetion to Dial H For Hero and I have loved it in all it’s incarnations since. Was also a fun story as a fan because this was the only time, at least during their initial run, that Chris and VIcki really got to be part of the bigger DC UNiverse. Other than a 1 panel appearance of the JLA in an issue (the energy fiend Clark referenced) and one of their villains being a former Joker henchman they never really interacted with the rest of the DC Universe or got to share the pannel with other heroes and DC Characters save this issue.

Thanks for the nostalgia. I really enjoyed getting to read this one again.

I’m glad you decided to share your thoughts on this
@DanTheManOne1 , lots to research here in your reflections, this is great.

Thanks also for joining in on the Challenge, I’m probably going to do this another 13 weeks soon.

I definitely selected this one based on the conversation we all had the last time Dial H came up in the readings with Superboy.

I seem to recall that appearance of Dial H for Heroes is a bit of a bummer later in Titans in the late 90s.

Question: What series features a boy finding a device that allows him to change into various superpowered forms, and deciding to use it to become a superhero? If you answered Ben 10, well, you'd be right. But decades before that show premiered, …

Not exactly on topic, but although I did buy all the issues when they came out, I just finished reading all of them on DCUI, and have to say Superman Red & Blue are some of the best Superman stories I have read in awhile.

Ok, Super Fans, we’re going to pause things at the 13 week mark, see if anyone else wants to catch up on things, and then relaunch for the next 13 week challenge next week is the plan!

@clucktrent @Bar-El stop on by if you can!

I actually found them after typing this. Their Teen Titans appearance was in The New Titans #45 and 46.

Chris King made a few small appearances in Titans comics after that, but his as far as I can remember and find only truly significant appearance as in Hawk and Dove Annual #1 (From the 1989-91 series) which is also on DC Universe Infinite.

Vicky had a bit bigger presence after that Titans storyline with them, all be it only by comparison to Chris.

Also there was a series called Superboy and the Ravers (which sadly is not on DCUI or I think available anywhere short of hunting down the back issues) which had member of the team named Hero Cruz who early in the book got hold of Viki’s H Dial and used it throughout the series run. Vicki appeared in issues 13 and 15 which finally gives her a happy ending.

Interestingly enough she appeared one last time in Wonder Woman 175 (from the series that started in 1987) in an issue that crammed as many female heroines and villainesses as they could cram in there. But she was seemingly a villain in that one and had her Dial (or at least was able to change) in it. Guessing that is a continuity error but it was cool they remembered to include her.

Thanks I just went over to take a peek at New Titans #45, what a sad tragic story.

How to go check the Hawk and Dove Annual!

Bless you, I’m so far behind it was getting a little daunting

And I’m loving these stories so I want to catch up, we’re just not hitting our normal workload stride for some reason this year and it’s been so crazy! 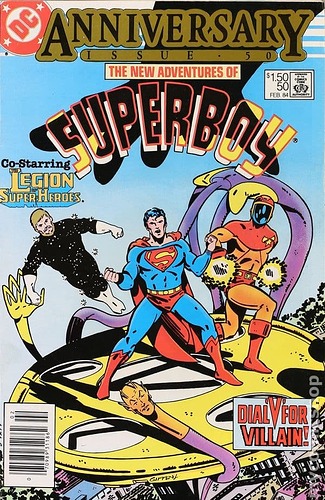 NOT on DCUI though

Well the good news is, we press the reset button and start all new next week with the next 13 weeks.

I actually bought this issue #50 several months ago because I was so interested in reading the story.

So far it’s my favorite issue of The New Adventures of Superboy.