[Superman Fan Club] Presents: An Issue a Week of THE SECRET SOCIETY OF SUPER-VILLAINS, Week 1

[Superman Fan Club] Presents: An Issue a Week of Superman and Family (and Villains lol) Bronze Age, featuring THE SECRET SOCIETY OF SUPER-VILLAINS, issues #1-14 over the next three months weekly!!!

Welcome to Week 1 of a very special challenge / contest , reading one single issue a week from the currently- digitized DC Universe Infinite collection of Bronze Age Superman and Family comic over a three month timeframe!

This time around: Bronze Age! THE SECRET SOCIETY OF SUPER-VILLAINS #1-12, starting with the history-making issue #1 by Gerry Conway at his finest and artist Pablo Marcos, who is also tearing it up for this series’ start! 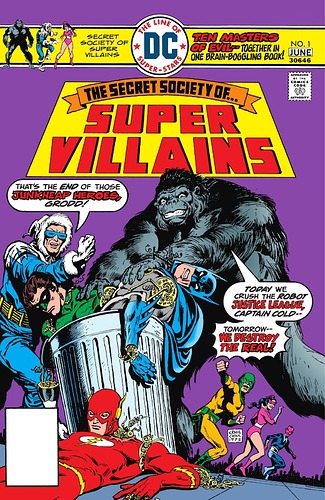 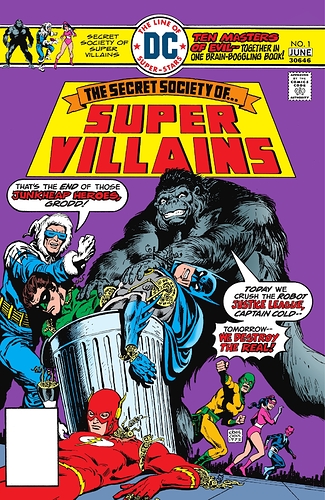 The Secret Society of Super-Villains #1

VILLAINS UNITE! Tired of their endless losses to the Justice League, a new cabal of evildoers-including Star Sapphire, Captain Cold, and Sinestro-has risen...

Did you read THE SECRET SOCIETY OF SUPER-VILLAINS #1 ?

And be sure keep an eye out for our once a month first Thursday evening of the month Listen A Longs of the classic 1940’s Superman Radio Show adventures (in the Watchalong aisle). The one for September is actually occurring Thursday September 8th to celebrate the beginning of back to work / school fun!

This was my first time reading the comic.

Please sign me up for this! Here are my answers.

(Disclaimer: I am highly biased toward bronze-age comic books.)

No worries, the real Superman (and Lex Luthor) will show up in future issues!!

It’s funny, @benivel.52844 , even though I actually own the comic books for this and read this years ago, I was fooled as well by the fights at first!

Gets set for a wild ride of writer and artist changes and more changes of direction than Impulse at a buffet!

NOTE: The Sinister Citadel is now the global headquarters of Amazon.

Thanks for stopping by, @CaptainYesterday !

Yep this series is a real blizzard of talent and story lines. My favorite artist on all this is Rich Buckler (R.I.P.). He had just recently blown my mind with his version of Deathlok over at the competitors’ aisle.

All this reminds me, every week I plan to post photos of various articles and letters pages from the original comics from my humble collection.

Some favorite panels that I don’t think are too spoily: 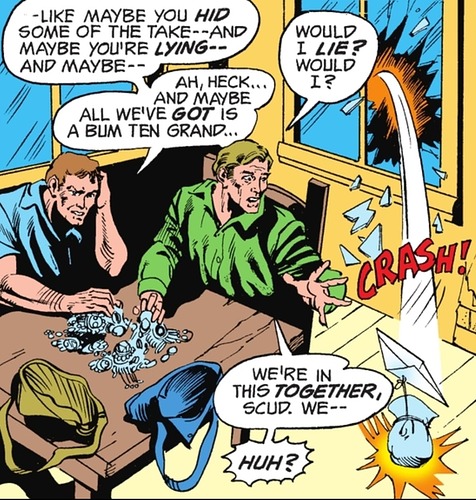 Feel free to send me an invitation, but please don’t throw it through my window! 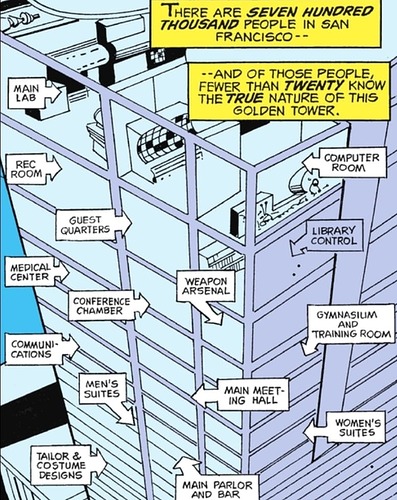 Raise your hand if you love secret hq diagrams lol… 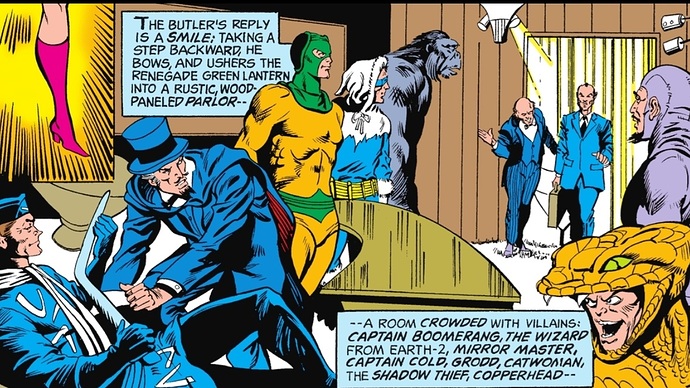 The expression on Copperhead’s face: priceless! 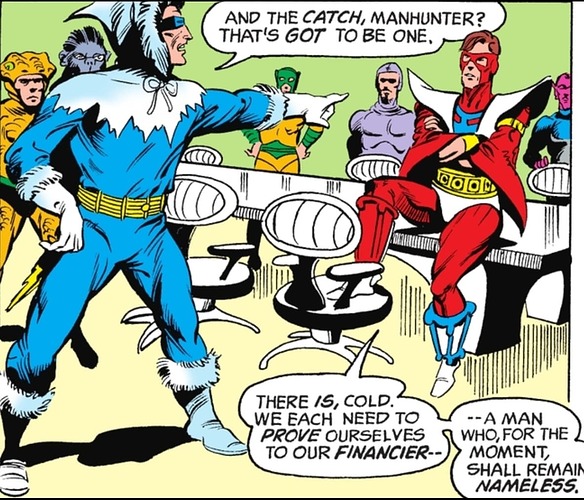 This concept has been done of course over and over in the decades since, so to many here this probably doesn’t seem too terribly original… but at the time it was very original. The closest I remember back then was the Super Villain Team Up featuring Submariner and Dr. Doom over at Marvel.

Any other Bronze Age DC fans out there?

I think I got so into the story I forgot about that cover showing the robots. 'Doh!

I mean, I actually read this many decades ago, saw the cover again now, and yet, when I was reading the actual pages, for a moment anyway, absolutely got fooled…too funny.

And now, as we wait to see if anyone else wants to read this first issue of the ground-breaking Secret Society of Super Villains circa 1976, published during the Bicentennial celebration in the U.S.A., as I said I would try to do, here are some screenshots from my copies of these comics of info pages (there will be letter pages to show in later issues) and some of the more intriguing advertisement pages from issue #1. 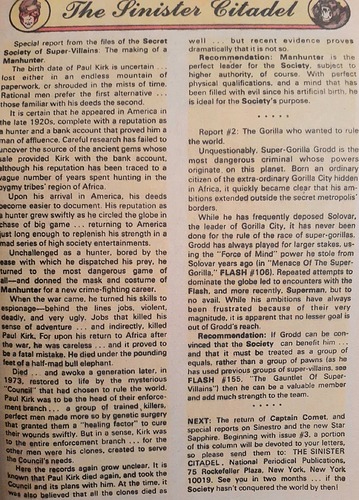 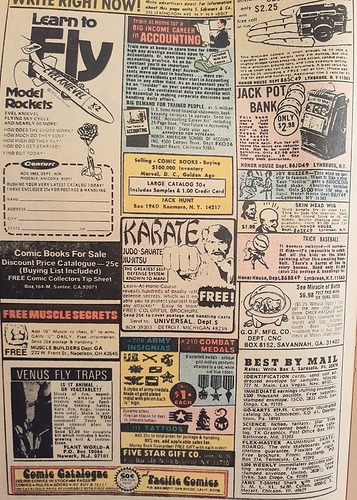 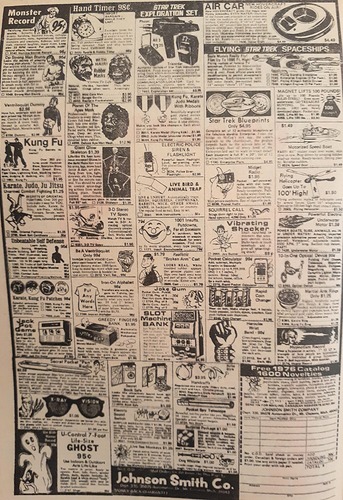 Any last thoughts on the reading or the letters pages above before we post the next issue tonight?

I’m late to reading this, but wanted to answer the questions anyway. For contest purposes, you don’t need to count this since I’m late (I’m not one for competitions, anyway).

Which villain featured in this series so far is your favorite to read about, and why?

I was going to say Captain Cold because he’s a great Flash rogue and I’ve always liked his costume, but it actually ended up being the evil Manhunter. I chose Manhunter because I was unfamiliar with Paul Kirk’s convoluted Bronze Age history, so running into him here got me to read up on it. Weird stuff!

Did you get fooled by the fights with Superman and pals?

Not for a second. Someone pointed out that it was spoiled on the cover, but I didn’t even notice that. However, it is a recurring Bronze Age schtick to have the team of super-villains “fight and defeat the heroes” as soon as they debut only to have the heroes actually be robots or illusions or something. Because of this, as soon as the heroes burst through the wall, I was like, “that’s not the real Justice League…”

Ehhhh… generously, I’ll give it a 5. It’s not a bad set up issue for the rest of the story, but it is, primarily, a set up issue. It gets most of the players in place for the rest of the saga, but didn’t do too much beyond that. I liked Grodd double-crossing Copperhead at the end, but even that kind of got spoiled for me when Manhunter told Grodd they’d take care of it. Wasn’t the whole point of that mission for Grodd and Copperhead to prove themselves? Didn’t they fail the mission by losing the orb? Why is Grodd still there and why are they taking care of anything if he failed? Anyway, it was a fine set up, but, as a single issue, I’ve read better from Conway. I do look forward to seeing where it goes, though.

Edit:
Oh! Before I forget, where was Catwoman???

I saw this and thought, “Oh, cool, Selina is here.” But I didn’t see her once. Was this a mistake? Does she show up later? Guess I’ll find out.

Raise your hand if you love secret hq diagrams lol…

I also enjoyed this. It reminded me of when Marvel did them all the time in the 60’s (my favorite was Spider-Man’s because it was just his Aunt’s house). Of course, Conway did work extensively for Marvel prior to this…

It’s not exactly a contest, it’s more that it’s just fun to take attendance, shall we say, for the readings and people will be able to say “I did it” with a sense of endurance and hey they showed up. I recently changed my name to Don-el_52 because I actually read all 52 issues when @Jay_Kay posted a weekly thread for 52 weeks, one of the few to make it I believe LOL.

And if this was Marvel, you would have won a “no prize” for noticing the Catwoman indeed does not appear in these first issues or two.

And if this was Marvel, you would have won a “no prize” for noticing

I would have definitely been that guy back in the day…

I actually won one back in the late 60s early 70s supposedly from Stan.