[Superman Fan Club] and friends, behold! The second reading in September, in perhaps a prelude to a new Red Kryptonite Club……. we present to you : Superman Under a Red Sun, Supergirl with Red Kryptonite in Her Veins…AND MORE Silver / Bronze Age Madness / Fun!!! (and we again stop by to visit with Lois and Jimmy). 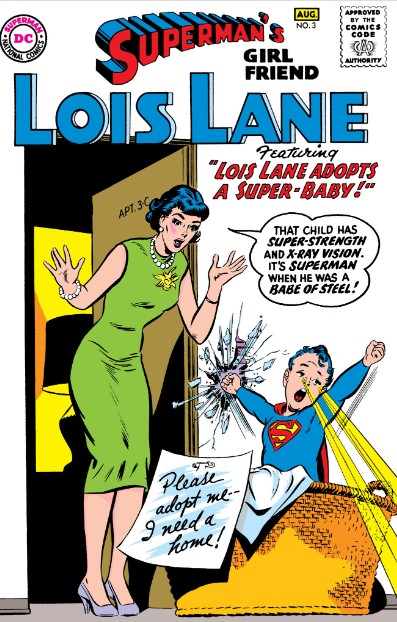 Click for Action #320 3 Super Enemies “THE THREE SUPER-ENEMIES!” Clark Kent summons Hercules, Samson and Atlas to help save Metropolis in an emergency when he is otherwise occupied but does not suspect that he has summoned the evil counterparts of these heroes from a parallel Earth. 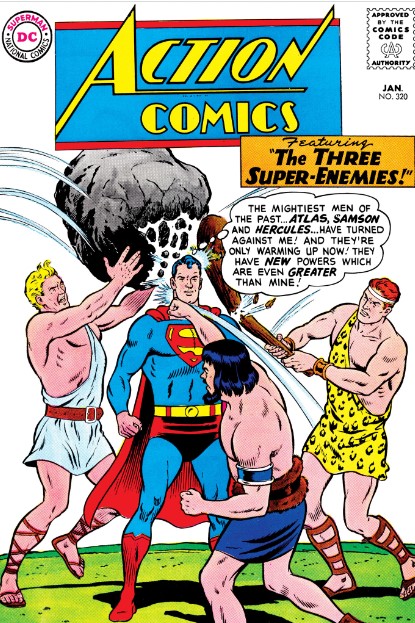 (The above look at all familiar, All-Star Superman fans???)

Click for Action #321 Superman: Weakest Man! “SUPERMAN–WEAKEST MAN IN THE WORLD!” Superman is stranded by super-villains on a red-sun world where he has no powers…but the inhabitants do! 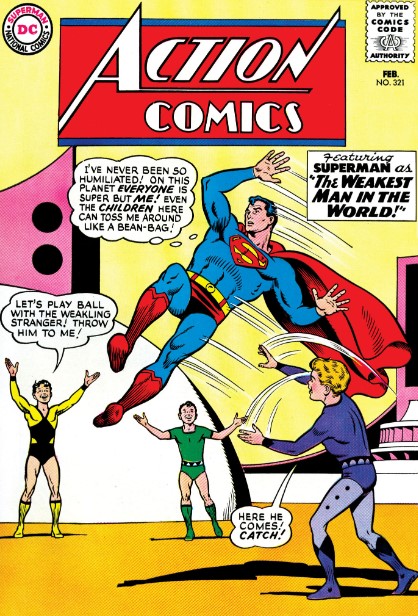 …Plus, “THE ENEMY SUPERGIRL!” Linda Danvers uses red Kryptonite to produce vulnerability in her arm so that she can donate blood. 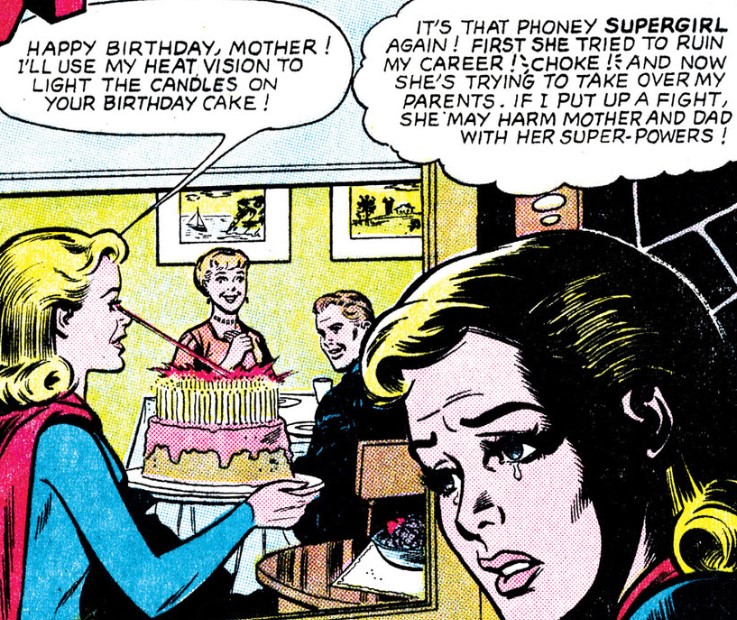 Superman (1939-) #257 (released October 1972) Click for Superman #257 War-Horn “SUPERMAN BATTLES THE WAR-HORN!” Superman faces a new alien menace who has come to Earth for the sole purpose of stealing all of its nitrogen!

SUPERMAN’S GIRL FRIEND LOIS LANE (1958-1973) #3 (released May 1958) Lois Lane 1958 #3 "THE RAINBOW SUPERMAN.” Superman smashes a crystalline meteor in space, but when he returns to Earth, he begins to glow with a rainbow aura, and for some reason it happens every time Lois opens her mirror locket.

Open Mic week: Let us know your thoughts below as well as sharing favorite art from these classics! 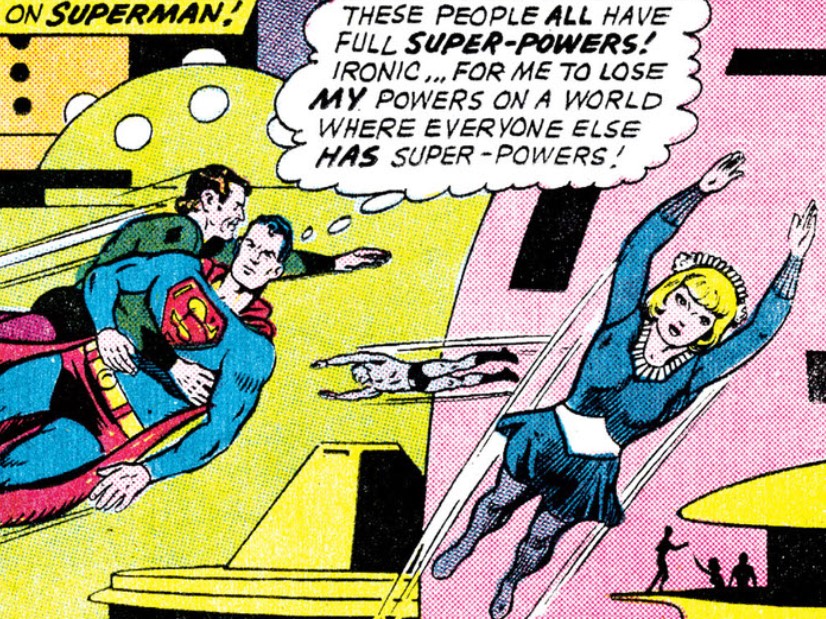 Another nice mix of stories.
To Supergirl backups first. While for whatever reason the last two college centered stories did not land well with me, I enjoyed these two even if as a guilty pleasure. The aliens programing an android to make Supergirl fall in love with him, was bad in a good way. Of course, she falls hard for handsomeness and ice skating. And, didn’t we know the android would truly love her in the end? He couldn’t help himself.
Those brats tossing Supes around his hilarious but this was a Supergirl-like story with the action actually centered around romance, with a nice twist ending. Poor Superman, dumped by his girlfriend and called a bonehead by Lois.
Still rallying enjoying the 1970s stories. War-horn isn’t as good as the Denny O’Neil stories but it’s a good solid story with the great Curt Swan so I’m happy.

Agreed concerning Superman #257 with the War Horn. I’m assuming that was Cary Bates writing. The concept of the War Horn “indirect” weapon was very powerful and really tossed our buddy Supes around several times in the issue.

It is also interesting to see the Green Lanterns and Guardians appear in the World of Krypton backup story, considering how the Guardians possibly play a role in Krypton exploding in the curent Superman run.

Now, about the drop in quality of the stories here compared to the Denny O’Neil Sand Superman epic we enjoyed earlier this year, I was reading an issue the other day that Mr. O’Neil composed soon after the dramatic I Ching ending and I gotta say, it wasn’t even close in quality sadly.

Still, I wish more of his early 70s run was available here.

As always, the 1950’s run of Superman’s Pal Jimmy Olsen (which started publication due to the Adventures of Superman TV show of the time) continues to be very entertaining even though it is around 66 years old like me;

The Boy Millionaire story is fun while soaked in the history/ culture of the time, and wry: 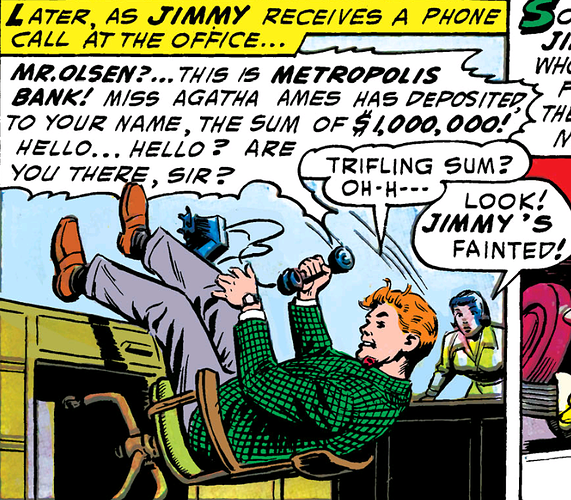 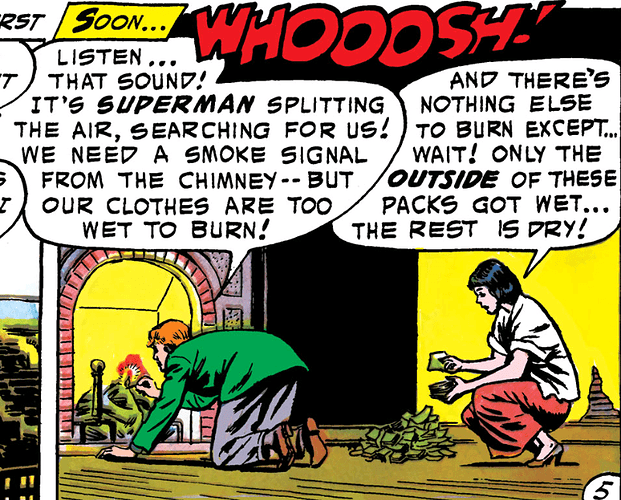 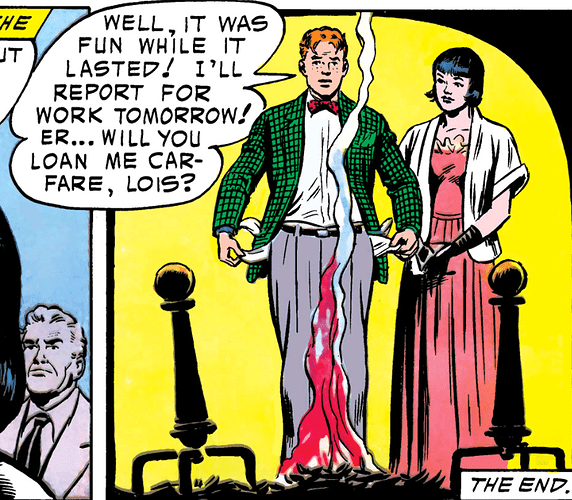 The 3rd story featuring someone setting off disasters to create their own scoops however is very very much with us today, as seen even recently.