Welcome to the community! Glad to hear you’re loving the show thus far.

Feel free to poke us if you have any questions about anything!

That ending twist with Sarah was too obvious.

I forgot how often ad breaks are watching a show live. 20 minutes in, 2 ad breaks already.

I called it last week! She met someone at camp! No wonder she was so awkward around Jordan when she wasn’t before!

Cryer was not menacing and calculating, I saw him in Crisis and all he made was jokes, he wasn’t menacing. They could cast Rosenbaum and blame it on Crisis, that’s what they’re doing with Lucy Lane.

This episode got me so angry! Why do this to Jordan and Sarah!!! They were so adorable in Season 1!

We’ll agree to disagree. I don’t think Rosenbaum would come back anyway.

They could cast Rosenbaum and blame it on Crisis, that’s what they’re doing with Lucy Lane.

Except Jenna Dewan is already confirmed to reprise her role as Lucy here, so Crisis didn’t lead to a recasting there like it did w/ Sam Lane or Morgan Edge. Granted, there’s a very good chance that Crisis will retcon her backstory, perhaps wiping out all of what we saw in season 1 of Supergirl, but it’s still not quite the same as the other situations

Besides, Rosenbaum couldn’t be Earth-Prime Lex since we already saw that Lex is still the same post-Crisis. Now if they really wanted to bring him back as the Lex of another world, that’d be a different story. But as far as this continuity goes, Cryer is still Lex (Supergirl spoilers: assuming he found a way to escape from the Phantom Zone, that is)

The kids adjusting to the new guest. And Nat at the school. She becoming friends with Sarah Nice. And Sarah says it all Jordan. Think he’ll push it down and focus on supering to deal with it

Lana is running for mayor. Saw that happening. Interesting and nice stuff there.

Lois and Steel trying to figure out the quakes. And Supes having The visions. Gets help from Tal and see his mom again. Nice only for a double cross. Jordan steps up and Supes is angry at him.

The beast hunts during the quakes and the connection is found.

What is the beast? What will happen with Jordan and Sarah. What the New Supes armies plan? All this and more Same

Does… does this comic series confirm Superman and Lois is actually on Earth-Prime?

Nope, Stargirl is in it too. 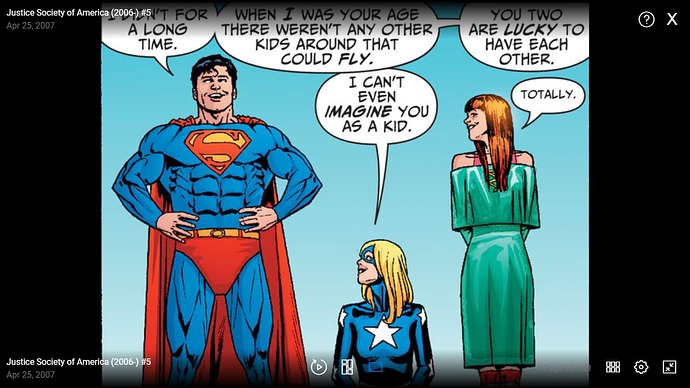 Yeah, but I think the show’s gotten at least a little better at showing that anyway. I know I’ve brought up issues w/ this before, but I think bringing Jenna Dewan’s Lucy Lane back was a good move toward actually feeling like a connected Arrowverse show. Although I’m still frustrated that we have yet to get a single mention of a certain Kryptonian cousin

This should be on TV, not comics.

It’s always been on Earth Prime, even though it is very confusing with no contact with other characters, but we had Diggle on.

This is also a Lucy changed by Crisis, so it won’t be the Lucy we knew back in Supergirl.

There’s a very good chance of that, but at least it’s still the same actor instead of another recast. And it’s also possible her original story could be kept intact. Like maybe she fell into this cult after season 1 of Supergirl. More than enough time has passed since then for it to have happened like that, though I recognize it’s not the likely outcome

I thought Diggle’s appearance confirmed that as well as the Kara photo on Lois’s desk (I think it was at least if I’m right).

I think it’s always been on earth prime they just keep there distance from the others to give this show time to do there own thing and most likely for pandemic reasons. But who knows maybe that was more of a S1 thing and they’ll mention more this season.

The trades are already bashing this season saying that the show fell victim to the CW curse (Which I think is a dumb thing to say).

So far, pretty solid. I will say that this show is kinda begging for a sister show and hopefully Naomi fills that with a crossover in the future.

I expected Lois to bring up her miscarriage to Natalie, but what she said to her was good enough.

I fear Jonathan may get into PEDs

Morgan Edge just wants to be loved and doesn’t know how to say or express it due to his fathers abuse. I remember last season the way he looked at Clark as Clark walked away from him saying that they were not family (Or something to that extent) actually made me a little sad.

I love how some trades are actively waiting to bash on the show…in their second episode, no less! Never mind the fact the show did well last season, has acclaim and did pretty well in the UK. I say let them have their negativity. It didn’t stop the show from getting a second season.

I agree about Edge. You can see it in his face whenever someone overlooks him for Kal.