I have received word of the cancellation of Supergirl #41 & #42 from my online comic supplier, What is the future of Supergirl in DC comics? Will she appear in other titles? Will she be revised/rebooted? Is a new series scheduled?

Nothing in the known solicitations for the coming months.

You can get some crumbs in Action Comics right now though. She is part of The House of Kent arc.

The last few issues of the current series are being released digital only. Not sure if those are out yet. Supergirl is also appearing in Action Comics at the moment.

Only a guess, but would think Supergirl is not a property to let sit too long without a series. Guessing/hoping we’ll get a new series in ‘21. Hopefully with a quality writer for a long stretch

Think it works both ways. If you’re a writer with name recognition and a relationship with DC, you can pitch your take. Or DC reaches out to writers to give it to them or ask them to pitch ideas.

The last few issues of the current series are being released digital only.

Got to say I know business is business, but I really think it was unfair to those collecting to have stopped some of their titles with only an issue or two remaining. I know DC is not basing their decisions on what the hardcore collectors who want to revel in what their longbox looks like, but is it really that impossible to have not released the last issue or two of something?

They are already available on digital in comixology, so they wouldn’t be exclusive but they’ll prolly be here after the 6 month embargo associated with DCU Infinite.

They will also be available on print in the trade.

DCUI has promised some kind of digital first exclusives, but as far as I know it hasn’t been revealed what those comics are yet.

Also, the term Digital First and exclusives are being used very liberally these days. The DC digital first that were released on comixology at the start of covid had already been released in print, so “digital first” there just meant old paper comics- first time on digital. So time will tell what that term means for DCUI.

I think we might get some of that – Jim Lee has talked about in recent interviews how while they might be condensing the amount of PRINT comics they publish, they want to expand and do more digital exclusive comics, especially of the characters who may not be able to fully support their own print comics, or do some weird experimental stuff with.

I would not be at all surprised if one of the exclusives we get with DCUI are some of the books that were cancelled, like Supergirl and Batgirl.

Thanks i love this community

Thank you! I purchase Action Comics and have #1024 available to me, although I haven’t started to read it yet.

Cancelled in comics, cancelled on television…
Things look dire for our heroine indeed! 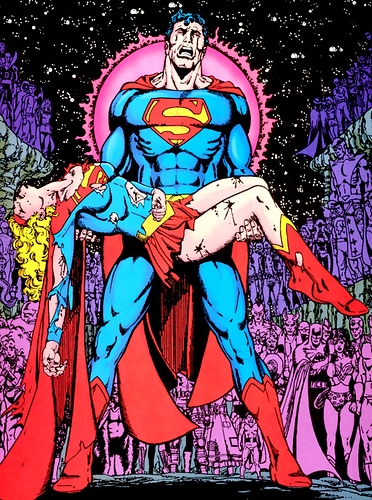 Okay! maybe not THAT dire!

Actually, an idea occurred to me. In Arrow, they killed off Deadshot/Floyyd Lawton because he was about to be featured in the Suicide Squad movie! Is it possible that Supergirl might be heading back to the Big Screen and they’re closing the TV show down because they don’t want to confuse the dim-witted general public with two interpretations? (If so, How is the Flash TV series still running?..Oh yeah, because the Flash TV show is actually good while the Flashpoint movie is having so much junk thrown onto it that it will never be able to stay afloat!