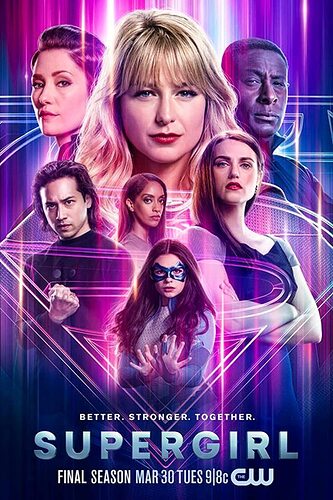 E8
It has returned.
The episode deal with the aftermath of the Phantom Zone saga.

Dreamer and Lena dealing with the vision and trauma from the zone. Look like Lena is taking a break from the show or is this he exit until the finale (if she be back for it)

Kara
showing the Dad around. Still living with the trauma of Krypton’s destruction. Sad. But understandable. Leading to a Fun return from Kelex and fight Oscar the Grouch

. He then leave with a nice speech and to spend time with his wife on Argo. Very sweet.
Also with the “We can save Krypton” line all I thought was “Krypton had its chance”

Brainy was fun. Insulting Kelex and I regret nothing

Kara still struggling with it. And nice moments with her and Alex. And taking inspiration from Iris cool.

Now they know Nxy is back.

I always enjoy your little summaries. They’re lighthearted, fun, and only work for those that have actually watched the episode

This episode felt like some of the 90s comics I’ve read. Outlandish concepts (garbage monster, matter to energy converting robot) backed by very thin explanations, in a somewhat goofy plot that still manages to have heart.

I always enjoy your little summaries. They’re lighthearted, fun, and only work for those that have actually watched the episode

Well it looks like the CW is following up Black Lightning’s utter lack of episode promos w/ the same route for Supergirl in the back half of its last season. The lack of care in actually advertising SG’s final episodes is just disrespectful and completely ridiculous like it was w/ BL. But the SG fanbase is notably bigger and more passionate online than BL’s, so the SG social media posts are gonna be completely flooded w/ replies and comments asking where the promos are, and for good reason

Kara still getting back into things. And helps save some wronged alone prisoners with Manhunter and Alex’s help. Cool story nice stuff with it. Then interviewed and helping Catco to too.

Dreamer figures given out her dreams. I think the owl may be her moms spirit in a way. And Nxy tricked just as she wanted.

Kelly getting some spotlight. Very nice moments with her and the kids. Now she’s finally suiting up as Gaurdian. Nice looking forward to that.

Can Kelly take the mantle? What Nxy’s plan? Will Supergirl and the team be able to stop it? All this and more Same

True why don’t they promote there final seasons more. They normally get more views being a final season. Just look at Arrow. Very strange.

Exactly! Both Arrow and Supernatural got plenty of promotion from the CW in their final seasons. But w/ Supergirl and Black Lightning, not showing teasers anymore gives the impression that the network is trying to bury them and just hurry them out the door. And considering those 2 shows don’t have a white male lead, it comes across as a pretty ugly double standard

Dreamer struck a deal. Cool moments with her mom. Learned some new things with her powers. And a new challenge fit her to overcome.

Supergirl dealing with the system. The PSA was hilarious

. And some nice stuff with her fighting for the people. Save the building but it’s all a trap to Nxy’s plan. Cool villain moment with her.

Then Mxy shows up. Interesting. Think he may be the dad

. But I do have a feeling he will die.

Can Kara beat Nxy? How will Mxy help? Will Kelly live up to the Gaurdian name? All this and more Same

Mxy is back and here to help. Learn more about his past with nxy. Interesting as old friends. His I will survive was hilarious

Then the team fights the giant cat. Cool fight there. Dreamer dealing with letting nxy go. Nice chats from the team. The the plan to try and trick nxy. At first was wondering why not have John shape shift to Mxy but she can probably sense that and it seems dreamers energy effects of imps so most likely her in disguise worked better.

Now Mxy it captured and so it nxy (kind of) but not really. And the search for the totems begins.

Can our heroes find the totems in time? Is Mxy truly lost? And what will nxy do next? All this and more Same

Mxy’s goes into the sphere with the power dampening bracelet. I am guessing he puts it on No Imp powers, Sphere is useless (or at least not as useful) - well for for finding the totems.

Holy crap, that was 1 of the best episodes the show’s ever had! They really stepped things up in a big way, and we have Azie Tesfai to thank so many times over for that. Between co-writing such a strong script and giving a phenomenal performance, this was just an amazing episode that left me in tears. It’s the kind of installment that really makes it even more upsetting that the show’s ending in the same season where Kelly is fully breaking out and finding her voice. She could’ve had several years’ worth of compelling material still in store, but as it is, we can still appreciate that we’re at least getting this much #GuardianisHere

Great story of how just everything. The difference in views and experiences and even in the superhero world the big names always focused on the big bad but forgetting the small but still big issues. Great speech and line form Kelly. MM had a nice chat with Alex too.

Guardian in action was great. Nice skill and the symbols that they are. The older brother (forgot name) may be running for office. Interesting

Lena returns and with the magic book. Wonder where that will go.

Dig’s back. Nice stuff form him too. His power talk definitely get me thinking lantern. And now he’s off. Interesting

What next for our team? Can the stop Nxy? Where is totem located? All this and more Same

The theme of courage.

The hunt for totems begin. The trials were going interesting. Some nice backstory for Nxy who faced her challenge. And Kara who couldn’t beat hers.

The effects were fun with overconfident Alex and Emotional sharing John

In the end the crisis is adverted but Nxy got the totem.

Can our heroes stop Nxy? What next for her hunt? Will Lena give in to her magic side? All this and more Same

The humanity totem. The world in chaos due to a lack it. Nxy gets overwhelmed with it humanity lead to our heroes getting it.

Leena dealing with her magical past and helping save the day. When Dreamer said Leena broke my brain gave me laugh

And the team gets reported on as the truth is finally exposed.

Also seems like Alex and Kelly may be adopting soon. Cool.

Can our heroes get the dream totem? Will Nxy get it first? Will the child get adopted? All this and more Same

The child learns more about her powers as Alex and Kelly deal with being new parents. Lot of nice moments there.

Nxy and Kara battle for hope. She stops a war and brings hope to people. Saves William and gets the totems. Destroys one and now Nxy has lost. Or so she thinks. Seems like Lex is back or at least helping.

Have our heroes win? What are the consequences of destroying Hope? What’s next for Nxy? All this and more Same

Things are getting interesting.

The team is in trouble. A nightmare is Lois and they make the tough call. The city is in chaos and so is Kara’s life.

Kara dealing with the interview and trying to help her life but it all sadly goes wrong. Leading to the quitting of Catco. Definitely a big move.

Dreamer on a quest against Nxy for the Totem. She reunites with her sister and some cool stuff from her. Great when she stood up to her sister. And a sweet end.

And Lex is back. Makes me think is next week the end.

What are Lex’s plan with Nxy? Can Supergirl and team defeat him and Nxy? Is this the end of the series? All this and more Same

It all about Love.

Lex is back. He seems to have escaped to the future and now back to the past for love. And with Nxy interesting.

While Kara and the crew deal with finding the rest of the totems.

Alex tries to propose. But Kelly had the same plan. A very sweet engagement. And now the kid is the totem. Interesting stuff.

William infiltrating them. Wonder where that will go. And Brainy stuck in time travel. Wonder if the legion will pop up​

What’s Lex and Nxy’s next move? What will the kid being a totem do to her? Will our be able to stop it in time? All this and more Same

The team is trying to stop it all. A lot of cool fights overall.

Alex and Kelly dealing with Esme who’s been totemed. Some issue between the Danvers sisters but nicely resolved.

Brainy has to leave. Very sad stuff between him and Dreamer but sweet too. Hope someone works out for them.

Lex’s love revealed. And then anger ensues. The truth totem is found and his partnership and relationship with Nxy.

William
getting screwed. Making Angela feel bad and now worse with that end.
Then that fatty or moment. Esme taken and William dead. Duh duh duh.

Can our heroes stop Nxy and Lex? Will anyone else die? How will it all end? All this and more on the exiting 2 hour conclusion. Same

Ok, I know I wasn’t active in this thread before but I just watched the finale and I have nowhere to talk about it.

I wasn’t sure how they were going to wrap up six seasons in two hours but they did a decent job with it. I didn’t see them bringing Lilian Luthor back just to kill her off. That was rough. But Lex and Nyx falling apart was bound to happen and I guess that was a good catalyst.

I really liked that the gauntlet for the love totem wasn’t the type of love everyone thinks of. But it was Nyx’s love to protect Esme from Lex. I really appreciate that. Them using the All-Stone to wipe humanity of their feelings was well done but then Lex with the Phantoms just felt like they were pressed for time and couldn’t figure a way out so they just flew them into the Phantom Zone. It was awkward. But it worked, I guess. A fitting end for Lex. Nyx might have deserved better.

I was nervous for another Arrowverse wedding but Barry and Iris weren’t there so it went well.

It was a fun one and I liked that everyone had a scene together.

And that big surprise guest star. Cat Grant! I really enjoy how she basically showed up as the ‘moral of the story’ for the end of the series. But it worked. It was the words and the voice that Kara needed to hear.

I knew something big had to happen at the end. I was hoping for an explanation as to why Kara wasn’t mentioned at all in Superman and Lois but this works too. And I like how much it mirrors Clark’s decision in the comic.

I know a bunch more happened but those are the big points I can think of right now. I know I missed a lot. But I liked it. It finished the series well. I wonder if this will impact any of the other series at all?