Just wondering what you guys thought. Personally, I liked the skirt better. The pants just make look like an ill fitting jumpsuit.

Yes, it’s bad. I could probably scour the entire internet for every Supergirl-costume wearing cosplayer and halloween-celebrator and not find a single suit that feels less like Supergirl than this one.

I don’t think they are going back to the previous one, Melissa feels done with it for multiple reasons. They’ve also sort of committed to leaving it with all the pants, pants, pants cheering.

Having said that, there are several examples of better full body designs for Kara. This just isn’t one of them.

They need to fix the color balance. Preferrably more red. But at least break up the suit better so it doesn’t look like a jumpsuit. It should look like a superhero suit. It might be as simple as adding a skirt, or even just a slight color shift like the pants in attached image (art by Michael Lunsford).

It’s going to be a rough season. The suit isn’t even bad cosplay good. It’s immersion breaking bad for me. It doesn’t feel like Supergirl, it feels like Melissa playing around in a jumpsuit. Hoping with time it gets less jarring. 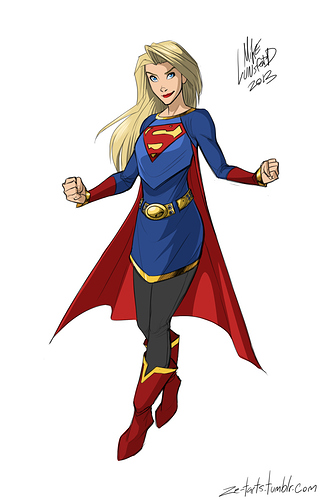 looks good, feels right, exactly what a twelfth-level intellect would presume is practical, protective, and pleasing to the wearer

I’m fine with it. I like Kara’s bangs too.

I’m cool with it, I think the change makes sense in story and I’m glad the actor doesn’t have to run around Vancouver in a skirt anymore (I’m sure the original costume was fine when the short filmed in L.A.).

I’m not a fan. I’ve always liked the way the skirt so totally changes the silhouette away from Superman’s. Also, since Kara does always seems to have this “I’m not really one of them” nagging doubt in her head. I think the skirt is a sense of trying to connect at some level through a sense of deliberate, overt and slightly overdone femininity. Essentially a psychological “crutch” if you will.

I’ve always found Kara’s hair (be it short or long) to be an element that distances her silhouette from Superman.

If you see the silhouette of a caped individual with long hair (or short enough hair that it still blows around when its windy) hovering over you, it’s definitely not Clark.

It could be Mr. Majestic though.

@Vroom Did you forget his mullet? 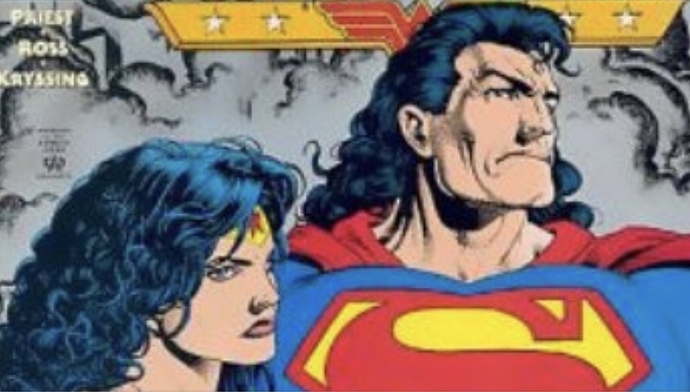 I shall never forget his mullet. Nevah!

It’s still distinctly different than any hairstyle of any Supergirl though.

I still have yet to watch the season 4 premiere but from what I’ve seen of the new suit I’m not a fan of the sea of blue or the boots. I think some red could have been add in the hip area to break up the blue. If I’m not mistaken there are already panels in the hip area that could have been red .Out side of those things I want to see the suit in action before commenting further.

Personally, I like the change-up. I think one of the fun parts of watching an ongoing series is seeing changes to the characters. One of the best ways to do this for a hero is with a cool new suit. Seeing Supergirl in pants is definitely new, but in a way that makes her visually distinct and easy to pinpoint this season’s Supergirl, as opposed to ones we’ve seen before.

I’m also glad to hear that it was designed with Melissa’s comfort in mind.

I dug the new suit. It seems like Kara won’t have to wear it under her clothes now.