They recently posted this: 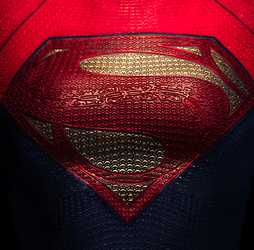 Reminiscent of Kara’s costume in Crisis on Infinite Earths.

It’s hard to tell much from the limited crop but I think I like it.

I think the strong red color could bring out some much needed oomph to the washed out colors of the crest.

I think it looks awesome! Can’t wait to see a full shot of the costume!

I think this will be one of the best DC movies! I love a multiverse and a crisis!

I like it! I wonder if she’s going to wear pants or have the skirt? I don’t really have a preference, but this look has me excited.

Looks great. This seems like it’s going to be a crazy movie.

I dig it! Also see a bit of her Crisis look in here, that’s definitely a solid costume to start with – though hopefully without the headband.

Also, I can’t help but notice that she’s wearing the same \S/ shield that Cavill does in the movies…

though hopefully without the headband

I never did like the headband, but honestly - if they bring the headband in I’m here for it

I like it! I wonder if she’s going to wear pants or have the skirt?

Skirt over pants. It’s all the rage, I hear.

As happy as I am for Supergirl fans, I can’t help but feel bad for The Flash. He can’t even have a movie for himself without a bunch of guests showing up.

In my heart I would have preferred Kara introduced in her own movie too, but I’ll take what I can get.

Flash and Supergirl fans share a lot of the same pains and joys. They have been apart but also share the same history.

As happy as I am for Supergirl fans, I can’t help but feel bad for The Flash. He can’t even have a movie for himself without a bunch of guests showing up.

I think Flash is best when he’s reacting to other heroes … especially Ezra Miller’s version. It would have been nice to have him tool around with some local rogues before going full Flashpoint, but I’m hoping we get some taste of that in the movie still. I think from a Hollywood perspective, they’ve already raised the stakes too high to make a “city protector” Flash feel like a full story with any heft.

I’d love to see Melissa and Gustin together on the big screen, but I fear that they won’t assume that everyone saw CW crisis the same way that they assume that old Batmen can be put into the movie and people know who they are.

But when big-screen Barry met small-screen Barry, that was a huge deal, obviously. I feel like we need to follow that up from the other side.

People don’t need to know who they are. Just “another Flash,” “another Supergirl,” or “another Batman” in the context of the story they are telling. For those who recognize them, cool bonus implications, but for those who don’t, it should still work.

Exactly. The point of the movie, seems to me, will be exploring the multiverse. During last year’s FanDome, multiverse was the buzz word of the con. And DC is going all in on the concept that all DC media that’s ever been or ever will be is part of the same giant multiverse. For us silly nerds it makes total sense, but the regs are catching on, too. The MCU has already started on this path, though I don’t think they will be taking it quite as far as DC seems to be.

hopefully without the headband.

dude how funny would it be if they were attended a musical with them in it or just have a billboard poster with the two of them for a play or something LOL.

Ooh, thanx for sharing this @Coville!