The latest solicitations for the Supergirl comic shows that it is ending with issue 42.

What are your thoughts on the series?

Personally I quite liked it at the beginning. The stories by Steve Orlando and the quirkiness of Brian Ching’s art made it stand out from other Supergirl books. I was never a big fan of the Zor-El Cyborg Superman but aside from that I quite enjoyed it.

Robson Rocha did a good job as well, but despite the fact that I would usually have hated art like Ching’s, I have to say I missed him when he left. The Jamal Campbell art in issue 20 was delightful and I’ve always loved Kevin Maguire’s art.

When Orlando left and the book was taken over by Marc Andreyko it got a much closer connection to what was happening in Superman. It still managed to keep its own tone and I think we got some interesting stories, but I’m not sure this was the right direction for the book. It lost some of the innocence that the Orlando issues had and tying the book that much into various crossovers and such made it a less accessible book for any fans of the tv show that might have been interested to try out the comic.

To me though, the Infected storyline was what completely killed the book. Sure, it could have been an interesting look into a darker Supergirl but that has not only been done way too many times, this time it also dragged on for way too long.

I’m hoping we’ll get to see another take on the character soon and that it won’t be years before the next series.

Anyway, what are your thoughts on the series. 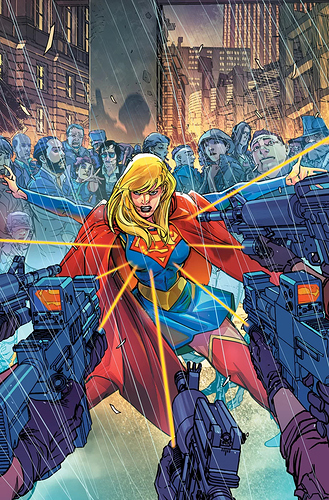 I agree much with what you are saying.

My thoughts on the Orlando run: In broad strokes - a great run. He writes a good Kara, has done the homework and treats us with some deep cuts. He sets up a great supporting cast with family and friends. It’s inspired by the show, but he does one thing so much better. The show is turning all her supporting cast into heroes and sucking the air out of the room for Kara. Orlando’s supporting cast lifts her instead. If there is one big complaint I have it’s that he wasted his final time on an ad for his next book instead of leaving on a high note.

Andreyko’s run is… where it starts to get problematic. The start of his space saga is good, but we see the first hints of Kara breaking character as her motivations are leaning a bit towards vengeance for Krypton. She gets a nice setup digging around in the green lantern archives and finding a mystery to follow. But then the writing starts to plummet. There is no rhyme or reason for her travels after that. She just randomly ends up where she needs to be. The writing is pretty bad. We lose more of Kara as she turns to spitting her adversary in the face.

Then as the end of the unity event comes, it is just downright bad. All the pieces are just given to her, the Axe starts pulling her into a intergalactic space war that suddenly exists. It’s like someone at DC said: “Just end this”. We notice that there seems to be no coordination between Bendis and Andreyko as Rogol Zaar gets different origin stories on the two books. Thus, ultimately Supergirl’s grand quest for truth ends with nothing.

Another space army wins the fight. When we come to what should be one of the most important moments of her saga and the killers of Krypton are caught - she just stands in the background. She doesn’t even get a conclusion or reason for Jor-El murdering her father. They just leave her as an ornament as Bendis starts his Legion and King Superman saga.

Then torn out of the event that left her in the cold, she is thrown into the next Bendis event. She has nothing in the Leviathan event to do. They just use it to deconstruct all the good things that Orlando built and make her title darker.

After that, thrown into the Lex gift event… also she has nothing to do in that event… then finally the complete destruction of the character as she gets infected and throws around kids in a bus and resorts to using her heat vision for murder.

When they decided to end this title, the events and grimdark garbage had already rolled her title in the dirt and used Kara to prop up male stories for so long that the Supergirl fan communities had already started calling for her cancellation themselves.

I have looked around at the aftermath among fan sites and social media, and while there are people sad to see it go. Many had already left, was leaving, and even called it a mercy killing of the title.

If I am to give my thoughts. I think the Supergirl title had been in constant decline since Orlando and the last months there was no Supergirl comic at all. There was only a comic with her name.

Supergirl doesn’t die with issue 42.
She died with Rebirth a long time ago.

For me, the Orlando run was okay at best, a bit meandering and pointless but I liked it. Andreyko’s space run I loved. Kara had a point and a mission. Yes, she was upset and angry, but in the end she pulls through and acts like Supergirl. But now, I really cannot stand what’s going on in the book, and with the current issue they doubled down to make it worse. I can only assume a new title will start, just hope they do it right.

I think that if Andreyko would have had full control of her space quest, I might have loved it, but I suspect something rushed it. It felt rushed at least. The foundation for an important great Kara story was there. The execution was lacking in my mind.

I also wonder if Andreyko didn’t have the mandate to build Krypton lore. So much time spent on the chase, and then she doesn’t get to pluck Rogol for a trove of lore building details.

While in not caught up with the latest, I think there is something about SG that lends itself to shorter runs. Look at many of her earlier books. The entire arc of infected just didn’t do many any favors. She is someone who looks for and builds relationships, it’s kinda her thing. I’d rather her see here as a leader, especially a tactical in LOHS, she a better fit there as a general run. Especially if they took a page from Superman/Batman Apocalypse, where she gets a lot of Amazon training and picks up some of Batman’s tactical skills. It would really set her apart from Superman. I hope she lands there. Might need to retcon some of her earlier post-earth origins. Plus she and Brainy are one of my true DC OTPs.

Use PG as the other current time continuity for a “super”.

Jumping in here because Kara is life

I stopped reading the title after she met up with the omega men. I’m not sure why but I just fell off. I kept buying them though…is it worth seeing through to the end? She’s my favorite character

One of the interesting things about Andreyko’s run is that the first, like, 4 or 5 issues or so are SO PROMISING. It’s such an exciting treatment of the character. Then they get into this thing with some scummy Coluan boyfriend and this crystal nobody bad guy who’s allegedly so important and it just loses its way and never really gets back to that promise.

I couldn’t agree more. I can’t but help wonder if the event coordination forced him off track.

The book never recovered after that. It was just in an out of control downward quality spiral. There was one our two decent issues after that in Andreyko’s run, and the annual had some lovely moments.

Houser never had a chance from the start as she had to write a Supergirl book that didn’t have Supergirl in it. Selling a Joker book to Supergirl fans is a bit like serving only meat at a vegetarian convention. You will find a few that are open to meat but you have to watch the others complain and leave.

As someone who enjoyed Andreyko’s run, I couldn’t agree more with both criticisms. As much as I liked it, it could have been so much more.

I always liked David’s run the best. I liked that the character wasn’t Kryptonian too. It made Superman unique. Again.

And Eradicator. Kinda. And Conner. Kinda.

I never understood the lure in Superman being the sole surviving Kryptonian. Zod is arguably the best villain or one of the best. The surviving Kryptonians gave lore and life and created an interesting kryptonian mythos. Supergirl and Krypto and Powergirl and Kara In-Ze are some of the most popular heroes in DC:s lineup responsible for many of its best moments.

Trading all that for the concept of “sole survivor” is just foreign to me.

Superman would be reduced to a fraction of who he is without those survivors. He would be a very strong man without history and lore.

The whole infected storyline really killed the book. I don’t understand the appeal of turning Kara dark/evil. I didn’t like it with the whole Red Lantern thing and it didn’t sit well here. Maybe I was getting Mary Marvel vibes when they kept doing that to her before the New 52. It’s a shame because I was really digging the early Rebirth Supergirl stories. To this day Sterling Gates has been my favorite Supergirl writer. There was someone who knew how to do tie-in stuff while getting his own stories in!