One of my favorite things about superhero comics is that there is so much history, so much continuity that I’ll never know everything. There will always be mysteries to uncover and unanswered questions from the past. When one of those questions is answered, there is this feeling of closure that is difficult to replicate in any other context. Today, I answered a question from my comic book past and wish to share it with you all.

Back in late 1994, DC put out a little event comic called Zero Hour. In the middle of Zero Hour #2, this little interaction between Superboy and Anima takes place in the midst of the time crisis: 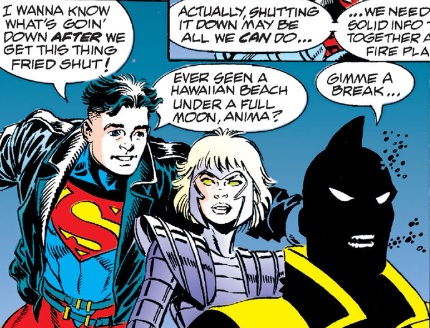 First off, taking time to hit on a girl in the middle of a potential extinction-level event is not the classiest thing Conner has ever done. However, it’s also not even close to the sleaziest thing he did/said in the 90’s, so I’m moving past it. When I read this scene as a kid, I was intrigued by the Superboy/Anima pairing and wondered if/how it would play out. I wasn’t sure it ever really did… until today when I found this in my LCS’ dollar bin: 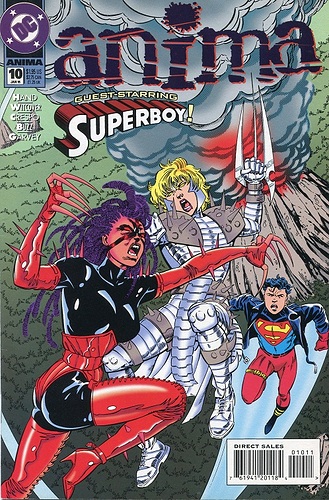 Before I go into the plot of Anima #10 from January of 1995, let me give you some background on Anima as she is not the most well-known character in the DC Universe. Anima’s real name is Courtney Mason and she first appeared in New Titans Annual #9. She is one of the “New Blood” superheroes who was given powers after being attacked by the parasitic aliens of DC’s Bloodlines event in 1993. The attack basically connected Courtney to a spirit-being known as Animus who, roughly, represented human motivation (and a bit of aggression). Animus and his siblings reside in a higher dimensional place called The Arkana which Courtney becomes a gateway to and wackiness ensues.

Anima became on of the few “New Bloods” to get their own monthly title. Unfortunately, it ended up not being the most popular title which makes it difficult to read all of to this very day. Currently, there are only two issues of Anima that are digitized (the Zero Hour tie-ins) and physical copies are even difficult to track down since the book wasn’t ordered in droves by your LCS. I think that’s too bad because, with what little I have read, Anima seems like Sandman-lite. It has some deep spiritual and tarot connections. It was also pretty hip as it steeped itself in 90’s alt-rock culture. Maybe it will go down as a cult-classic someday?

Anyway, on to Superboy and Anima’s “date” (and apologies as Anima’s limited availability means I’m reverse-engineering some of the plot points, so I may get some things a bit wrong). As we enter the plot of Anima #10, we appear to be joining Anima as she returns to Earth and receives an unpleasant greeting from Superboy in Hawaii. Conner is under the impression that Anima disappeared during the Zero Hour event and never returned. 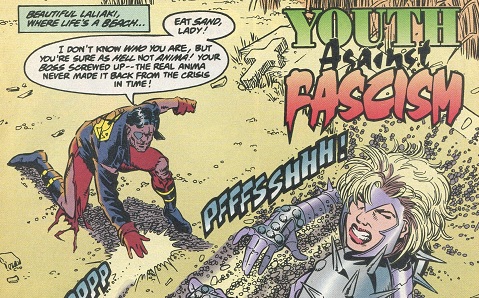 Eventually, Conner is convinced of Anima’s identity after she brings up his lame attempt to ask her out in Zero Hour #2. Throughout the issue, there’s a tarot reading going on that comments on aspects of the plot. At this stage, Superboy and Anima are intriguingly represented by the Two of Cups. The Two of Cups suggests some sort of positive interaction or partnership, but… it can mean romantic… 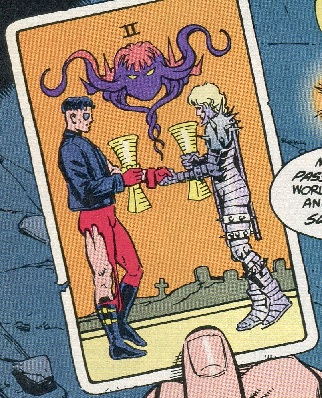 Superboy then gives Anima a run-down of what’s been happening on Earth and why he’s wearing an eye-patch. It seems that our heroine has stumbled upon one of those dystopian, alternate futures that crop up every now and then. In Courtney and Animus’ absence, the evil spirits of The Arkana invaded Earth and essentially established a fascist regime through domination of Hollywood and the entertainment industry (go figure…). They then sent Animus’ evil (or perhaps misunderstood) sister Eris to hunt down all of Earth’s superheroes and destroy them. Supposedly, Eris took Conner’s eye in an attack on him.

Shortly after Superboy brings Courtney up to speed, Eris attacks them both with Courtney’s brother, Jeremy, in tow. Jeremy seems to be named after that one Pearl Jam song and even looks like he took fashion tips from Eddie Vedder. Jeremy is brought along because Eris draws her power from him in a similar way to how Courtney draws power from Animus. 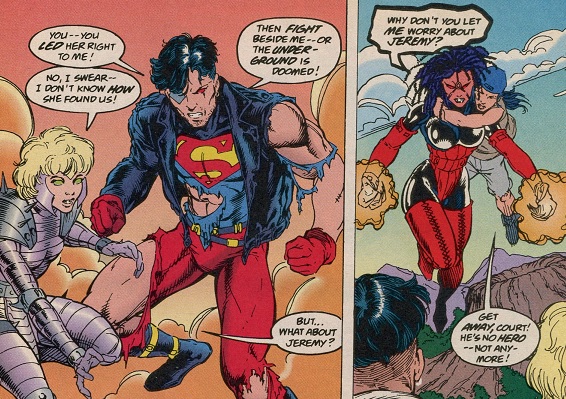 The battle starts pretty poorly as Kryptonians (and their clones) and magic don’t mix leaving Superboy vulnerable to Eris as Courtney is distracted by her brother. However, the tide turns after two significant events take place. First, Courtney notices that, with his eye-patch, Conner kind of resembles an Arkana spirit known as The Warrior. This allows her to use Superboy as a gateway to draw The Warrior out as back-up. This also gives Conner his other eye back! 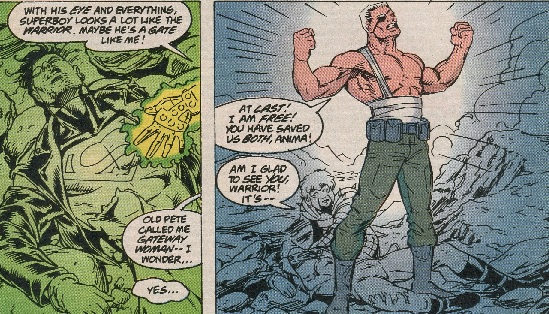 With Eris kept busy by Superboy and The Warrior, Courtney is able to get through to her brother. Jeremy feels remorse for what has happened which sends Eris back to The Arkana. That pretty much wraps up Superboy and Anima’s “date.” Even though it wasn’t seeing Hawaii under a full moon, it was pretty eventful! The Superboy/Anima pairing might not have much beyond this one issue, but… Courtney probably sums up best why we should be grateful we, at least, got this one issue. 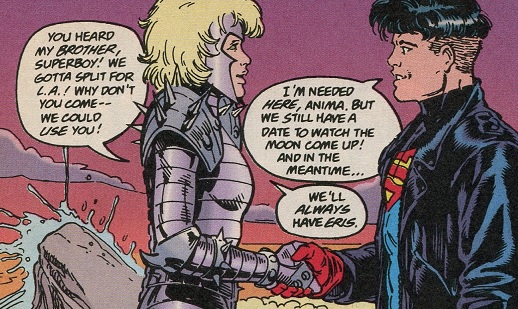 Anyway, thank you for humoring my nostalgic trip to 1995. Would you want to see more of the Conner/Courtney ship? Are there any other Superboy or Anima relationships you would like to see or see more of? Let me know in the comments!

Thank you for sharing all this! I love seeing people share comic memories and experiences. DCUI is great for catching up on storylines and events that I remember from when I was a kid and never really got the full picture of.

Anima was a character that I only have Zero Hour experience with because at the time, I got my comics from the drug store. I thought she was an interesting concept, but she never took off. I hope that her series does get digitized soon so that I can check it out properly.

Zero Hour is where I ran into Anima first, as well! …Well… either Zero Hour or the DC High 1994 Yearbook ad (I’m not sure which came first for me). 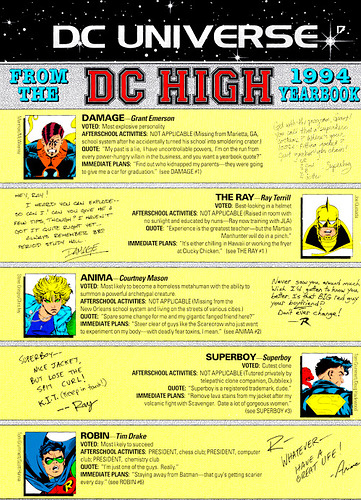 Regardless, one of the great things about crossover events is they can introduce you to characters you otherwise wouldn’t come across.

It would be great to have her full series digitized as the 3 issues I’ve read have been interesting. However, I understand it’s not exactly a high-demand title, so I’m willing to be patient.