Well you start with stuff thst should change like drawing him and dressing him either to young or to punk, as you can see his orignal look wasn’t “punk”,but you don’t just put a tshirt on him and thsts it either. You take from both and make it a more age appropriate, and “cool” not punk look.
You also don’t have him stuck only using one side of his powerset. Yes it’s cool to have kryptonian powers, but he has TTK, which can stay TTK or grow into what we seek during sins of youth or titans of tomorrow storylines when he was older, or Smallville season 11 and the new 52 when he is younger.
Why have lex as a DNA donor if he isnt ever used with Kon?
For names, maybe kon-el as a public name, or I’ve heard Scion, and there are more I can think up

And a massive rear projection tv.

I had a TV just like that years ago too lol

Remember how stretched out and terrible the image looked? Man!

Yep, but just like TVs have changed and only gotten better, our favorite comic characters need to do the same. What ways wpuld be good for Conner to change or improve moving forward in your, and everyone else’s opinions?

DC Round Robin 2022: The Final Face-Off! Voting is OPEN! Watchtower

I mean, he’s currently limited to appearing in Action Comics. Expanding on the character would first mean seeing him in more. Maybe give him a miniseries. Maybe put him on a team with an ongoing title. They definitely need to explore his intelligence seeing as how he essentially has Lex’s brainpower.

I love Kon!<3 I’ll admit I haven’t read a ton of his first solo run, and I’m probably weird as far as fans go since his post-resurrection stuff before the new52 hit is really my favorite. I just love that period of growth for him, seeing him become more grounded and comfortable with himself and starting to cultivate family and community in Smallville after repeatedly being used when he was new to the world and being pretty untethered for a while… I’m the rare person who actually prefers his t-shirt costume haha, Francis Manapul’s art of him in Adventure Comics 2009 was immaculate.

Anyway, I agree with @supercupcakez about Supernova as a name! I’d be okay with something else, but that’s one of the only suggestions I’ve seen for him that I actually like lol. I would love to see him get a new costume, too… the punk look doesn’t make any sense for him, and it makes me sad that so many artists now draw him even smaller and scrawnier than he was when he had the leather jacket in the 90s… He’s a clone of Superman, and it’s not like Lex Luthor is a small guy either! So a new costume that actually makes sense (I’m fine if they want him to keep the jacket, but I’d prefer that he ditch the spikes and put a new outfit under it; let the man move on with his life!), appropriate stature, and a new name would all be great! And seeing him develop his TTK more would be so cool, I love that power of his and I think he could be kind of amazingly terrifying (in a good way) if they let him actually use it again. I want a training montage!

I’m also really excited for what they do with him in the miniseries, I’m kind of hoping that we’ll get to see him grapple a bit with the grief of having lost an entire world? I admit I haven’t read every recent appearance of his, but I don’t feel like that’s been addressed much? Like, to emerge into a new world where you never existed and see that everyone you love is still doing just dandy, and in some cases even better than they were before? Ouch… I think that would be way more interesting than just a “who am I” arc when his 2010 solo was kind of all about him figuring that out. Imo him using the space road trip as an excuse to get some space (ha) from having to act like everything is normal for these new versions of everyone he loved and eventually coming to terms with moving on in this new world would be really gratifying to see, and him going back to earth at the end of it more ready to carve out his own space and establish himself as an important part of this world, too… I would love that!

The round Robin mini series will help with getting him back on track, and steering him in the right direction for sure.

And for the luthor brains, that should be a given, even if they have never used it or explored it, which is dumb. On the Titans show he has epigentic memory and has all lex and Clark’s memories,and I love thst new spin on him (even though the new 52 superboy did it 1st),thry need to bring this into the comics

In space yeah, with this “punk” look yeah thst works, back on earth it’s not my favorite name for him, but we shall see what they do with him

Yeah the 90s series was my favorite, but I read it in real time back then, and that’s what got me to walk into my LCS every month. I did like geoffs take in him though, and yes I’m a person who actually can wrap the 1st kon with the 2nd Conner into the same character pretty flawlessly.

Supernova goes really well with his punk look, which is not my preferred look for him. I would rather he go full on no cape no tights, and have him wear the black ad red S on a black or blue tshirt with a pair of cargo pants with combat boots, then add the leather jacket, fingerless gloves, and even the glasses to it, best of both worlds, and all his fans will recognize him and feel he is their character.

I hate that they draw him so small, hate it, he is a big kid, he was created to “look” like a exact copy of superman, not lex, so he should be a bigger guy. Clark is 6’3" 230ish, kon should be getting there also.

TTK was his 1sr and only power for his 1st 10 years of life, sins of youth, black zero, titans of tomorrow were all adult versions of him, and they all had TK powers, the fact that they ignore it completely and only let him have the standard kryptonian powerset is pretty much BS to me, and I can’t stand it personally. They should have him out in space over his head and needing to pull his TK out finally, and show him not exaclty doing great with it, but showing that it is immensely powerful still.

It’s crazy how some characters close to him don’t have memories of him, even when they still accept him. That could work for Cassie, she was his 1st time, his love, but say she doesn’t remember, that would kill him a Lil, but leave him open to try to rekindle their love or find a brand new one, maybe with someone who also feels like a outsider and better in space like miss Martian lol

It’s been ages since I read the original series, I remember him being physically 16, or so. I feel like his 5’10’’-ish appearance is fine. Keep in mind, Clark, as a teen, looked pretty “scrawny.” Kon was the first Superboy we had gotten in about ten years, and they based a lot of his design in old Superboy stuff. 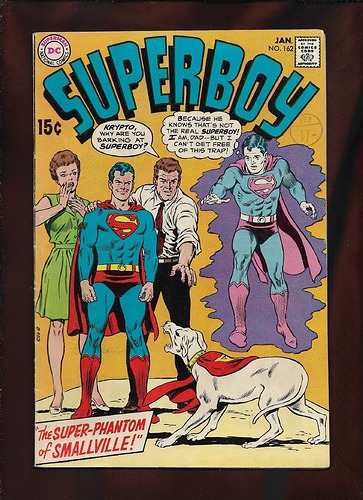 Well yeah I liked when he came out he was around 14 /15 and was a good kid size then. Now I see him at atleast 18 to 21 now and he should be bigger for sure.

Unless they freeze his aging again duh duh duh lol. Btw it happened 1st in the comics, not in the YJ show, they got the idea from the comics

I have no idea how old he is now, but he’s definitely closer to his beginning age according to the Bendis reintroduction. I’m guessing under 18, but definitely over 14. There’s nothing definitive with a Google search.

Before the 10 pages we have of the man of tomorrow mini and the preview pages from dark crisis YJ, he has been drawn older looking than he was right out of the cloning tube. Now if they want to change it up to make him younger to keep him a super BOY forever or atleast longer I can see that, but definitely older for sure

I always assumed he was about Tim’s age. 16ish.

I assumed Conner right before Flashpoint was 17-18,and now I would say 18-19,but DC is gonna be DC, dick and wally moved forward enough for them, no other characters need to do thst anymore

The last time I saw Tim’s age mentioned was back in Red Robin. He was 17. I don’t know if that holds. He’s likely either 16 or 17. I imagine that Kon is the same age because of Tim’s age.

Yeah, I’m pretty sure Tim is 16 right now. I feel like I read a comic semi-recently where he said he was 16.

As for Kon, I’m a big Kon fan! I read Young Justice as a Tim and Bart fan and became a Kon fan along the way. I haven’t read his solo series from that time period yet. But I plan to.