I don’t typically shares these on here, but this guy’s collection was just too awesome not to share. Check out the collection of Rasoul Ezzat-Ahmadid! 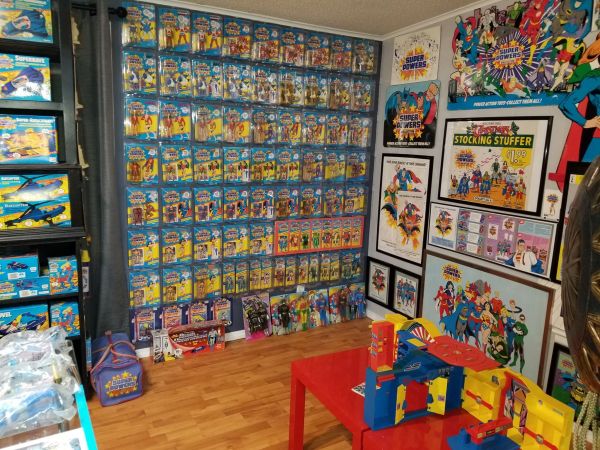 SPOTLIGHT: THE COLLECTION OF RASOUL EZZAT-AHMADI

Welcome to the DCCollectors collection spotlight, where we showcase one of your DC-themed collections! Whether it is a fan just starting out with a small collection, to some of the largest collecti…

That’s museum quality work. Super Powers holds a special place in my childhood. I have all of mine still, chipped paint and replacement capes from other toys. I’ve gradually been tracking down the loose characters I didn’t have.
God, the 80’s were a golden age for toys. Super Powers, Masters of the Universe, GI Joe, Transformers, Star Wars but also Visionaries, GoBots and I was obsessed with Dino Riders. I know there are more. Secret Wars was around but I never had those.
I digress, great Super Powers collection. I will definitely go back and scrutinize the pictures.

Rasoul obviously does not mess around. Talk about dedication. And that room, everything so neatly and meticulously displayed. Not only every figure, but every card variation? I’m amazed by his persistence, and respect the clear focus of his collection.

Reminds me of when I started out collecting. Super Powers is what got me started, for the very reason of nostalgia that he eloquently mentions. When all was said & done, I had loose figures of about half of the whole line along with a Hall of Justice and the carrying case. I ended up selling all of them (except for the Trinity), including a complete “minty” Cyborg with an opened card, to finance another piece. I miss them, but ultimately don’t regret it. It gave me a bit of direction with my collecting, since I was also interested in other lines. It ultimately ties into his advice, which I agree with %100: collect what you love, not for investment, and be mindful of cost and space.

A nice highlight and trip down memory lane this morning. Thank you @ashleywilbanks for sharing, and please thank Rasoul for virtually letting us into his showroom as well

Thanks for sharing that, @ashleywilbanks.

If my interest in collecting smaller figures ever resurfaces. I think I will go the super friends route.