[Super man girl Fan Club] and Supergal Fans at large, did you say you want ANOTHER heaping serving of Supergirl Silver and Bronze Age Goodness from our “sister” site DC Universe Infinite even after having a recent month of this featured from the Characters of DC Club? We gotcha covered!

Plus…we also have two Listen Alongs a month on Wednesday evenings featuring the Adventures of Superman Radio Show of the 1940s! The next one is August 4th, The Talking Cat saga!!! 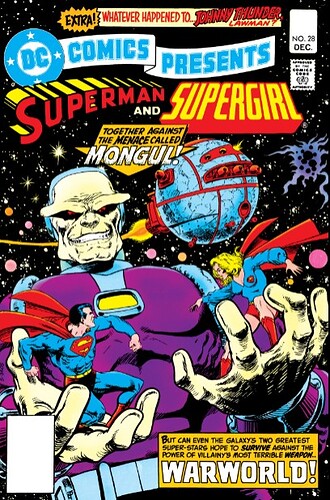 And be sure keep an eye out for our twice a month Wednesday evening Listen A Longs of the classic 1940’s Superman Radio Show adventures, the first and third Wednesdays of the month (in the Watchalong aisle). 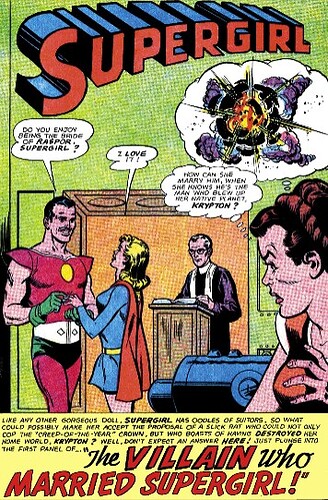 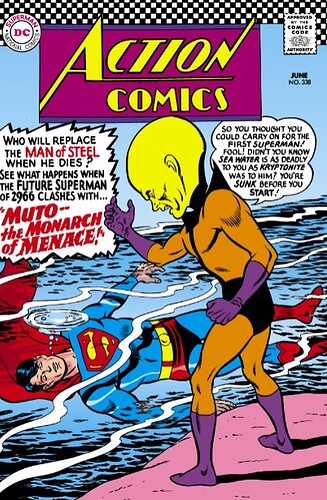 and some other story about a future Superman being drowned by an alien with a lightbulb-shaped yellow head and a chip on his shoulder blah blah blah…. Please take special note though, the Supergirl story was Jerry Siegel’s last story told at DC (thanks for letting us know @CaptainYesterday !) 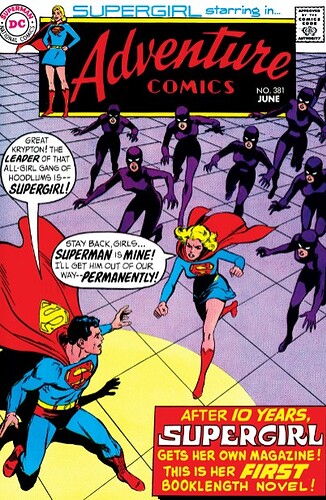 Adventure Comics #381 (June 1969) DC UNIVERSE INFINITE Totally reasonable for her first time being the star of Adventure Comics, Supergirl leads an all-girl gang of hoodlums (I guess Jimmy O imitates this a year or two later).

Just look at that byline! I’m callin my counselor, moommmieee! 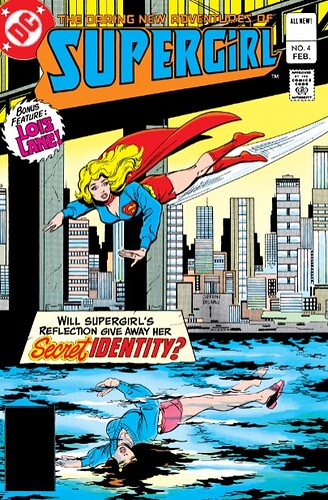 Daring New Adventures of Supergirl #4 (released December 1982) DC UNIVERSE INFINITE " Hail, Hail, the Gang’s All Here ” A team of super-villains known as Kong, Mesmer, Bulldozer and Brains, who make up the Gang, strike, and Supergirl has to deal with them and a visit from her parents in. And…a Lois Lane story continues in the back of the comic!!! 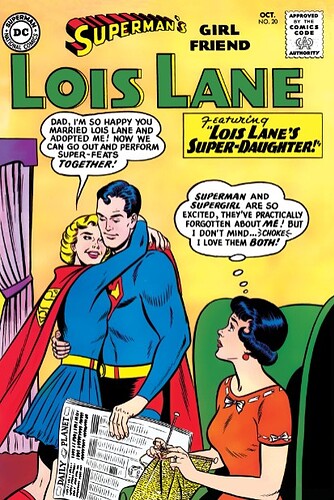 Please let us know your thoughts these classic Silver and Bronze Age Supergirl wares from before she was cruelly swept under the literary rug in 1986!

Wow this is a lot of Supergirl stories!!!

Supergirl to the rescue! I love Kara

This was an interesting assortment of stories. I definitely prefer the more modern Supergirl to the older stories. The imaginary Lois Lane story would definitely never work today! No one would dare tell a mother she couldnt have a job.

Oh I totally agree. Part of the importance I feel of these older stories being digitized and available to the public is to remind us of what we’ve gone past, to remind us of how ridiculous a lot of these views are when ghosts of them spring up today.

Here’s one from the same Lois Lane comic that is seen over and over again today on internet social media sites concerning celebrities, where a female only is respected if they remain looking like they’re 20 years old 30 years later, a standard almost never applied to males. 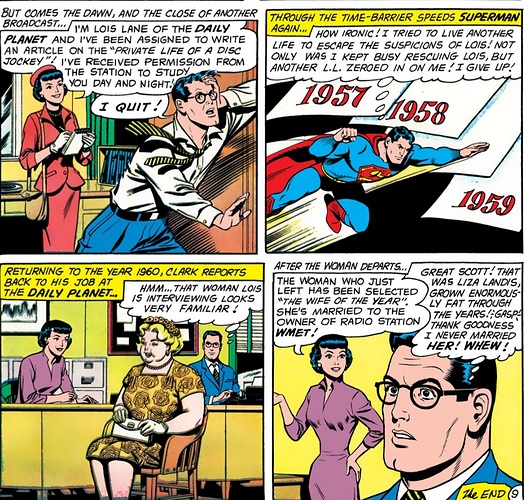 Yep some of the stuff society has moved past, some of it we are still trying to figure out.

Federation of Planets? Normally they hand out five year missions don’t they?
The editor is a computer, AI took over. At least it has a plaque dedicated to Perry.
Lyra 3916 likes Klar, but thinks Superman is a jerk, nice twist.
I want the full story of the fourth Superman that had to expose his secret ID to prevent yet another monorail disaster.
The federation outlaws war and collects all the weapons on one planet and leaves them there. Unguarded. Still working. They will probably sell them off to people like PN Guin who use PO Boxes.
Good to know they still have applecarts in 2966. Where is the Legion anyway?
Salt water? I can hear Aquaman laughing from thousands of miles away.

to be continued! what is this Marvel?

A reader from Canada writes to ask why Superman doesn’t end the war in “Viet Nam.”

Editor: “Superman figures the US is good enough to win this conflict without his help. Besides, warfare involves killing, which is against his moral code.”

This is one of the first Supergirl stories I ever read as it was reprinted in Superman Family #173. Poor Ragnol, imprisioned forever for a crime he boasted about, but didn’t actually commit.

TRIVIA
You know Action Comics #1 was the first issue Jerry Siegel ever did. This Supergirl story is the last one. And the last story he ever did for DC Comics.

This change from Superboy & the Legion to Supergirl in 1969 would have made me sent an angry letter, but I wasn’t born for another eight months.

Superman is way out of town…on Earth Two to be exact.
The burglars are a pair of ears from being Catwomen circa 1986.
She just waltzes right into the Batcave and starts using the Crime Computer since Bruce and Dick are out of town too. If she did that in 2021, Batfans would demand the character be erased from DC Comics.
Sleuth School huh? It does allow for her to be Linda for a bit.
Qualification #1: the girl doesn’t faint when someone attacks her. Real progress from 20 year old Cary Bates.
Is Barbour working for Oracle? This does have the makings of a Birds of Prey story. Oh wait.
“Trust Me, I know I know What I’m doing.” Sledge Hammer 1986.

Jerry Siegel’s last story was the humble Supergirl backstory in Action this time around, I’ll add that to the thread header, thanks!

Speaking of Superman family, I’m so happy I picked up another three issues of those a week or so ago at a flea market. Big zip on dcui for them.

FLIGHT FROM LOIS LANE
An overnight DJ at a radio station. The one job Bruce Wayne could never take!
Here’s the top of the Billboard charts from that time.

At least Lois is still getting hard news stories in this new timeline, not stuffed over in the personal columns.

This is probably more of a Superman story than a Lois story. He’s trapped no matter how he tries to get away.

LUCKIEST GIRL IN METROPOLIS
This is more like it. Lois exposes criminals and they try to take her out for running her big mouth.

I really like the way Al Plastino drew Lois in this story.

This story couldn’t happen in out digital photo world.

Should you adopt your own teenage cousin?..on the next Donohue.

Why should Lois give up her job? They’re adopting a teenager, the adoption people should be thrilled and doing anything to make it happen.

Plot twist! Clark decides to quit HIS job to be a stay at home dad and now he and Supergirl can fight crime all day!

If Krypto had been at home, I bet he would have tried to bite Mrs. Clayton and she’d have him taken away by the sheriff. She looks like she sells Folgers coffee in her spare time too.
Witch.

At least when Marge Simpson was bored at home with nothing to do she was allowed to drink wine.

I’m not fooled Lois. She did that on purpose to get Supergirl back to the orphanage.

“Who wants to live forever anyway?”

The usual excellent tale from Len Wein. I wonder if anyone who worked on creating the Borg in ST:TNG had read this comic a decade earlier?

I’m a big fan of the artwork for the Lois Lane series in the late 50s / early 60s. It has that little touch of whimsy that makes it entertaining while reading it.

My favorite thing about this early 1980s story is the use of a weakness for Supergirl that make sense, namely hypnotism. 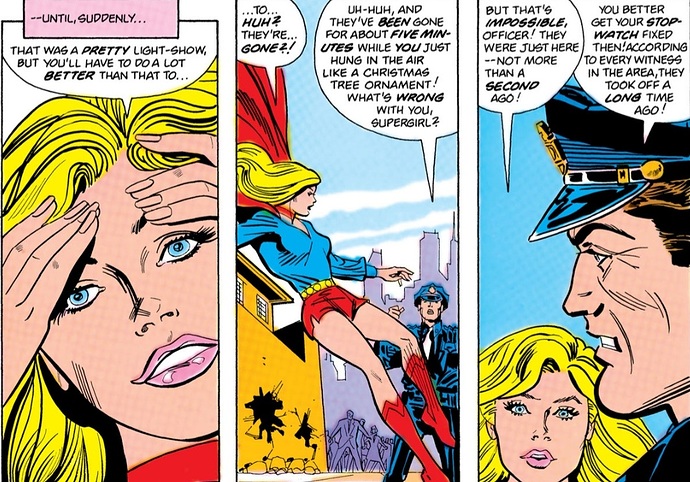 … and then at the end of the story:

Just because you’re super strong doesn’t mean you can’t be hypnotized or that your brain is super strong.