I’m thinking about watching DC shows with football themes. I know about Wonder Woman’s episode, “The Deadly Sting,” but wondered if there were any other shows that I’m forgetting. Even episodes with football players in them would be OK…

I forgot the name but there was on BTAS episode were several athletes including Dick Grayson’s roommate who was a football player who were strangely performing terribly. You should check it out

Several Smallville episodes would fit the bill: season 1 episode 4 (i think) Hothead and several season 4 episodes: there is the one with Myxlptlk (spelling?) and the one where Clark visits Met U. There is also the season 5 episode with Vic Stone Cyborg.

not watching the super bowl id rather watch half time heat😁

Mike, I’m not watching the Super Bowl either, which is why I am trying to get a watch list for DC together.

You can pop on The Dark Knight Rises and FF to the explosion at the football stadium. It’s a movie and not a TV show, but spoats is spoats.

I’ll be watching the puppy bowl. Is the craziest idea I’ve seen in a long time.

if you havent seen it yet @movieaddict you should watch justice league:Thorne Of Atlantis i just watched it and i enjoyed it

“bump” I seen the puppy bowl and it is sooo… cute

There are also episodes that guest starred football players. Bubba Smith in the “Light Fingered Lady” of Wonder Woman, Bo Jackson in “The Rival” of Lois & Clark, “The Girl With a Gift for Disaster” WW with Dick Butkus, and Ron Ely in Suoerboy’s “The Road to Hell pt 2” and the already mentioned “The Deadly Sting” on WW. There are also episodes of The Greatest American Hero and The Six Million Dollar Man that are about or have football players in them.

Just another reason the DC Universe needs a live stream as well, they can show marathons like this on special days…

Not a DC show, but there is a football-themed Marvel comic out there. 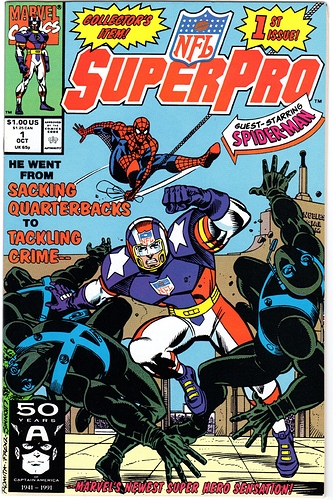 Thanks for all the suggestions. Enjoying the shows today. Smallville is a wealth of content, thanks for the reminder on it. Hope everyone is having a great Super Sunday!!!

shakes his head at SuperPro I had one issue of that when I was a kid and even then I knew it was stupid. But hey, it’s a “Collector’s Item!” so…yeah.

Batman TAS episode “Fear of Victory” is another one…

The Justice League 2 parter Secret Society. The scene when Superman flicks Grodd through the goal post is one of my favorites.