Hey Everyone make sure to read my update on the club here: 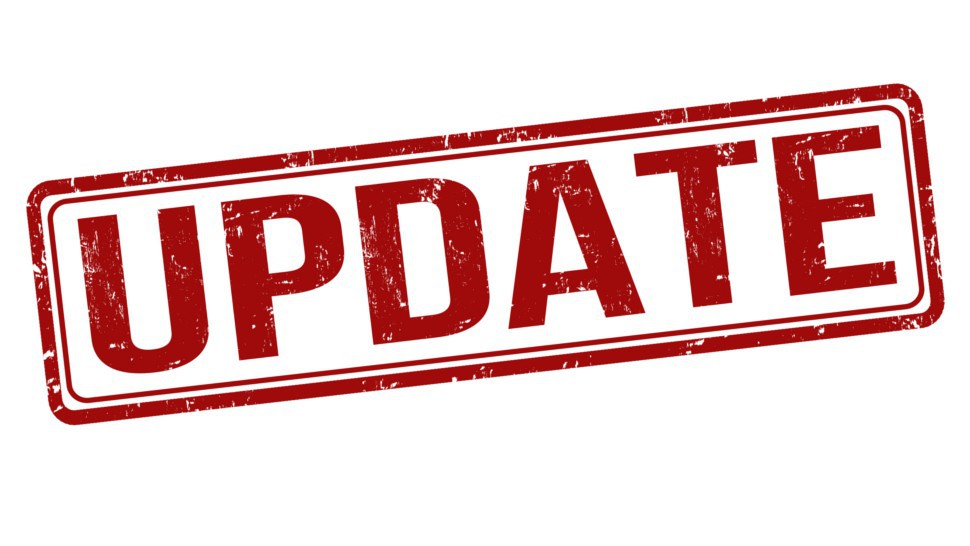 Update on the Summer of Events Book Club

Hey Everyone, Thanks for coming and supporting the club, I’ve had a blast, and I can’t wait to keep it up. However, the number of series per week that fit into the Summer Of Events is increasing with some tie ins so I wanted to give an update on my...

If you don’t feel like reading the update, I’ve started another chat for Summer of Events Extra Credit which will cover the Tie-ins and smaller series. I’m trying to keep the main book club at 2 titles a week. Extra Credit could be upwards of 6 issues a week. 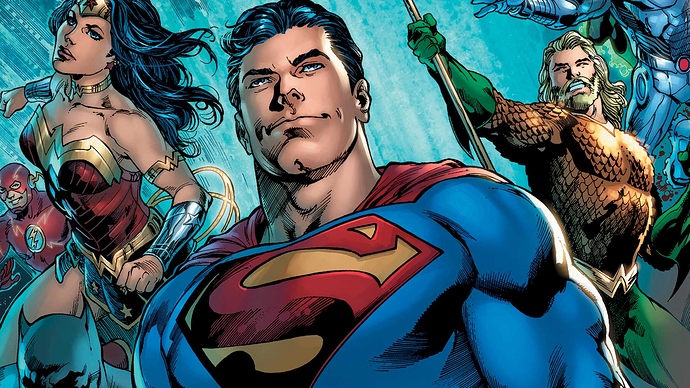 Let’s talk about Justice no Justice. #4

I think the task force will still be around. And I think Cyborg should be the chairman, though apart of me thinks Superman, Batman, Wonder Woman should share being chairman and I know most people would roll their eyes at that.

Cyborg is connected to the Watchtower(I think) at all times, hes a living database and hes got access to basically all information at all times through his motherbox a.i right? He just has to ask it any questions like google. It only doesnt know some extraterrestrials or magic stuff.

Thats my assumption about Cyborgs abilities anyway. Hes also well respected and well liked, the only thing is he is kind of the rookie. Cyborg wasnt always a Justice League member.

Superman finds crime through listening and scanning the city with his multiple visions. He also investigates crimes on his own.

@majorZuma but how do you do crime without being caught?

Through distractions I guess. You have to have multiple things going on at once, not even Superman can be at 2 places at once.

You know I’m a pretty smart guy even at my ancient age and I got to say I am confused why Earth would be one energy. I’m pretty sure Colu had some kind of representation of all four energies that was going to blow it up if they didn’t neutralize them or whatever but that’s okay I get it …like I said for the other issues, there’s so many Deus Ex machina’s in this thing, I will not be surprised to find out that Bugs Bunny is the new chairperson of JLA.

So I guess I’ll say Earth will be mystery. And I’m pretty sure the Justice League breaks off into three or four leagues right so wouldn’t there be three or four chair people? I mean Cyborg apparently becomes one, but I think there are going to be others, maybe Wonder Woman will head up some other team Etc.

@don-el I like mystery. The world is full of unknown depths and hidden wonders. Past we don’t know and futures we can’t predict. We worry about others and question what is going on in other countries. Mystery is certainly apart of humanity, but is there something more?

Last day to discuss this before man of Steel. Fo people who don’t get around to it. You can continue the discussion for Justice League but know that you will get man of steel spoilers

Prof Payson, I’m turning in my paper late, just dock my by 20 points…

Justice League: No Justice #4- I was sorry to see Vril Dox go dark like that, I honestly do plan to lead book clubs here reading L.E.G.I.O.N and the even better R.E.B.E.L.S.

The big theme is one that is very relevant to our world today: is it really always wise to dabble with energies and powers we don’t fully understand before unleashing? These days that could even include the unintended consequences of participating in Community here: we just don’t know, it’s all new. But really I am thinking of the consequences of a world wide group mind that occurs when all of us live life together here: there’s good, but as we have seen here a few times so far in our brief history, there can be negative powerful stuff too.

Perfect reading material for a digital unlimited platform. Some characters like Luthor really pop out as intriguing; for the most part, everyone else is dimmed by the constant incomprehensible action.

Rating of series: 5.0 out of 10.0 This is mainly a platform to relaunch Justice League team books in my opinion. My mind doesn’t buy or accept the underlying literary logic of the breach of the Source Wall, the four hungry beings, etc. DC is trying to go Marvel Cosmic in all the bad ways (Eternals / Celestials etc), instead of leaning into the “good” Keith Giffen Annihilation Marvel Cosmic…

Again, nice to see the old Amanda back! 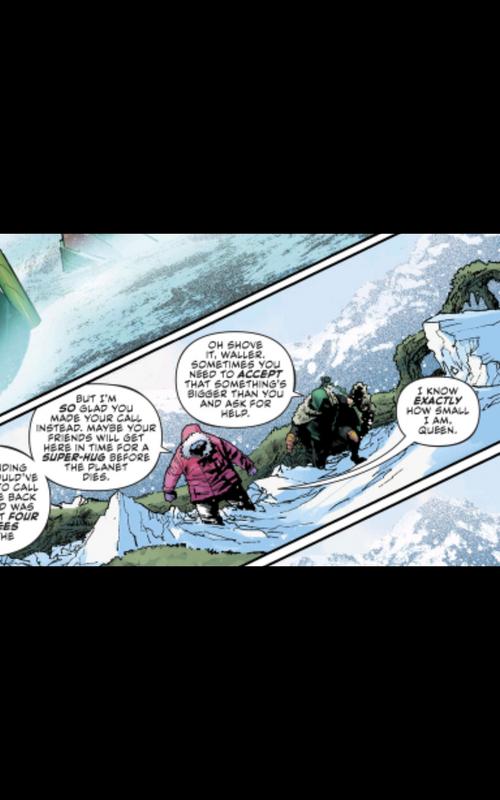 Last comment on Justice League No Justice: the quality of the panel by panel at times is bad, just poor, very grainy. This is puzzling as our buddy Vroom enjoys buying this stuff digital new. Vroom, do you read panel by panel view or page by page?

I mainly read this page by page on my 10 inch Android Samsung, but some pages I had to resort to panel by panel to read the (forgettable pseudo science babble) text.

I liked the No Justice series, it was kind of a build up segway into the new Justice League titles. I thought the quality was good, the art was good.

My only gripe about DCU is that the comics crash the app frequently for me. I dont see it get reported on the Support/Feedback so I guess its just my device, but it crashes a lot for me.

@donel on mobile make sure to select the HD option

Discussion for Man of Steel is now open!

I actually read it when it came out, back when I still had to buy DC Comics in paper form, but today will be the day I read it again!!

Strangely I don’t recall enjoying this comic as much when I read it via paper a year ago the first time. Maybe the panel by panel (which was flawless for once) did the trick, who knows?

Excellent art, fantastic engaging dialogue, hyper attention to the minute by minute second by second fictional reality of what living in a city protected by Superman would be like for both criminals, citizens and regular human type heroes.

The introduction of honored galactic war vet Rogol Zaar is done deeply, and we get the sense he is about to go down the path of another decorated war vet, the Punisher…

When this came out I was still trying to understand and emotionally trust the “new” married with children Superman that hopped from one reality to ours. Since this is all so new to DC, it does give Bendis some nice wiggle room to expand on the relationships between Lois and Clark both professionally and in their marriage.

I’m pretty sure Bendis is tipping his writer’s hat to a professional competition the two playfully have at work with this scene: 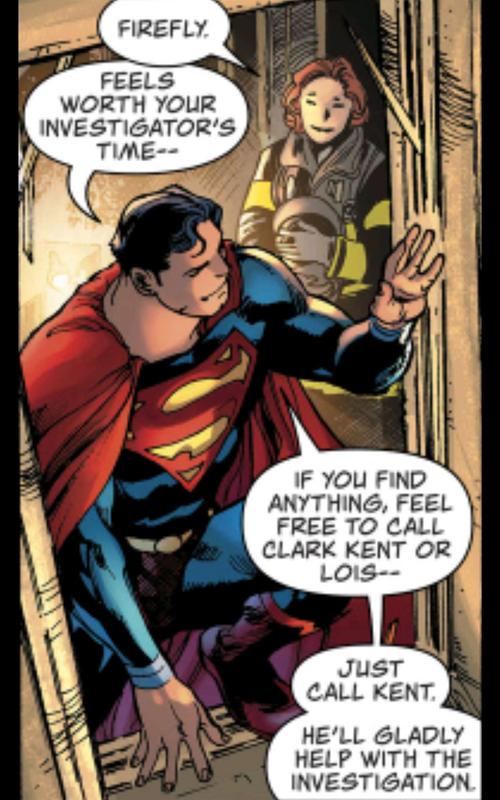 I got a question regarding Flash War pt1. (I know this was last weeks reading but…). Why are the Renegades accusing Iris of Eobards murder? I thought he was killed in The Button presumably by Dr. Manhattan.

@oversizedGeek. Eobard is confusing. He has a habit of “dying” and reappearing. He does die in The Button, but his appearance results in the spin off of Flash with Vol. 4. He dies in Flash Annual #2 I think? Iris kills him. SO yes Thawne has died twice…

@don-el if I had to guess, you hated the series as it went on. The mini-series is great BUT!!! It is solid. Just realize it has parts that are fairly slowly paced. There’s a lot that gets left behind after the arc is started. Rogal Zar’s story is saved for the Supergirl soft reboot for example.