The Summer of Events continues with Week 2.

This Week is the only 1 issue week of the book club.

Discussion starts when the comic releases to DCU! For those who are just tuning in, feel free to add to last weeks discussion where we read Flash #46 (The Road to Flash War) and Justice League: No Justice #1.

(P.S. This post is here early so I can add it to the Community Events Calendar)

Justice League: No Justice is up!

Ah ha! Thanks for the update @Nathan.Payson

I can do this!!! Sooooon

Yes you can!!! (thinking of bob the builder)

We have till Tuesday to read this right?

I feel Waller is a villain who believes herself a hero. Believing she is doing what is best for the country and the world but in the way a dictator would.

There really are no leaders yet as Waller took out the one being that knew what was going on. The teams are pretty much winging it at this point.

I know nothing of Brainiac 2.0 so the last reveal fell flat for me.

@oversizedGeek that’s probably the best way to explain Waller honestly. I will steal that explanation of her from now on!

@oversizedgeek On Brainiac 2.0, I only liked it because of Brainiac 5 from Legion.

Funniest Moment: hmmm, not sure I saw any? I’m not super comfortable with how either Lobo or Starro are portrayed here, and they are the closest to comedic effect I can find in this. Lobo is a little too “domesticated” here, I prefer the all-out nutso version we see in the current Young Justice animated series. Starro has long been a fav villain of mine, his effect reminds me much of the group / mob unthinking madness our various real Earth cultures are full of with our traditions and biases we don’t analyze and re evaluate.

On what these various world would look like: I actually have a piece of fiction I wrote that of course was never published that did a similar “concept” world approach, back in 1972 or so, while my dorm buddies looked on astonished, stating they had never witnessed someone banging away on a typewriter creating a story world for fun. Each of these concept worlds you are asking about are up for interpretation. They are the kind of philosophical / spiritual summations that are based on core assumptions about reality, the grist for the Ethics 101 or Foundations of Morality courses in college. I frankly don’t agree at all with the assumed definition of Wisdom here. Wisdom is not Google. Wisdom is Google applied in a way that brings a positive outcome to the participant and their surrounding world. Colu knowing stuff doesn’t make them wise, it makes them a boring eidetic memory person who never forgets any moment of their life. That doesn’t make you wise.

So, I do have ideas on what these four worlds would look like, but it would take a bit to expound them: Wisdom world: think Solomon / Book of Proverbs / Queen of Sheba traveling to participate and grow. Mystery: a section of the galaxy that highlights all in life that we wish we had the solid answers to, but never will in this life. Why are we self-aware? Why are we self-destructive over and over? How can the universe be eternal or ever once created, when neither make rational sense as we understand cause and effect? etc… A world or section of the galaxy showing Entropy wouldn’t exist. You can’t have Entropy without Order / systems, any more than you can have fire without fuel. So I guess the Entropy world would be what we see as we read or type on DCU Community in the background…

Is Waller a hero or villain? First, it’s great to see my favorite version of Amanda Waller here. That younger thinner version of her was not too believable in New52 etc (or on Arrow). I prefer a seasoned federal employee that has taken several career decades to grow a network of insiders and has survived several administrations and national crises. Not to keep being Don-el the Unbeliever, but I don’t really buy into this Waller in “No Justice.” The Waller I know from Ostrander’s run of Suicide Squad is the baseline Waller to me, not this frankly insane and impulsive Waller we are seeing here. Waller of the 1980’s run wouldn’t have pushed the red button to start WWIII, and she wouldn’t have blown up Brainiac’s head when he was leading a mission with the heroes and villains of Earth. She would have been too (wait fo it…) WISE to do that… 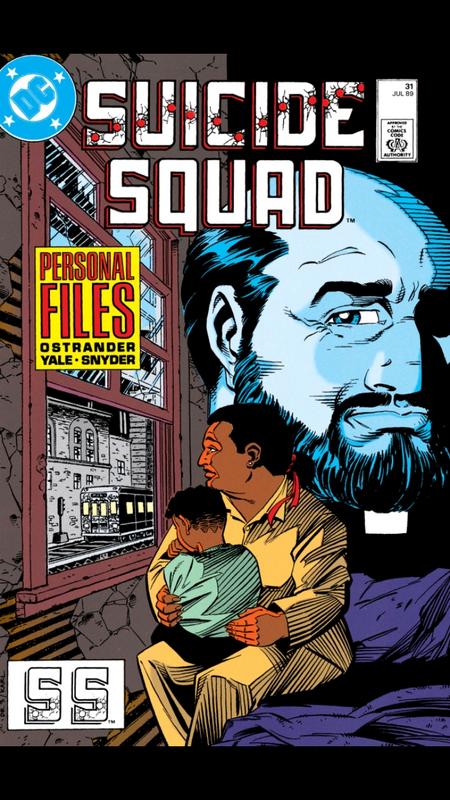 Last page reveal? I am maybe the biggest L.E.G.I.O.N. / R.E.B.E.L.S fan alive!! I am delighted to see Vril Dox show up as the worse of the worse criminals locked away in the core of the Colu prision! I am super-tempted to make L.E.G.I.O.N. and R.E.B.E.L.S part of the Legion club territory!

By the way, an aside, does anyone know where Tony Bedard, one of my fav writers of all time, may be hiding these days??

Starro: as noted before, not the Starro I know, love and fear. This is some frat boy, iii yii yii yii yii…

Who is the leader? Batman of course!

Oh, Wonder world / section of space: the stuff we can rationally understand, but that hits us as barely being able to be conceived of or witnessed. My wife and I took a hotel room on the 26th floor in late January as we celebrated our 45th, and could see the Horseshoe Falls constantly. We would just sit for hours watching the constant energy…eventually though the “wonder” became overwhelming to my human senses and I had to close the drapes for a bit, actually nerve-wracking in it’s power.

There are lots of processes in nature / the universe that are equally just at the edge of what our senses can handle, at first beautiful or inspiring beyond anything we could have concocted before we saw it, but overwhelming to us if we gaze too long…