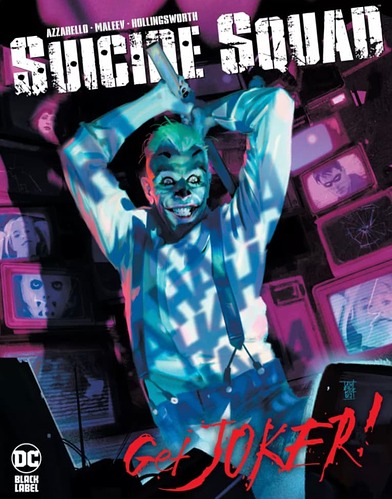 In our library: Suicide Squad: Get Joker! #1

The variant for Book 1. 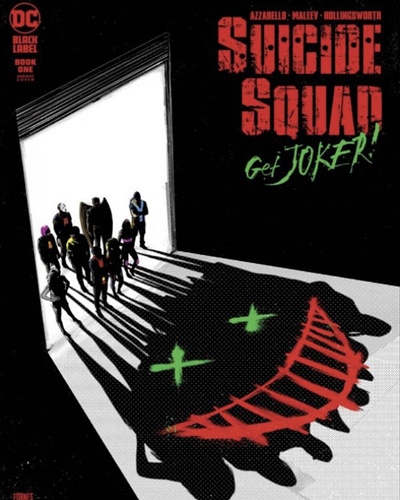 I had a confuse at first, then I realized: Ohhh, this isn’t on DCUI yet… Hmm… I guess I have a decision to make.

Since we’re gonna see Red Hood and Harley team up, I only feel it would be appropriate to share literally the only panel from their first collab (also for the Squad) from RHATO Rebirth: 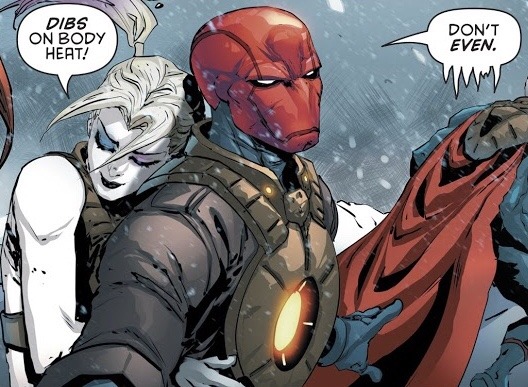 I read it when it came out and I remember liking it well enough. It was mostly set-up, handling the gathering of the team, but the cliffhanger we get at the end I think was what made me want to pick up the next issue.

I do want to point out that there was a little controversy with this book when it came out – what, a Brian Azzarello Black Label book having controversy, “how can that be,” right? Basically, the co-creator of Wild Dog, Terry Beatty, went to his Facebook and slammed DC for having Wild Dog be in prison in this series for leading the January 6th riots.

This is not the Wild Dog Max Allan Collins and I created. We are both angered and appalled at this offensive and out of character reworking of our hero. Yes, he was a vigilante. Yes, he was a gun nut.* But he wasn’t a conspiracy theory idiot or leader of a mob. This blatant disregard and disrespect for the creators’ intent is a slap in the face to both of us.

It seems additionally insulting, considering the positive portrayal of Wild Dog as a POC on the CW ARROW TV series. To now make him the leader of a mob of racist, violent, moronic goons pretty much destroys any possibility of future use of him as an actual hero – vigilante or not. 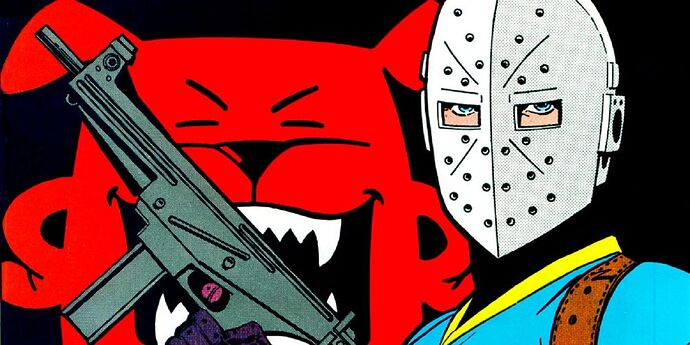 Suicide Squad: Wild Dog Creator Slams DC's Portrayal of the Character as an...

I really don’t think this take on Wild Dog is really going to stick, but I can totally understand being pissed off about this take on him. I think the big part was literally referencing an actual event. I think if they made up a smaller, similar riot, maybe imply that the police named him the ring-leader of the violence and Dog claims that the police started it, that might have been more true to the character – at least from what little I have read of him.

I really enjoyed the 1st issue.

For starters, it was nice to see a certain cameo…

I had a confuse at first, then I realized: Ohhh, this isn’t on DCUI yet… Hmm… I guess I have a decision to make.

@iJest Oh no! I’m sorry! You prbly got all disappointed its not here.

Definitely check it out if you get a chance. I’m enjoying it so far! Like @Jay_Kay said, there’s ground work being laid in Book 1, but I feel like it has the potential to be pretty great when all is said and done.

Definitely on board for Book 2 next week.

Me either. This being a Black Label mini-series, I’m sure Azzarello was given free reign to do whatever he wanted. In his defense, its not too far a stretch to think a vigilante gun nut would go that route

What’s up @Razzzcat -how’ve you been?

I was really excited for a Suicide Squad Black Label book, especially w/ Maleev on art, but it’s safe to say the 1st issue killed most of my hype for this. The Capitol riot connection felt like a really cheap, lazy attempt at political commentary, which I certainly don’t mind having in comics in general, but this was about as subtle as…well, a crowbar to the face. And furthermore, I hated how Waller was treated in this one. Not only was she apparently the only character not allowed to curse for some reason, but I just don’t understand how Joker and his crew were even able to get to her at the end. I know she wasn’t actively running the mission at that point, but I don’t understand why she seemed to have absolutely no security in her apartment. I suppose this could still end up being a fakeout, but for now, this whole issue just made a pretty bad first impression in my book

Not only was she apparently the only character not allowed to curse for some reason,

Okay, cursing in the Black Label line at this point is super weird. Like I’ve been reading Batman/Catwoman as well as Strange Adventures as they came out, and while I think it becomes extremely distracting to see all the little @#$! stuff in the balloons, especially in the most recent issue of Strange which completely took me out of the book, I figured the idea was that DC didn’t want their superhero characters to swear in books. Okay, fair enough.

But then we get this book, where Jason swears, but Waller doesn’t. Like…what is going on here?

I do think full cursing should be allowed in Black Label, but if it’s gonna be censored, it should at least be consistent

1 theory I have about Waller is that the pages where her cursing is censored was part of a Free Comic Book Day preview, so it makes sense that the cursing would be censored in a free book like that. But maybe someone forgot to change it back for the actual book

i got the variant from acme comic on free comic day

@arkhamassassin That’s a valid point. As you said, referencing real life events isn’t necessarily a bad thing (or new) in comics, tho. It happens pretty frequently, so perhaps this is a “too soon” situation that made it feel heavy-handed.

I did find the whole Russian thing rather tongue-in-cheek, and that’s how my brain took it: tiny jabs at things we, as a society, really shouldn’t ignore. No different than referencing other historical events, and hopefully learning from them so we

she’s still being manipulative and generally Waller-like, so maybe the thought was she doesn’t need the cursing?? (Or maybe they DID forgot to switch it back. Lol!) I’m a bit more intrigued as to why it wasn’t a touch more violent for a Black Label w/ Azzarello and Redhood w/ the Squad, but…it’s early, lol.

What’s up @Razzzcat -how’ve you been?

I’m doin’ all right—can’t complain. How are you? Been a min. Here’s a thread for Book 2, if you’ll be checking it out, btw:

I’m not sure it warrants Joker’s involvement beyond motivating Jason just yet, but I’m definitely liking Jason w/ the Suicide Squad.

Not too bad, all things considered.

I bought book 2 yesterday and will sit down and read it today- can’t wait!

I am surprised it took DC this long to have Waller decided to take out the Joker.
Well, it’s likely that waller was betrayed. However, given Joker was reenacting a famous scene From A Clockwork Orange it could have been a LOT worse for her.

As to the censored thing…well Jason was censored too in my digital copy off Amazon Kindle.