James Gunn has announced his official cast list for the movie

This looks absolutely insane. Not only am I so glad to see Margot Robbie, Viola Davis and Jai Courtney back, but the rest of the cast looks great too. I mean, Taika Waititi in a DC movie? Sign me up 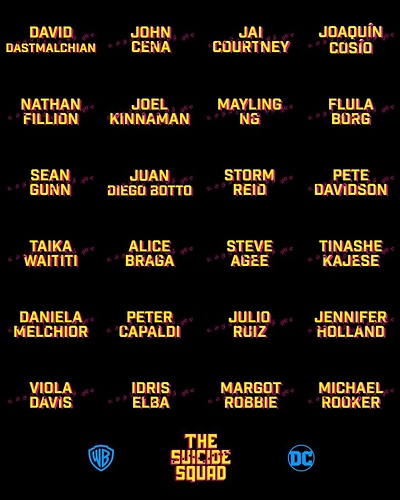 The best parts of Suicide Squad 1 are back! And so is Joel Kinnaman! (I kid, I really like him in other stuff by Rick Flagg was not great.)

So no more Will Smith? Looks like I’ll spend money to see it in theater this time

I just wanna know who Nathan and John are playing

Idris Elba’s been acting up a storm for a while now. Does he owe someone money or something, or does he just have a heck of a work ethic?

So psyched to see they got Cena. He will most likely be playing Peacemaker, and it’s perfect for him.

Was hoping Bautista would be involved somehow. I could see him as a good Peacemaker. Still, great to know that Michael Rooker somehow survived Brightburn’s rampage.

Honestly, surprised Batista’s not in this movie, considering he was publicly and loudly in Gunn’s corner after Disney fired him.

@DGWJTWTDW, any particular reason why?

Personal reasons rather than artistic ones. I think he could be a match for the material.

Gunn, at some point: I totally understand that making fun of particularly vulnerable victims of sexual abuse isn’t nice. I realize that what I did was wrong (something like that). I am grown up now and would not do something so poorly thought through again. I am reformed.

Also Gunn, in the process of making GOTG2, a film that will inevitably be seen by thousands of children regardless of rating due to the talking raccoon and Groot: So we’re going to have this character named Mantis . . .

Other person: Ok. What is her deal?

Gunn: She’s going to be able to touch people and know their emotions.

OP: Oh. So that will play into the plot a lot.

Gunn: No, she’s only going to use it once, for the LOLs.

OP: Ok,so what else can she do?

Gunn She can touch people and make them instantly fall asleep.

Gunn: We’re both adults right? What involves touching, emotions in some way, and notoriously puts people to sleep?

OP: Oh I see! To get it past the MPAA. So she’s like Kurt Russell’s lover or something?

Gunn: Yeah, sorta. She’s going to give the GOTG all these desperate little looks and always be like “there’s something I have to tell you! It’s about him! He can’t know!”

OP: Sounds like she’s there against her will. So, like a sex slave! Ok, Kurt Russell is evil in this, it checks out. So I bet our heroes rescue her in the end?

OP: So instead of listening to the obvious victim of evil, our heroes are going to make fun of the appearance and sex appeal of a metaphorical sex slave?

Gunn: It’ll be hilarious! We might even end the movie on it.

I don’t even get excited at seeing Margot Robbie’s name anymore after what I’ve seen she’s doing to my/our BoP.