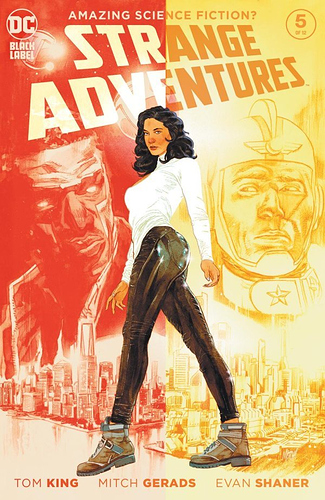 CHAPTER 5: ON THE OTHER HAND

“Mr. Terrific is back on Earth, and he’s making things hot for Adam Strange—but he also might get a little burned himself! The conflict is out in the open now, and the court of public opinion doesn’t play fair. Mr. Terrific was picked to investigate the accusations against Adam Strange because he was the most impartial member of the Justice League—but can even he keep all of this from getting personal? As we witness more of Adam’s adventures in outer space, will his version of events jibe with the facts, or will they continue to drift further apart? Find out in the series everyone is talking about by one of the most acclaimed creative teams in comics!”

Feel free to express you excitement for these books or to talk about how much you’re enjoying reading them, but please don’t begin any spoiler conversations until Saturday, 09/05/2020.

Another really solid issue. Alanna is the most interesting character. Olivia Munn’s got to play her in the movie.

I never understand the problem people had with Tom King because I always find his books to be really interesting and really good in epic storytelling. Strange adventures continues to be a really good read with each issue getting better.

Completely agree! The only thing he’s ever written that I haven’t loved is Heroes in Crisis!

Honestly if I was Tom King at the time, I would have focus more on Wally West and would have him as the sole survivor of the sanctuary attack and try to solve the murders with the trinity until near the end where the truth is revealed and that big Keyser Söze twist would have been shocking as it was tragic for the characters. Booster gold and Harley Quinn shenanigans really brought the story down and if I didn’t know better I would have called it an editorial mandate to have these characters in the story.

editoral mandate to have these characters in the story.

Even though Heroes In Crisis is one of my favorite stories I 100% agree with this. More than anything else it was totally Harley’s Coming Out Story with her as the “Hero.”

The title may be Strange Adventures but Mr. Terrific has stolen the show in my opinion. He’s been cool, tough, smart and seems to be running the show. I’m looking forward to issue #6 because you know he’s bringing trouble back with him from Rann.

This series took a while to grab me but it grabbed me and Tom King is spinning a compelling yarn with his simultaneous stories in two different times and places.