It was available before St Patrick’s day and disappeared suddenly. All I want to do is finish reading the series. Lol!

When that came out here, there was controversy among the community about the book considering that the writer was recently tried and convicted for possessing and distributing child pornography, so…that’s probably why they haven’t brought it back.

Don’t expect it to EVER show up. I respect the decision and just think about the other awesome series!

The why’s are open to speculation, but Emerald Dawn I & II came out on here then was removed in about 24 hours. Obviously no matter how much people want to complain about the rotation, clearly DCU didn’t put 12 issues up with the intention to remove them in one day, there would be no point to that. But when people asked we were told pretty straight forward it was taken down and won’t come back.

We could speculate why and there is an obvious reason that would seem to be the most likely guess, but that is still all it would be.

But eeither way for whatever reason DCU clearly isn’t bringing it back up. And I get some people might be a bit disappointed, but there are currently more comics up then I would wager 99% if not 100% of us could ever hope to read all of. So I am willing to accept that it’s just “one of those things”. In truth knowing what I know now would make it hard for me to enjoy it at this point regardless of if it ever came up, especially since we are hardly hurting for good comics to read anymore.

Dr. Manhattan or the Anti-Monitor hit reality and erased them from existence.
Keep the rest of your comics safe. No telling what they may erase again in 20 years.

@dan I can confirm that I’ve been told by Applejack it was because of what you know that it’s never coming.

Ah ok, thanks for all the replies. Not a big deal, I was just wondering why it never came back. Lots of other stories to read now anyway.

It’s worth noting that the single issues and all of the writer’s regular series run (including the Death of Superman tie in) were also pulled from ComiXology.

I’m a little surprised since it is on Comixology, but at the same time it’s not like the DC branding could take too many more hits either after that Batman Black Label #1 fun that never had a second printing, yooooooooo.

Oh, and not to rock anyone’s world view, but concerning the theory that all of this guy’s stuff is remnoved from DCU, take a gander at this screenshot from DCU I just snapped… 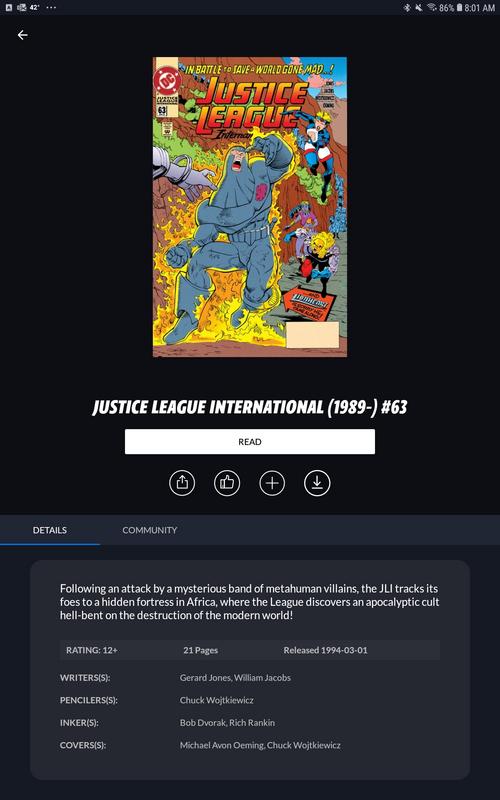 Yeah, there’s quite a few of his stories on here. Flash 50th anniversary, for example.

I think it’s ridiculous. The guy’s a creep and no one’s arguing that. If DC wants to make a statement about that, go for it. Seriously. Actually come out and make a statement.

But put the stories back up.

If they want to make a statement, just strike his name off everything.

I really think it SHOULD be here for archival purposes, but should not be celebrated or featured in any way. Let people seek it out on their own.

I agree @HubCityQuestion.
It’s not fair to the artists, or to the readers who want to have an uninterrupted reading of the comics.

I actually feel worse for the artists and others who were involved with his work then the fans because now their work is tainted by his actions as well. There will be some people out there that will play the ‘guilt by association’ card regardless of whether or not they even knew about this.

I feel bad for the other writers and artist involved because it cuts into their royalties too. Not saying DCU did the wrong thing but it’s a shame it has to go down like that.

Fortunately, it doesn’t have to go down like that. DC has the option to put the comics back on the service. I don’t know how long comic writers get royalty checks. But I guarantee you, nobody’s getting rich here. As much as I want these comics, they’re simply not in massive demand. So, what’s the real problem here?

If DC’s worried about simply having the guy’s name on stuff, then DC needs to remove the rest of his works.

Its quite likely that there are specific royalty issues with these books in particular since every contract is different.

You know, I wish we’d get an official response with the reason. I completely understand that it’s not appropriate for Applejack to speak for DC on legal matters. She’d probably get fired, and that’d be bad. But for all we know, this has nothing to do with any of the guesses that we’ve had. There might be a completely reasonable answer.

I can’t believe it’s a money issue. And if it was an issue with the writer, that doesn’t explain why he’s got other stories still on the site. So that doesn’t make sense either. I seriously doubt it’s a royalty problem with these specific stories, because Green Lantern isn’t a creator owned title.

Personally, I think some middle-manager made a decision that doesn’t make sense, and we’re simply stuck with it. But, that’s just aanother guess…

@harley: I think you’ve probably hit the nail on the head there. I do think that they need to be consistent with this though. If DC removes one work ( in this case Emerald Dawn) from all services because of the writer’s actions then they need to be sure to remove EVERY other work by him as well otherwise its not effective.