Stephanie Williams: The Future Has Always Been in Nubia's Hands 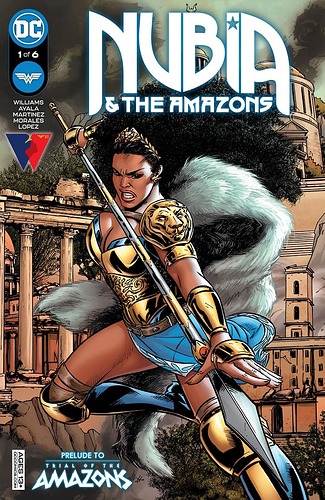 Nubia is one of those characters I remember hearing a lot about when I was younger and just getting into comics. Unlike Storm, Vixen, Monica Rambeau, Misty Knight, Amanda Waller, Bumblebee and Rocket, I soon learned she didn’t have nearly as many appearances in comics as I assumed, given how sizable her fan base was—still is and growing. I would say that I was shocked when I learned this, but that wouldn’t be true. The thing about Black folks and the characters they love—especially in comics—is that we tend to breathe life into them in ways that make these characters bigger than what they are, regardless of how little there is canonically for them.

I didn’t get around to reading any of the handful of appearances Nubia had until my twenties. Comics aren’t cheap, and older comics can be pretty hard to find and expensive. Spoiler alert, there was a time when it was challenging to get a hold of certain older comics from the Golden, Silver, and even Bronze Ages, at least before scans of them became readily available online. Still, you had to risk giving your computer a nasty virus to read them. (I’m so thankful apps like DC UNIVERSE INFINITE exist for these reasons and more.)

The moment I read Nubia’s very first appearance in Wonder Woman #204 , I immediately understood how she managed to garner so much love and adoration with so little page time. How could you not love this character who showed up with armor and silk press ready to battle for the Wonder Woman title from whoever stood in her way? (That just so happened to be Diana Prince of Themyscira.) It was confidence and audacity for me. She pretty much invited herself into someone’s home, kept her shoes on, and sat on their couch with muddy feet. Rick James would be proud.

To read Stephanie William’s full thoughts on Nubia, head over to DC Comics!

Are you ready for the 1st issue of Nubia & The Amazons? Let us know in the comments!