Static Season One: Catching Up with Vita Ayala 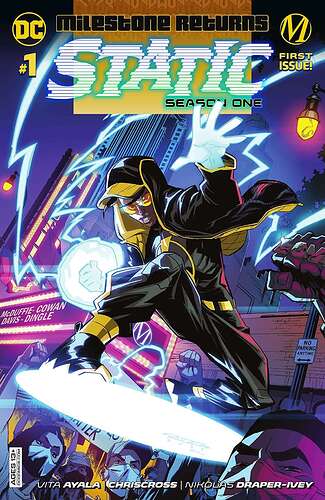 The debut of Milestone’s Static #1 was almost 28 years ago to the day. Created by the co-founders of Milestone, Dwayne McDuffie, Dennis Cowan, Michael Davis, and Derek T. Dingle, and drawn by the late John Paul Leon, the character of Virgil Ovid Hawkins would go on to be one of the most impactful characters in comics in the ’90s. The comic book series inspired Static Shock, the animated series that ran on the WB Network’s kids block starting in 2000 for four seasons. The show (also produced and written by McDuffie) influenced an entire generation who grew up with Virgil (voiced by the legendary Phil Lamarr) in their living rooms.

To say the return of Virgil Hawkins to the comic book world was highly anticipated is an understatement. Of course, bringing back beloved characters from a favorite franchise is always a daunting task. But with the pressure of a pandemic, worldwide protest movements, and new online audiences, rebooting was probably one of Milestone’s most daunting tasks.

To read the full interview with Vita Ayala, head on over to Syfy!

Are you excited for Static Season One #2 to arrive on July 27? Let us know in the comments!

I’m a bit surprised at how much I’m enjoying STATIC, because teen characters aren’t usually something that I’m interested in. I have to chalk it up to Nikolas Draper-Ivey’s art, that was always the selling point for me this…

Speaking of which, a recent interview with him ahead of issue #4:

Static: Season One artist Nikolas Draper-Ivey chatted with Nerdist about how anime like Akira have inspired his fan fave DC Comics run!

While Draper-Ivey grew up with these stories and still loves them, he had to take a step back when it came to how they influence his own work. “It’s kind of funny, because I love manga and anime. But I found that if I was gonna make my stuff stand out and let my anime and manga influences come through, but still have my own voice, I had to not look at anime and manga,” the artist laughed. “A lot of mangaka are not sitting around reading manga all day. They’re watching movies, they’re looking at different mediums. So I let that trickle into my work and then I was able to fuse it together.”

Bringing those differing influences to Static came with one clear vision. “I knew right away I wanted it to feel cinematic, I wanted it to feel like a movie,” Draper-Ivey explained. But he also wanted to make sure it felt unique and unlike any other Big Two series. “I didn’t want to approach Static just like an American comic book. And I think in issue four you’re really going to get some panels that showcase that.” He also looked to anime studios like Studio 4°C and MAPPA. “I wanted to paint certain panels to look like keyframes of animation. Sometimes I wanted it to look like, ‘Oh, this is a screenshot of an anime.’”

It’s a dynamic visual choice that shines through, giving Static a wholly unique look. And one of the places that Draper-Ivey’s most obvious anime influence comes in is the vibrant fashion and character designs. But for the artist it’s all about authenticity and creating an international look from real life. He said, “I have a lot of magazines from Japan. There’s a store in New York called Kinokuniya. I’ll go there and kind of look at the fashion trends that are in Japan, but then I also combine it with the trends I see here in New York. I try to fuse that together to create something that feels kind of futuristic but also has international appeal.”

American comics I only buy digitally, but the few manga titles that I read I buy in print and Kinokuniya has everything that I want – straight from Japan; I don’t even have to use Amazon Japan.

Draper-Ivey was keen to make sure that he brought that style and influence to Static . He also wanted to subvert the idea that American comics somehow aren’t aware of anime and manga and its massive influence. His cover playing on the famed Akira poster leans into that wish. “The Akira cover came to me while I was biking,” he recalled. “I was listening to the Kaneda theme. And I was thinking, ‘How could I do something with Akira and Static ?’ I got off my bike and I saw the cracked ground and I saw the manhole cover and I was like, ‘Oh my god!’ and it almost seemed too easy.”

Rushing home to bring his design to life, Draper-Ivey wanted to make sure the piece was as close to Otomo’s work as possible. That’s what inspired the painted style and gave the cover its life. It was also important to Draper-Ivey that he satisfied fans of Static with a little nostalgic hook. He explained, “Even though he has a different costume now, I went with the one from the cartoon. That’s the one a lot of people know.”

With issue four headed to shelves and Static: Season One in full swing, Draper-Ivey also has bigger dreams for Virgil. And once again it all comes back to anime and the films he loves so much. “I really want Warner Brothers or whoever to—if they want to really do something cool—they should make an Animatrix style Milestone movie!” Now that’s something we’d really want to see!

Yes, they really should do an Animatrix style Milestone movie.

Anyway, I guess issue #4 of STATIC will be here on DC Universe Infinite on September 21st?