If Static: Season One creators Vita Ayala and Nikolas Draper-Ivey are daunted at all by the burden of expectations that come with the relaunch of a classic character, they certainly don’t show it. The first issue of the new series premieres today and features an all-new incarnation of the iconic Milestone superhero, one that reimagines Virgil Hawkins in a contemporary setting. 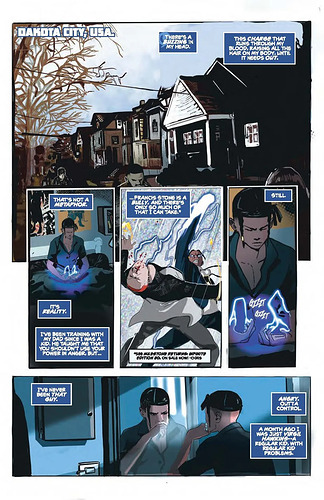 “I wanted to kind of take him and put him into our context,” Ayala told Polygon during a roundtable interview last weekend. “What does it mean to be that kind of character: slightly annoying, but in a cute way; a really, really smart black kid in 2021; how do you survive and keep that optimism and keep that kind of heroic nature?” For Ayala, the quality that defines Virgil’s heroism is his ability to see the havoc wrought in the wake of the Big Bang, be terrified by it, and nonetheless resolve to make things better for his community. “It’s not this higher order, I’m gonna save the Earth , it’s like, I’m gonna save my block . That was important to me, to bring that forward into the context of a more contemporary time.”

“We’re working very hard to give the fans something that is familiar,” said Draper-Ivey, colorist and character designer on the series, about the challenge of bringing Static to a new generation of comic readers. “But then there comes a point where you realize that you are telling a different story and doing your own thing, y’know, you’re not your predecessors. You have to have respect for them but in the end, ultimately, you have to try to make it your own. So I think that’s what we’re trying to focus on.”

To read the full interview with the new creators of Static, head over to Polygon!

Are you excited for the return of Milestone Comics? Let us know in the comments!

And a CBR interview too: Static Season One: Ayala & Draper-Ivey Break Down Their Milestone...

And I guess an okay trailer…

Now bring on ICON AND ROCKET.

Are you excited for the return of Milestone Comics? Let us know in the comments!

I think that this says it all.

these all look sooooo goooooodd!!! I’m so hyped!!!

I don’t think I had Static on my pull list and they figured I would want a copy. There are two things I took away from this. First, I love how they know what I will want. 2. Adam and Candace at my comic shop are excellent.

I am pretty excited to sit down and read this book once I get the time.

I loved issue #1 of Static: Season One and thought the new take on the character(s) for Milestone was really smart. I’m sure it’ll rub some people the wrong way and the portrayal of police officers is not a glowing review but it’s true to the events of the past 16 months, unfortunately, and it gave the series a “torn from the headlines” feel that most books don’t have.

I started with the Milestone Returns: Infinite Edition #1 and liked the way it set up all the characters. I think this has the potential to be the best series of books in the DC catalog for 2021. Looking forward to where Static: Season One goes from here and seeing the return of Icon & Rocket and Hardware.

Are you excited for the return of Milestone Comics?

I will never forget sitting down as a kid and stumbling upon the Static show as I was scrolling through channels. I fell in love at the time but ended up partially forgetting about it until recently when I popped it on again for the first time in a while. I’m pumped for all the Static content that’s heading our way, as well as all the return of so many Milestone characters!