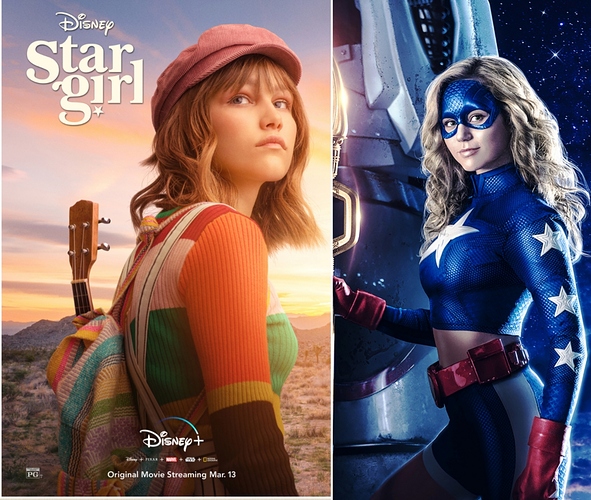 A movie about a high school girl falling in love doesn’t interest me.

Really this just tells me Disney can’t come up with ideas anymore. Who’s God-given name is Stargirl? That is blatant theft.

Given the results of this partially completed, totally unbiased poll, it seems evident that DC’s Stargirl is better

this is our chance To get back at Marvel/Disney For taking the name Captain marvel. dc sue sue sue sue!!!

Yeah, I’m not entirely sure Disney has ever had an original thought other than Mickey and Crew.

Knowing Disney, that’s based on the book. I read it in seventh grade. It was horrible.

There was a day called “Stargirl Day.” Because the book is about an eccentric, “weird” girl. She dresses differently and keeps a lizard or something in her pocket. Wait, no, I remember it being a rodent of some kind, not a reptile.
Anyway, you had to dress weirdly for school. This was super subjective, because you know, what is weird? I knew plenty of people who didn’t need “Stargirl Day” to be weird. So one dude dies his hair pink or something and got made fun of. This was my brother’s seventh grade year, not mine. He says that the next day all the girls and some guys showed up to school with colored hair.
He was amazed that someone got made fun of on “Stargirl Day” considering every one was in the loop about it. If your friend saw you dressed oddly, they’d laugh and say “Stargirl Day?” And you’d just have to nod.

I know that the Stargirl novel came out in like 2008, but you can’t convince me this isn’t sabotage. Google Stargirl now, and the Disney thing comes up!

I remember when IMDB had the Disney+ poster showing up on the DC Universe series as their main image/poster (they removed it same day lol)… This was the 1st time I had heard of the other Stargirl. I was kind of baffled that it existed in the 1st place…

I’m watching the Disney one right now, and it’s ok.

That bad huh? I thought about watching it, maybe I better not.

I wouldn’t, it’s kind of childish…

I’ll take your word for it.

I’m excited for both. The film is an adaptation of a YA Novel written by Jerry Spinelli in 2000. The book was beloved apparently despite the Manic Pixie Dream Girl trope because it focused on self-acceptance and allowing kids to be kids. The film is directed by Julia Hart (who did the indie superhero western, FAST COLOR), and the screenplay is by Kristin Hahn, Jordan Horowitz, and Hart. I think Spinelli serves as a co-producer. They made necessary changes, as all adaptations do, and it works best if you haven’t read the book. Having women in charge of the writing and directing and adapting it for the moderns times were some of the better changes.

In a platform centered on DC, of course, the DC superhero character is going to be the one everyone (on here) is the most excited for. I don’t think the name “Stargirl” is trademarked like “Captain Marvel” or is anyone’s intellectual property, so I don’t think there’s a copycat situation especially if you look up how often people call themselves “Stargirl” with no reference to either project.

They’re both coming of age projects focusing on young teenaged white girls in high school with women behind the scenes as much as in front (Johns has Melissa Carter as a co-showrunner, and there were more women writing season one than men). I’m all for both projects. They’re both important.

To paraphrase Randall from Clerks 2:

“There’s only one Stargirl, and she’s not on Disney+”.

This is kinda funny to me because I read the Jerry Spinelli book back in high school as part of our curriculum.

DC for the win!