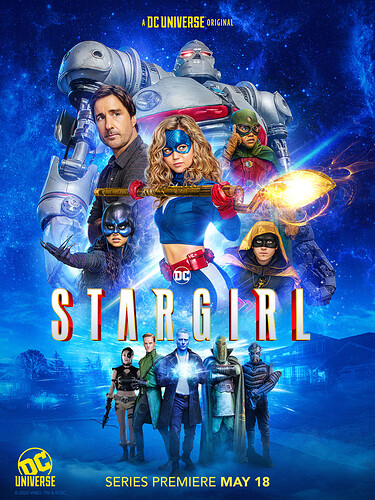 I hope they finally do a crossover with The Flash as they originally planned!

Marked already on my calendar.

@Mae It is confirmed that John Wesley Shipp will be in the show as Jay.

Interesting! So an actual connection to the show, but would be great to have Barry show up.

Well Stargirl and Vibe were on a team together in the comics that battled a team with Barry. Time to build up for Forever Evil.

can’t wait. And nice too gives me a nice gap to catch up on some other shows in the summer.

Of course what other show am I suppose to watch

Great news, I just found out that Stargirl has been renewed for 3rd season!

As was previously stated by me elsewhere, JWS playing Jay Garrick is not a crossover because he’s going to be playing the post-Crisis Stargirl/Earth-2 version of the character, which is a brand-new role for him and doesn’t do anything other than reconfirm that Stargirl exists alongside the Arrowverse as was already established by CoIE.

In other news, Stargirl has been renewed for Season 3!

We know it’s not an actual crossover, but the fact that JWS is reprising his role on an alternate earth is still a connection nonetheless. Maybe it could help pave the way for an actual Arrowverse crossover or maybe it’ll just be a fun easter egg in the casting. Either way, we can still speculate until we know for sure

Or it means JWS takes over as the Flash of the DCW verse.

JWS playing the post-Crisis Earth-2 version of Jay Garrick is not a role reprisal.

I’m stoked, such a fun show. Gonna give season 1 a rewatch closer to the premier

You can still reprise a role even if it’s in a different continuity. It’s the same character in general, just a new version in this universe

It doesn’t quite seem like the same kinda thing, though I guess the possibility’s still there. We still don’t actually know what happened to Jay after Crisis or if he even exists on Earth-Prime, so maybe this could be Earth-Prime Jay hopping to a different universe? I’m still pretty sure it’s gonna be the Jay that was always on Earth-2, but I guess we won’t know 100% until the fall