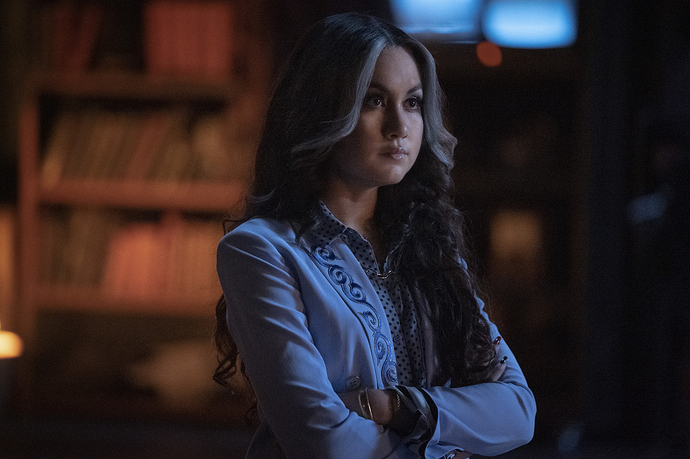 With an episode title like, “Shiv Part 1” you know we’re about to get a ton of Shiv and, boy, did this live up to the title!

Cindy is revealed to be Dragon King’s daughter - who says he provided her with her superpowers to keep the school in check.

Cindy is responsible for watching over Henry as his mind control powers are needed to power Dragon King’s machine. Cindy doesn’t believe Henry has his dad’s powers, but Henry’s psychic powers begin to show themselves.

After catching Courtney on the security cameras in the secret facility, Cindy reveals herself to be Shiv!

But that’s not all! We finally get to find out exactly who the mysterious janitor is!

A few things that stuck out this week to me.

They do a great job at writing Cindy to be the biggest B of all time.

Brainwave Jr coming into his powers.

Stop teasing me with Grundy and give him to me already. More Grundy!!!

Courtney is really proud she can take out a bunch of buckets sitting there with no powers. Yea court you ready to take on the entire ISA by yourself now.

Mike has some depth to him spilling some emotions to Courtney.

Sport masters is stupid everyone knows when you’re at any sport event calories don’t count.

I enjoyed pats quick breakdown of the ISA

I’m not gonna lie, when Shiv’s face regenerated I was like “okayyyyy” that was awesome. Can we please announce already that we’ll get a season 2? Like a DC Universe season 2 and NOT make this a CW show…

My thoughts on episode:

Overall not a bad episode but I always hate two parters so hopefully worth it.

Wow. What a great fight scene. I think Courtney’s gonna be a little less “gung ho” about going after the ISA from now on. Plus Cindy had to hear Pat yelling through the halls, so I think the secret is out. What and how she chooses to use that info is the question.

Is “Janitor Justin” going to have a talk with Pat, now that he knows he’s in town? And alive?
Every week this show has me on the edge of my seat, babbling on this thread, and counting the days until the next episode!
I hope Mike gets involved somehow. I feel bad for the kid.
It went by so quickly this week! I’m glad I’ve got one more Doom Patrol to watch tonight, my superhero itch still needs scratchin’!!

I didn’t actually spot many Easter Eggs but nonetheless the episode was great! Ok so I think that it’s completely ok to say now that the janitor is Shining Knight! I was surprised that that Cameron asked Courtney to the dance but maybe I’m just disappointed because on my huge hope that Air Wave shows up I was hoping there would be a Stargirl/Air Wave romance but I think that it will be interesting seeing the dance. Grundy! The fight was good and I like the Shiv costume. Can’t wait for Part 2!

I didn’t read S.T.A.R /Stripes or anything after G. Johns initial JSA run, so being an ancient collector/reader I had to figure out who Justin was. It should be apparent to old- timers now.

I feel ya, Billy! I started collecting/reading in the late 70s. It’s a love that has never left me, unlike so many others…

The scene with Cindy and her stepmom…yikes!

Next week is gonna be ridiculous!!! Does Cindy know Courtney is Stargirl? If so the tension is omg!! Is Icicle gonna try to hook up with Barbara? Stargirl’s recovery, like Mike can’t be left out of the loop now can he?? Which Barbara is out of town so that’s not much of a worry but… This show on another level ‘in a good way’

That was so mean and cruel of Cindy! Wonder if the Stepmother is also afraid of her husband?!
It was great seeing Larry the Crusher commenting on what’s Pat getting at the snack bar!

Fun opening now the song is stuck in my head. Nice to see the training. And the random slow mo walk in the school. Pat explanation and dummies were fun. But Stargirl getting ahead of herself. Enjoyed the similarities shown between her an Shiv. Also the driving lies. They pile up.

Shiv man even mean to her friends. Poor Henry (getting power though nice. But to cheat not so nice). The chem scene was interesting. Didn’t think they’d get along.

A look into shivs life. Poor step mom. Dragon King caring in his weird way. Grundy locked up. (Soon). The ISA deciding what to do. Like how they all don’t want there kids to be villains. But man her life looked ruff a bit. All she want is someone to be there for her. Felt bad for Justin when she was mean to him.

Barbara going with icicle on a business adventure. Wonder what will happen.

They love talk with the Icicles was nice. A good father and son moment.

The big game. Courtney going out with Cameron. What will happen there? Mike getting jealous wonder if he’ll find out. Sportsmaster still trying to whip Pat into shape was great. They Shiv fight was awesome™️. She looked great in her suit. They back and forth fight was great. The face burn was amazing. She got ahead of herself both of them. Justin with the the save. HUZZAH. Nice the staff went to find Pat. But pat shouting her name not good.

I enjoyed this part one of two. Haven’t scene a good ol two parter in a while.

What will happen next? Where did the Fiddler go? Will the team show up? Did Shiv hear Stargirl’s identity? Will Mike find out his Dad and Step sister are heroes? Will a Shinning Knight return? All this an more next time on Stargirl.

Pat really comes off as a guy who doesnt really know what he is doing, at least out of S.T.R.I.P.E. Courtney was wrong for overstepping on his training session but she was right in that he didn’t bring any new info that the team already didn’t know. I also thought the team over reacted, yes courtney was showing off but it was literally a metal can over a mop. Kind felt like forced drama but it makes courtney feel like she can only rely on the staff.

Beth is a real fun character. I just wish she wasn’t becoming best friend with Chuck. She needs to grow closer to her human friends not the goggles. Also what kind of training was Pat going to teach her. I didn’t think she wanted to be a fighter. Her parents really expect her to make lunch every day but then ask why she doesn’t hang out with friends at school.

Shiv is over powered. She has a staff that blows fire, regeneration and super strength. Too bad for the ISA they cant control her and she is not stable. Looks like she killed her “mom”.

Courtney doesnt even try to console Mike when Camerom comes along. We have to remember courtney is a kid herself.

The fight was good. I thought the fight from episode 6 was alot better but this was still cool and had its moments. I especially liked when Courtney used the staff to step off of and spear Shiv into the gym. That got me pretty hyped. There was an awkward pause when Shiv brings out her knives, could have helped to have Courtney swing her staff or something to signify they were both ready for round 2.

Shinning Knight. I am interested to see where his character goes.

I don’t see how Shiv would fail to figure out Courtney is Stargirl (at least after she’s had a minute to catch her breath and think things through). But likewise I don’t she how Stargirl wouldn’t recognize Cindy immediately, given her distinctive hair and the fact Shiv wasn’t even wearing a mask!! Quite the sticky wicket…

Stargirl is getting really good!! There needs to be a season 2!! I know this is about the JSA, but what about other members of the 7 Soldiers of Victory? We know of Star Spangled Kid, Stripesy, and Shining Knight. I can’t wait for part 2 of Shiv. Courtney’s not dead just seriously injured. She screwed up big time.

I don’t wish harm on Courtney, but I’m glad that she’s finally getting some sense whacked into her courtesy of Cindy.

Dude that fight scene at the end was great! Great eps., great show so far.