Once again, we had an amazing episode! We got a better look at S.T.R.I.P.E. and Pat, then got to soar over Blue Valley with Courtney on S.T.R.I.P.E.’s back.

This episode had so much - what else could we ask for? Well, how about a costume reveal!

So many things divulged with even more questions left unanswered!

Hello everybody, Spoiler alert, I really enjoyed this episode alot, my favorite scene is when Pat was trying out S.T.R.I.P.E as a training, there were some funny moments in that scene. I also crack up when Courtney ruin a few sewing machines when making her Stargirl costume. After watching the first episode 5 time, this episode felt like a sequel to a movie, it was perfect, love every bit of it and can’t wait to watch episode 3 next week!

I’m wondering if that whole scene will be dropped from the CW broadcast, since last week they dropped scenes that weren’t critical to the plot.

I’m clearly going to be watching this at midnight as soon as it drops every week. I love it.

Okay, GREAT EPISODE! I loved how Stargirl was certain what to do, but very unclear about how to do it – but the staff knew. I like the consistency with the comics, but I think the history of the staff is going to go its own way in this version. I think that’s a good thing.

I’m beginning to see how the young JSA is forming. I like the slow presentation of the New America project (which I think is going to feel really different this political year than in 1940 or in 1999 when Geoff Johns recreated it).

I also liked that we got to see (in the underground lair) an equivalent of the JSA table photo in that background painting behind their conference table. I notice the IJSA table is bigger than the JSA one. I also note that everyone in the IJSA waiting is still alive.

What was the “girl’s gotta do” song used when she made the costume? Catchy, good, but I don’t know it.

Another good episode. Liked seeing more of the Injustice Society hopefully we get to see more of Solomon Grundy. Looking forward to see how the new JSA comes to be.

Loved this episode!
Some great tense scenes in this one especially the gymnasium scene.
The one-shot in the gymnasium was also really well done.

I didn’t expect Brainwave to find Courtney so soon and have another battle. Really subverted my expectations (in the good way). That actor’s one of my favorites (gives such a tense presence). I’m curious if his son will develop powers in this show.

This episode has some really funny scenes too. Great mix of all things.

S.T.R.I.P.E was awesome. The montage both of them were hilarious. And Buddy was adorable the whole episode.

A fun breakfast scene with the family with the classic I fell excuses. Those pancakes did look good. The Goly Gee but was fun.

Seeing the wizard reformed was nice. Definitely think he help our heroes I. There time of need.

Brainwave and his son trying to se if he has powers. I can definitely see then coming now. With Brain wave defeated

I enjoyed the PTA. A fun scene wee you get to see most of the main cast and other characters appearing in the series. That hallway scene between Brainwave and Stargirl was awesome. The villain monologue and demands scene like that are always great.

And Pat putting his foot down was great. Upped the intensity in the scene. Definitely felt like the finale scene and were only at episode two. A very awesome fight. Stargirl suited up in action was awesome. Now that he’s comaed I definitely scene Brainwave jr. coming in.

Pat not wanting to do this but Stargirl’s going to push him. Fun way they came up with the name. Nice Ted Knight reference. But I still don’t think Starman is her dad. But who knows what they are going to do.

The Icicle scene was great. Can’t wait until they use Grundy. But looks like Icicle and Gambler are ready to start the injustice society again. 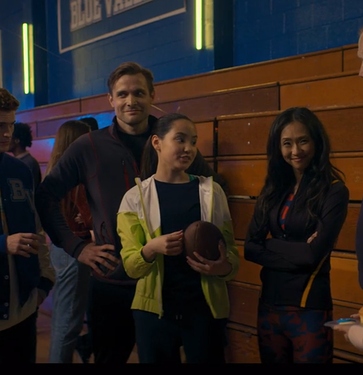 Great episode. Please don’t make we wait till like episode 11 for some grundy action. One thing I noticed when I was researching cast is the principles son that she raves about. I don’t know if this is supposed to be an eastern egg or if anything will come from the character

she mentions how he’s going to be a great musician and when I looked into the cast and searched the principles name her son comes up who I guess eventually turns into the fiddler, but it seems like everyone in that highschool turns into someone down the line 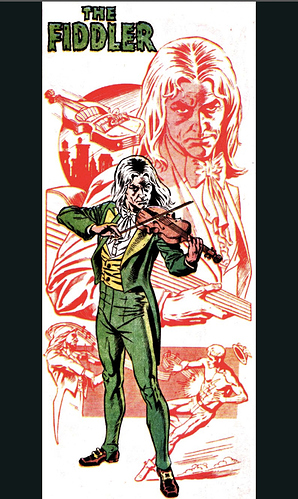 The show really needs to do more with Barbara and Mike or else kill both characters off to up the tension.

Christopher James Baker is a Series Regular, and so unless he’s just going to show up in flashbacks, Brainwave Sr isn’t defeated yet.

After spending the entire episode rightfully trying to be the adult, Pat capitulated to Courtney taking on the identity of Stargirl rather quickly, which felt ‘off’.

We know the elder Dr. Chapel worked with Brainwave Sr, but I’m trying to figure out if her husband is the guy who told Barbara that Sharpe can be tough.

Doing a role call of ‘junior’ ISA characters, we’ve got Henry Jr, Artemis, Cindy Burman, Joey Zarick, and Cameron Mahkent (whom we didn’t see this episode), and although it doesn’t look like any of them know about their parents’ villainous activities right now, I don’t expect that to still be the case by the end of the season (and we already know it won’t be for Cindy).

I think we found out this episode why Rick Tyler was relegated to the “losers” table and was in detention with Courtney in the Pilot, and I’m liking the Batman parallel they 're setting up for him becoming the new Hourman, not only because I love the Batman character, but also because of the fact that it alludes to the second New 52 Earth 2 Batman (Thomas Wayne) basically being an Hourman equivalent.

Courtney made fun of Pat’s codename in the Pilot, but she’s not much better at coming up with alter ego monikers herself (Subatomic Tactical Robot Internet Pat Enhancer, really?).

I was convinced in the Pilot that Pat was protesting a little too much about Starman being Courtney’s dad because he knew something more than he was,letting on, so it’s a little less interesting that he actually genuinely believed what he was saying.

Yolanda was wasted this episode, and I’m surprised we didn’t see more of Beth or see Rick at all.

Like I said at the start, this was a great episode, and I can’t wait until next week.

Not exactly sure what it is but this show is quickly rising through the ranks of my favorite shows of all time. Somehow, I think Mike might be my favorite character so far, and Pat is a close second.

Does anybody have any idea as to who exactly the Colonel Sanders dude is supposed to be? I looked it up but I can’t put it together.

the Injustice Society member the Gambler.

Very fitting that he’s in charge of the Injustice Society’s money in their American Dream front. Wonder if we’ll be seeing his granddaughter Hazard as a student in Blue Valley High School.

@TaimurDar I’d mark that second part as a spoiler just for people who want to discover characters as the show reveals them.

Did that for the janitor in episode 1, but did not think the CFO identity as potential spoiler.

People who wondered why Pat would move his family to Blue Valley if there were villains there get their answer. He didn’t know!

Also, Ted Knight fans should be very pleased. Hoping we see him appear in later episodes and if we’re lucky his son Jack!

You can tell how much love is going into these episodes. If all series would have the creative passion that Geoff brings to the table here, imagine where we could be.

I cannot celebrate this series enough. Best live action all categories to come out of DC. This is comics brought to life. This what comics are about.

Great second episode. Kept the punches going and made you want to know more and see what happens.

I am curious to see what they do with the wizard especially since it looks like he doesnt want to fight anymore.

Will echo others on excitement for Ted Knight but the question is did he die with the rest of the JSA or something else.

In that picture of the JSA I was disappointed that Soloman Grundy was not in it. That or I missed him.

S.T.R.I.P.E. better get some upgrades because right now I feel like that robot armor is 1 hit from falling to pieces.

I think the biggest plot hole I had in this is why didnt Brainwave contact the rest of the ISA to let them know that he figured out who stargirl was or leave a note? But then again bad guys are not always the brightest when it comes to these things. Be interesting to see what things he was able to get out of Chloe’s mind when and if he comes back.

Final final comment. I am hoping that if I watch this episode again on the CW they do a better job of inserting commercials. They did a horrible job with the first one to the point it was unwatchable in my opioion and killed a lot of the suspense that was building up in scenes.

@morph147.91615 I think Solomon Grundy was the giant blob in the back of the picture but they didn’t go wide enough to see him entirely. I could be wrong though.

I am really enjoying the series so far. They are putting effort into making this series great. Can’t wait to watch episode 3.

Pretty solid second episode. The vast majority of nitpicking I have when it comes to this episode are simply connected to the fact that this is at it’s heart more of a teen show than the rest of the DCU original shows. Which is totally understandable since this was produced to also show on the CW.
While I haven’t read any of the Stargirl comics I’m still catching plenty of DC easter eggs that make watching this all the more fun. Can’t wait for the next episode.