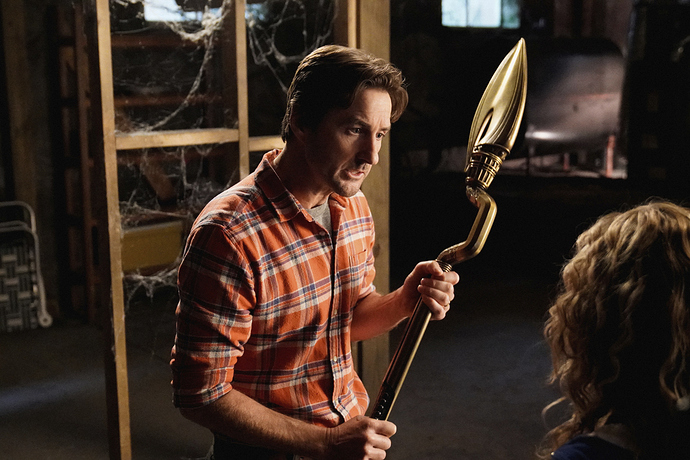 Well, this is what we call a Premiere episode! We saw the Justice Society square off with the Injustice Society, in the same town Courtney Whitmore moves to years later.

We watched as Courtney was chosen by the Cosmic Staff, learned about Starman, and had her first battle with Brainwave!

Was that MMMbop in beginning playing? And I enjoyed the first episode, I can’t wait to see more Solomon Grundy. I only wish they would have gone over everyone in the JSA photo. There were a few characters I couldn’t recognize, maybe a quick line with Courtney saying who are the rest of these people while she was looking at the photo and Pat just doing a quick run down.

Sure I’m not the only one who noticed Justin the janitor from the original Stars and S.T.R.I.P.E. comic series makes an appearance. 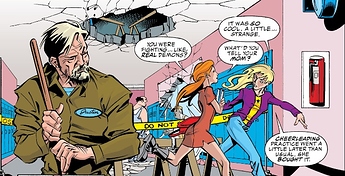 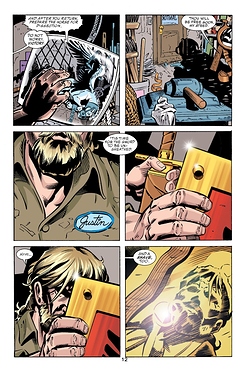 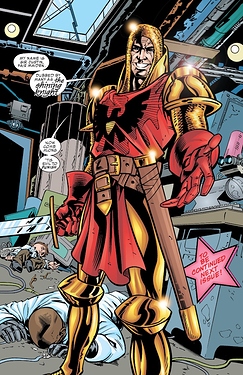 oh man, I really enjoyed that! and I can not wait for more! that’s all I have to say, I’m speechless.

I loved it! As a Jsa fan I thought the first episode was perfect as an introduction to the jsa and Stargirl!

Looks like DC has another winner. Hoping to see flash backs to the JSA as well as the new takes the ads are showing us. Looks great. Can’t wait until episode2.

This show is gonna be something special folks. Oh my that pilot was so good!!!

I really enjoyed that. And noticed the Justin cameo too, if that was Justin. But definitely going somewhere with him so very hopeful.

As for the rest I really enjoyed the episode Brec Bassinger played Courtney perfectly, and while Luke Wilson played Pat a bit differently then he read in the comics (at least to me) he gave a great performance and he and Brec have great chemistry. Also loved that while I am guessing from what we know the two will become close a bit faster then they did in the comics, that their earlier almost adversarial relationship was not ignored in this adaption.

Was great to see Amy Smart on this show, I have been a big fan of hers since The Butterfly Effect, and while she is clearly going to be a supporting character I love I am getting a chance to see her weekly, hopefully for years to come.

Blue Valley had the timeless feel to it that it did in the comics, and the vintage music sprinkled in helped add to it.

Michael Dugan was a bit of a puzzling decision. The actor did fine with what he got but it seems weird they aged him down and put him with them in the beginning. I mean as the show goes on maybe he will justify the decision, but while I get most of the changes they made that one seems kind of random.

Like that we got a look at S.T,R.I.P.E. in the end so we didn’t have to wait. He looks even better then in the comics and it is so cool we are getting to see him in the show. I have a feeling even with the better budget this show clearly has then most superhero TV shows that they won’t be able to feature the suit in every episode. But I will enjoy what they give us because when I heard they were making a Stargirl show I assumed that there was no way they could add S.T.R.I.P.E.

Too soon to tell on the villains and Courtney’s “friends” but first impressions were good.

Cindy Burman also seems perfectly cast and glad they included the white streaks in her hair. Not that it take away from the character if they didn’t keep that detail, they changed worse, but still enjoyed they didn’t change that.

No real complaints, I was sorry that Green Lantern was not in the episode beyond the picture. Not shocking, I kind of am surprised we got him and Flash in the picture. But in the trailer Hourman falling looked so much like Green Lantern I thought we would at least get a brief glimpse. Have a feeling at least season 1 we won’t see them besides the picture or hear their names. But glad we got the picture.

Kind of liked that Starman was a bit of a jerk, I don’t know why I just found it funny.

So much I could go on but better stop here. lol. But yeah it was a good show just like I knew it would be, I think this show and the character will do great things and I am here for it.

It had a great storytelling and alot of great action, this episode pretty much based on Stars and S.T.R.I.P.E #1. I was hoping Courtney would call Pat Stripey, and she did!

Loved that Starman had humor with Pat - “No, not you!” That was a great line and fun moment.

Seeing Solomon Grundy in action was fantastic, even if it was too brief.

Solid first episode that definitely makes me want to watch more. I liked the quick backstory on Starman, loved the Joel McHale cameo, and the discovery of Stargirl, Stripey and the villains of Blue Valley are all nicely in place.

I hope that, like a lot of shows, there are some flashback episodes where we see more of the JSA especially Hawkman if at all possible.

Strong cast and well made. Good work by Geoff Johns and the crew - can’t wait until next Sunday night!

Really, really enjoyed this. I’m honestly not much of a Stargirl fan, but this episode showed some great promise. I’ll get the negatives out of the way first. The VFX (like every tv show) was a little iffy at times. The writing was a little weak and cliche in the beginning. The moody teenager stuff made Courtney hard to like at times, BUT with that said I think that’s not really gonna be a part of the show in the future. Besides that, I loved the humor, thought the casting was pretty stellar, and the show had some INCREDIBLE style to it. It’s Geoff Johns in every shape of the word (and I mean that as a huge compliment).

I got a Smallville vibe while watching this and I like it. Nothing wrong with the other shows on here but i Like that it’s not as dark…so far, and I like that it isn’t too soapy yet like CW series. But it’s only first episode, we’ll see how it turns out. either way I liked it and can’t wait for “Moore”. Hehe. 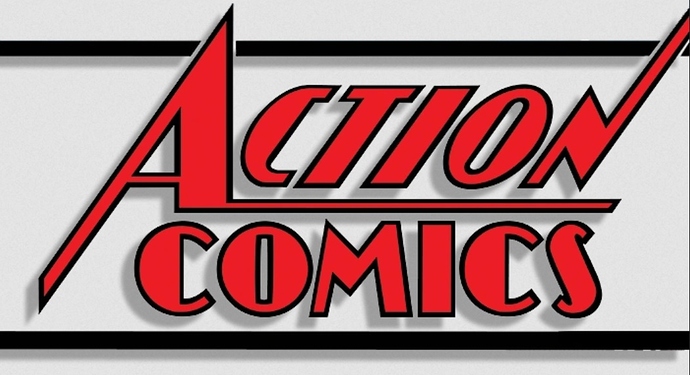 Anyone notice any nods to the Green Lantern or Allen Scott? I noticed flashes helmet and him In The pic but didn’t see GL. I feel like we don’t get enough love for GL. NO GL in the CW series and no sign of a movie or show with GL in it.
Johns did so much for GL that there’s so many things they could do a Lantern show about.

yeah, that was like one of the only references I caught.

I couldn’t sleep, so I decided to watch the premiere, and I have to say that things are off to a very strong start, although I was having a hard time keeping track of all the characters we were introduced to, especially the students at Blue Valley High.

I like that the Cosmic Staff seems to possess some degree of sentience because it helps set the show’s version of Stargirl apart from other versions of the character that we’ve seen in live-action, and also makes it more than just a prop or a weapon.

Most shows in the Superhero genre tend to rely on some heavy conveniences for the sake of telling their story, but this episode kind of piled them on a little thick, what with Barbara just happening to get a job at a company and in a town where pretty much every member of the ISA lives and that is owned by a member of said group, their kids drawing a line in the sand with regards to Courtney, and Pat being really rather quick to dismiss the idea of Starman having been Courtney’s biological father, but we’ll see where all of this goes.

I’m a little fuzzy as to what purpose Courtney’s mom Barbara and Pat’s son Mike serve in the series, so hopefully that becomes clearer as we go forward.

Overall, I thought the Pilot did a very nice job of setting up the major players, although the way the episode ends seemed a little bit ‘off’ to me, as if they split the Pilot’s story in half for some reason.

I was looking forward to this series and I was not disappointed. I loved seeing the JSA in action, a live-action Grundy and the production was top notch. Cannot wait for the next episode. I love my adult DC universe originals but it’s nice to have something on the service I can watch with my family. Kudos to the cast and crew!

That episode was a lot of fun. The highlight was seeing the JSA in action, of course, but I’m looking forward to seeing the relationship between Courtney and Stripsey grow.

Did the “Hey, we’re trying to watch the movie you a*******! Its a classic!” bother you or your family? This was a more family friendly show than Swamp Thing or Teen Titans have been but that moment stood out as an exception.

Was that MMMbop in beginning playing? And I enjoyed the first episode, I can’t wait to see more Solomon Grundy.

Yes it was. I could tell right from the first few chords. My question is was that Hanson singing it? It was a new slowed down version but still sounded like Hanson.
And yes more GRUNDY.