Are you for it or against it?

For if Atom Smasher is not around.

Where are y’all getting these ideas?

I think the central romance should stay Pat and Barbara. Courtney should focus on building her character, finding herself, and making friends. Romance isn’t needed. At least not now.

No, but seriously, where are y’all getting these ideas about a Courtney/Cameron romance?

I kind of really really hope that the shipper community are content with the existing CW shows.

I don’t want to see Stargirl staff having to flee social media because A is together with B, when clearly A should be together with C. Happy staff make happy show.

Great creators learn to ignore fans for a reason.

I’m all for a Romeo/Juliet type romance. However, I don’t think there’s room for it in this season. Perhaps further down the line would be appropriate. But as of right now Courtney has a bunch of other stuff to riddle out.

Wonder if we’ll see Artemis Crock develop feelings for Icicle Jr. like in the comics. Definitely an interesting love triangle if Courtney is in the mix! 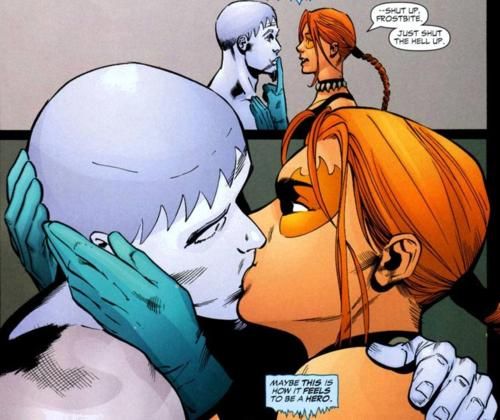 To be quite frank, I am for sure against it. Courtney has so many other things going on in her life right now, and especially since she just moved to Blue Valley, I think it’s a little quick to be guessing at a possible romantic interest. One of the things I’ve found refreshing about the show is that Courtney isn’t set up with someone from the get go, because if her step-dad’s a superhero and her bio dad might be a superhero (okay, but seriously, who actually believes that?), in addition to adjusting to a whole new setting and becoming a superhero herself, she definitely has other things to worry about. I haven’t watched the third episode yet, but the poor girl doesn’t have any friends in Blue Valley yet!

Oh, ack, that was much longer than I was expecting that to be. Whoops.

Here we are, episode 3 and the shippers just can’t stand it. They have to ship somebody to somebody else. I’d much rather see Barbara develops a secret fetish for the STRIPE suit.! Now I could get behind that.

Against! I’m so goddamm tired of this troupe

I hate love triangles immensely. So it wouldn’t be interesting in my book. I’d despise Icicle Jr stringing them along and get pissed at both girls for fighting for a guys attention

cause they were throwing little hints that Courtney will get romantically interested in Icicle Jr.

ugh I’d rather not have them get romantically involved.

I was a fan of the Courtney/Billy Batson relationship in the comics, but that seems unlikely to happen.