Just finished reading a comic and saw this at the end 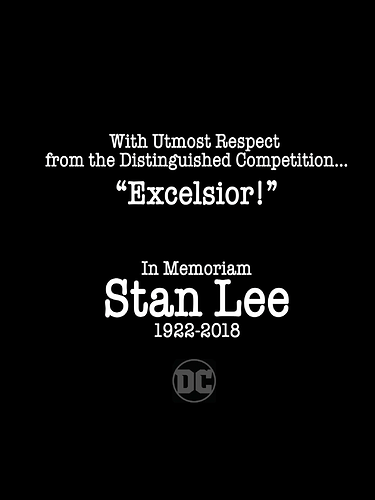 Even though DC and Marvel are competitors, they still have respect for each other.

When Julie Schwartz died in 2004, Stan Lee wrote a Superman story in his honor (with art by Darwyn Cooke):

DC Universe really needs to include that comic, doesn’t it? (Though I’m afraid I’d just bawl my eyes out over the loss of those three great comics figures while reading it.)

Most definitely. That should definitely be added to this streaming service, I would love to check that out. Definitely worth collecting.

While there has always been a rivalry between DC & Marvel, it has by and large, been a fairly friendly and respectful one. He was a great creator in comics. He became the voice and a face for comics and was an ambassador for the medium for decades. Long before it was fashionable. Did he have to do cameos all those In MCU movies. No, he wanted to, he loved doing them. Stan Lee, Jack Kirby & Julie Schwartz are on the Mount Rushmore of comics. We will never see his like again.

So DC paying tribute to Stan is understandable and a class act to do.