So in the episode we see the metagene of a human teen activated and the teen grows blue gills and some webbed hands and her hair turns white!

We don’t see her speak in the rest of the episode so she isn’t named but I believe this could be the Young Justice version of Dolphin from the Aquaman comics! There is even a little nod from Beast Boy turning into a literal Dolphin to rescue her.

Any thoughts from anyone? I hope it is Dolphin! Would love another Aqua-Family Member back on the team and show since the Aqua-Family’s presence this season has dropped off tremendously compared to previous seasons! 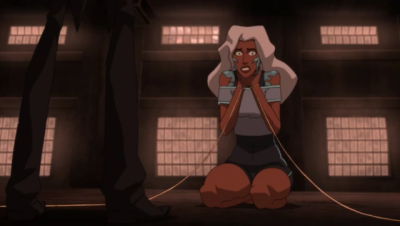 I assumed it was dolphin even before Gars hint. Nice job with an origin

I think it might actually be Lorena Marquez, Aquagirl.

I would love for it to be Dolphin. it might not be though…

I think it’s Dolphin. Lorena never had white hair to my knowledge & was never mute. They added she fell in the water which would be true of both characters. Lorena from what would eventually be known as Sub-Diego. Dolphin fell of a ship & had no contact with either species leaving her mute until a later time. Both had modifications i.e. gills, webbed feet. However, the costume & hair, plus the fact she appears to be mute, for the time being, would point more to Dolphin than Lorena. Who knows?, just one guys observations but I believe it’s Dolphin

It is possible that it is a combination of both Lorena and Dolphin, but I think its definitely Dolphin. The white hair, the gills, and webbed hands. The color scheme. Its too much like her not to be.