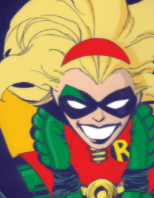 The Renegade Robins Club may have seemed at little off-brand over the last year with these Spoiler adventures, but your patience is finally rewarded: Tim steps down, and Stephanie Brown dons the Bird Suit! Let’s hope it lasts!

Discussion Question: What do you think about Steph’s dynamics with the other heroes in these stories (especially outside the pages of Robin)?

Do you prefer Steph as Spoiler or Robin?

Thanks for stopping by! See you next time, @RenegadeRobinsClub!

Really glad to see the Wizard Magazine short and the Solo #10 short story referenced! The Solo short story was included in the 2015 War Games trade, which is available digitally, so I’m not wholly sure why it’s not on DCUI, though possibly they only digitized that one story of the five or six in the issue.

I also really like Steph’s short story in the Robin 80th Anniversary 100-Page Super Spectacular #1 , though some fans found it disappointing. It fits in more or less between Robin issues #126-127.

And I really wish DC would digitize All-New Batman: The Brave and the Bold Vol 1 13 | Stephanie Brown Wiki | Fandom - one of my all time favorite comics by two greats - Sholly Fisch and Rick Burchett! I headcanon that this is an adventure Steph had between issues 126-127 as well!

Regarding the poll question, I said “Happy either way”, but I do think that Robin (and Batgirl) represent a significant “levelling up” in terms of access to training, equipment, and visibility, and while I adore Steph in all identities, I think her character deserves the visibility of those more high profile roles. And I think that her filling the role of Robin was really, really fun, and deserved a really long run (as Willingham has mentioned - spoiler alert in the video for War Games, though!)

I shall wait on the Discussion Question until next week, and I hope to see a few other Steph fans chime in on that!

Who Would Win? Stephanie Brown vs. Cheshire Polls & Quizzes

Welcome to our speculative stadium, where legends duke it out and winner takes all! All what? No one knows! We’re just here to have fun! Our fight this week is between two expert martial artists-Stephanie Brown and Cheshire! Stephanie Brown is a former Robin and the third Batgirl, and in addition to be a skilled hand-to-hand fighter, she’s a genius and expert with computers. Jade Nguyen, also known as Cheshire, is an expert with hand-to-hand fighting, multiple weapons, and poisons. If they cam…