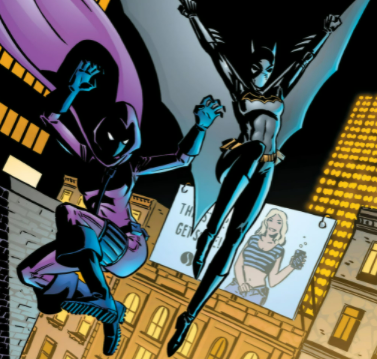 The Renegade Robins Club is one session away from the moment we’ve all been waiting for. As Steph approaches the end of her initial run, we see her continuing to deal with the death of her father and the disappointment over being canned by Batman. We can be thankful that Cass and Tim are still there for her!

Discussion Question: As we swiftly approach Stephanie’s turn as the Girl Wonder, what do you consider to be the highlight of her classic Spoiler adventures?

Honestly, should anyone be willing to work with Batman at this point, considering how he’s treating everyone?

Thanks for stopping by! See you next time, @RenegadeRobinsClub!

The Knight Moves issues are very interesting, since I’m also a huge Huntress fan. I did like that Alfred and Tim pushed back on Batman being SUCH A JERK. It’s never resolved, because editorial continued to bear down on Steph like a freight train. But it’s an interesting thing that literally no one seems to have been in favor of the decision…except Andersen Gabrych and Bob Schreck. And maybe Dan Didio. All in all, I do think that Scott Beatty’s run on Gotham Knights is a bit forgettable, but there’s still some good stuff there.

Speaking of Andersen Gabrych…I wish the ending of Batgirl #38 wasn’t so obnoxiously frustrating. I really like most of what goes on in that issue, but it just leaves Steph and Cass in really bad position, both in terms of their relationship with each other, and in terms of their emotional states.

The Willingham Robin Run - honestly, I’m not the biggest fan. I’ve listened to Willingham’s very helpful video where he talks about this run and War Games (Drawing Me Out With Bill Willingham Episode 4: I Killed Stephanie Brown - YouTube), and it’s pretty clear that what he WANTED to do and what he was ALLOWED to do were very, very different. And if you look at Fables (Fables) you can really see what he can do when he just wants to write. It’s a bit baggy, and sometimes there’s some rabbit trails that never go anywhere, but there isn’t the same sense of sketchy plotting that this Robin run has.

Discussion Question: The highlights of Steph’s classic adventures, for me are:

Her origin and her second arc in Robin (#15-16) - really solidifying Steph’s relationship with her dad.

Her friendship with Cass when the writers aren’t determined to make Steph a screwup (the Dixon issues of Batgirl and Batgirl #26, 28)

Her admiration and training from Black Canary (starting with the sadly unavailable Robin 80 Page Giant (which I have in hard copy, thankfully), going on through Birds of Prey 38-42 and Robin 90-100 as a subplot).

Her desire to be the Hero of the Suburbs, the Robin 20s-40s.

Honestly, should anyone be willing to work with Batman at this point, considering how he’s treating everyone?

when he’s being a controlling jerk, no. they don’t need that.

Yeah, I forgot to cover this in my first reply, but I got into comics in 2005, and War Games was one of my first books I read.

And as a result, I hated Batman (the character) and loved the Batfamily for nearly 15 years afterwards.

Yeah, can’t shake a bad first impression. can’t blame you. sometimes I’m okay with him, other times he’s obnoxious and holds people back, but I have to tolerate him because they insist on putting him in everything

I’ve come around on Bruce. Hilariously, the guy who wrote the Batman everyone hates, Tom King, was the one who got me to love him. And I’m really loving Zdarsky’s run as well (plus Tynion did a Batman I could love). I’m just strange, I guess. Like Steph!

when he’s being a controlling jerk, no. they don’t need that.

And as a result, I hated Batman (the character) and loved the Batfamily for nearly 15 years afterwards.

Yes, Post-Zero Hour Batman is a jerk. He started to become tolerable again after Infinite Crisis.