Soon Now, and I Shall Know: A Batman Memory from Chip Kidd 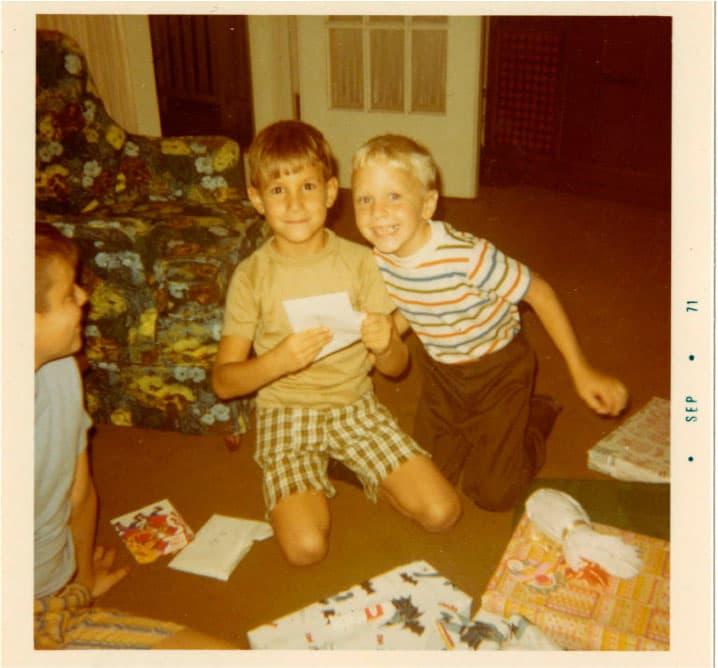 Whether you’ve been a fan since childhood or are relatively new to the world of the Dark Knight, we all have our favorite Batman memory. With Batman Day upon us, we asked celebrated designer and noted Batman fan Chip Kidd to share one of his.

At the risk of inducing much eye-rolling, allow me to suggest that it shouldn’t be ‘Batman Day,’ it should be ‘Batman Night.’ Right? It would make a lot more sense, and could be a lot more fun—like having Halloween twice within almost a month’s time.

But wow, for a life-long Batman fan of my generation (I was born in 1964), as a kid it would have been impossible to imagine an “officially-sanctioned” Batman Day. Or rather, I imagined it all the time, because I was a geek, but that’s all it would ever be: imagined.

How things have changed in the last 30 or so years. At this point, Batman is part of the national (wait—global) conversation. And it is on-going. He has become so many things, to so many people, that there are dozens and dozens of versions of the character for every possible age, temperment, gender, race, and mood.

I am often asked which is my favorite version, and I always default back to the very first year of his comic book stories from Detective Comics #27 through #37, appearing in 1939-1940, before Robin was introduced (not that I didn’t like Robin—of course I did, and wanted to BE him, but I won’t go into that here. You’re welcome).

What’s your favorite Batman memory? Let us know in the comments!

All of my favorite Batman memories involve close friends and the people most important to me. Comics and DC stories are what I share with those closest to me, and they provide a backdrop for our continued relationship together. Everything I know about Batman, and about DC as a whole, is driven by my love for the people I share it with.

Favorite Batman memories has to be playing the Arkham series with the family. Ever sense the games came out since city (got Asylum after city) I would play them and my dad and brothers would watch me play. We’d chat about the like a movie or show and enjoyed it. Done it mostly every holiday season one way it another weather a rebeat or just a different bat game(telltales).

This is only one of many but the bag has brought a lot of great memories.

Some of my favorite Batman memories: 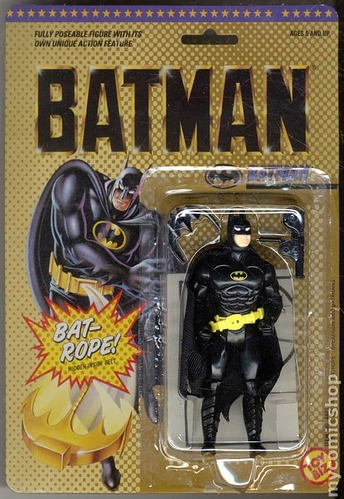 Prior to this figure, I had no idea who Batman was or what DC Comics was (give me a break, I was 6

). All I knew, upon seeing him on the peg, was that he looked cool and that I wanted him. My dad bought him for me, and I couldn’t wait until I got home to open him up and play with him, which I would do for countless hours on end for years to come.

That figure (which I still have to this day, minus his cape) was the spark that lit the supernova for my passion for DC Comics as a whole. 32 years later, my passion for the DC brand, and it’s associated merchandise, is as great as ever.

I first saw the '60s Batman series on the Family Channel in 1989. 6 year-old me had no idea what “campy” meant, I just saw a TV series with Batman and Robin, played by real people, engaging in all manner of exciting adventures against a colorful cast of adversaries.

I loved every second of it, and still fondly remember watching the show for the first time.

Despite buying a Batman figure based on Burton’s movie the same month it came out in theaters, I ultimately didn’t see Batman until it was released on VHS prior to the Christmas season of 1989.

When I did, though? Magic. It was an eye-opening, and artistically-defining, experience that I still treasure with much fondness today. 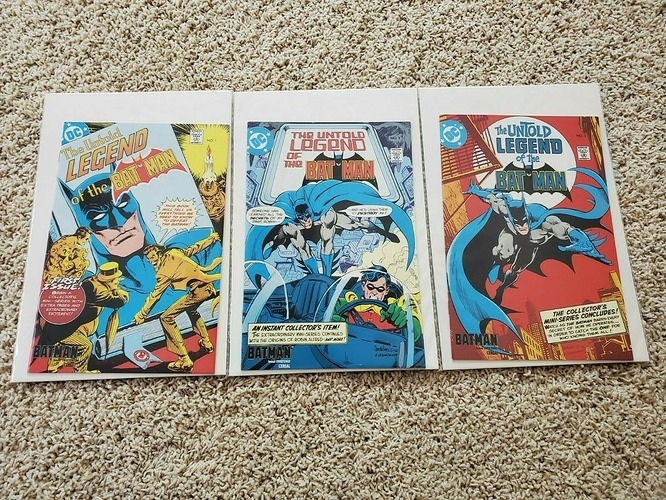 …were a mail-in offer from this cereal (still one of the absolute best cereals I’ve ever had, of which I vividly recall the taste): 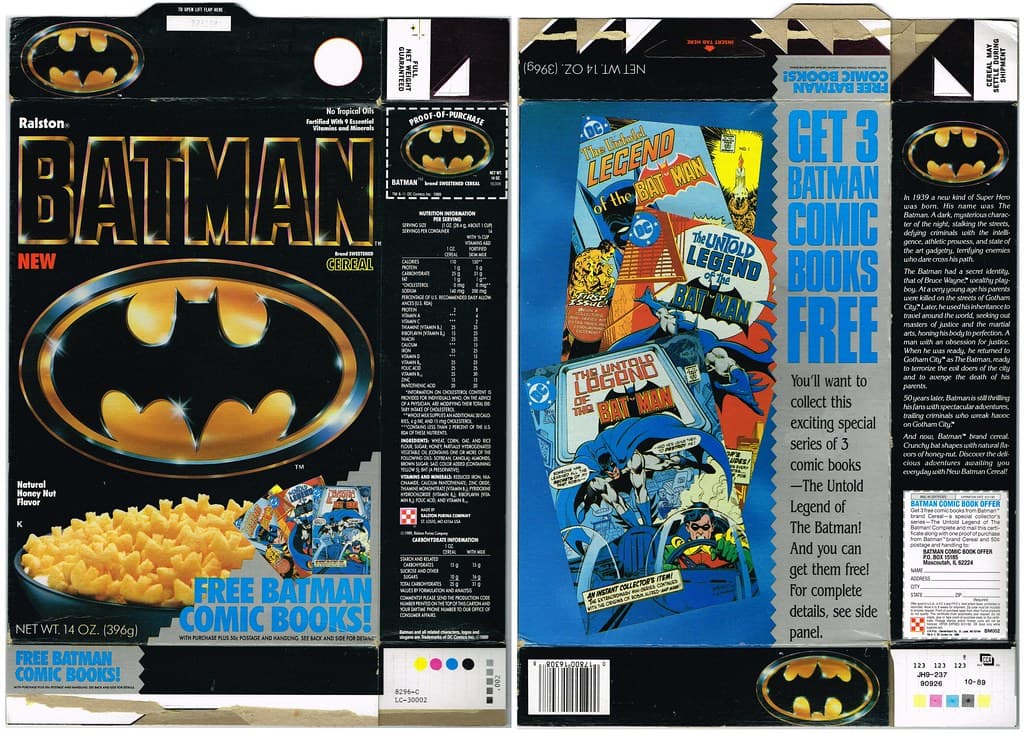 Like the Batman action figure above, they were the spark that lit the fire to a passion that’s still going strong, 30+ years later.

The Untold Legend of The Batman is a mini-series that not only got me into comic books (in addition to being my first Batman comics, they were also my very first comics, period), but it also made me a massive fan of artist Jim Aparo, a fandom which has endured to this very day.

Watching The Adventures of Batman on VHS in 1992. 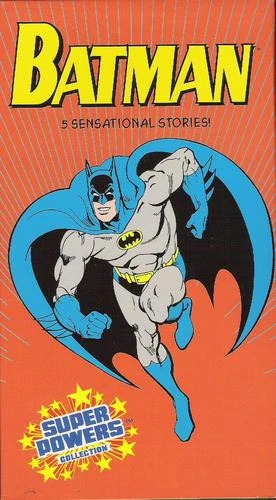 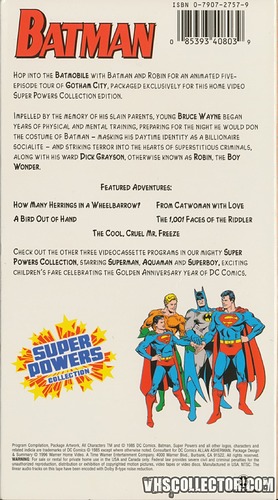 …was one of my first noteworthy deep-dives into vintage animation as a kid.

Not only was it a fun show, but it helped broaden my appreciation for classic animation, something else that, like comics and action figures, is a passion of mine that’s still going strong today.

Batman Returns was the first Batman movie I saw on the big screen. To 9 year-old me, it was a magical event. The big screen experience was so nice that I saw it twice!

Watching Batman: The Animated Series as it aired on Fox/Fox Kids.

My most anticipated new TV show for Fall '92 was Batman: The Animated Series (was there any doubt?). When I saw saw this show upon its after-school debut (along with its primetime airings), there was absolutely nothing else that came close in after-school shows that I was jazzed to get home for, day after day (sorry/not sorry Tiny Toon Adventures, Teenage Mutant Ninja Turtles and the rest).

While Batman Forever opened in theaters on June 16, 1995, I was privy to a sneak preview screening the night before.

12 year-old me’s most anticipated movie of 1995 was Batman Forever (you can’t say you’re surprised, because you certainly shouldn’t be

), so to get a chance at seeing The Dark Knight’s then-latest cinematic adventure before it opened to where everyone could see it? There was no way I was going to pass on that.

Batman Forever has always been my absolute favorite of the Burton/Schumacher quadrilogy and likely always will be.

The first time I read the Hush arc of Batman in full.

Fast forward to mid-2003 and I was slowly but surely ending my break, with Hush being one of the motivating factors to do so.

I had picked up a few single issues of the Hush arc from a nearby comic store, but hadn’t yet committed to the full story.

Even after I had fully returned to comics (thanks to the blockbuster/ass-kicking comic of ass-kicking comics that is Superman/Batman) in the Fall of 2003, it would still be some time before I ultimately read Hush in full.

Fast forward to late Spring of 2004, and I picked up these two hardcovers: 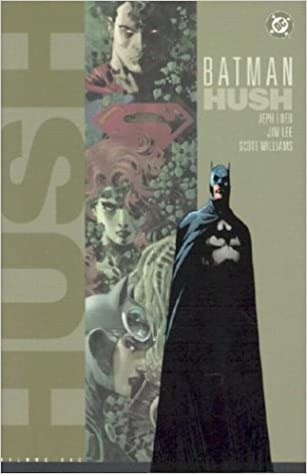 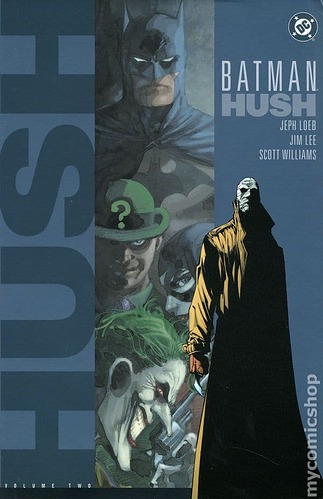 Now that I finally had the whole shebang, I dove into Hush with wreckless abandon and glee. I absolutely loved the whole thing, with Hush becoming my all-time favorite Batman story, which it still is today.

Hush was also responsible for my Jim Lee fandom going from mild to full-blown “I’m in for life.” and beyond. Jim Lee is The Man when it comes to absolutely BADASS comic book art.

Like Batman Forever 10 years earlier, Batman Begins was my most anticipated movie of its respective year of release. Was there any way I’d pass up the opportunity to see it before it opened? Absolutely not.

This movie was (and is) the best live-action origin story of Batman. Seeing it for the first time was incredibly cool, especially as each note I wanted to see in a Batman origin movie was hit right out of the park.

The Dark Knight Trilogy on the big screen.

Prior to The Dark Knight Rises’ theatrical debut, I attended a special-event screening of all three movies.

To see Christopher Nolan’s unparalleled in live-action vision of Batman unfold across a giant screen, in a giant, sold-out theater with an audience that was really into the whole experience was fantastic, and provided many a great memory.

Regarding Chip Kidd, I LOVE his work. His assorted books are always absolutely fantastic (especially Batman: Animated) and worthy of many re-reads.

The man is an absolutely tremendous talent, and then some.

My favourite Batman memory is very recent, August 10th of this year when Batman : Urban Legends #6 came out. I worked at a summer camp in a remote area and had lost my phone, no internet no outside contact. My friend/supervisor called me over to his office and i thought I was in trouble for something, he pulled out his phone and told me to read the new issue.

We read it together and I was so excited and happy I almost cried. Reading such a meaningful issue was already awesome, but sharing that moment with someone who cares as much as me, who knew I cared so much he pulled me out of what I was doing because it just couldnt wait? Unparalleled

I love Batman and DC in general, but sharing it with friends is even better.