So What's With Post-Crisis Action Comics?

So, I’ve been doing a big Post-Crisis month-by-month readthrough (focusing on major characters and any other random series that catch my attention), and initially I was planning to go back and do a separate readthrough just for the Superman books, but I changed my mind and started working on catching the Superbooks up to where I was with everything else.

And I noticed something: DCU’s library is reasonably complete in terms of Post-Crisis books. Some lesser-known stuff is missing, the annuals are kind of spotty, and obviously there’s a substantial chunk of Green Lantern that’s gone because Gerard Jones is a creep. That’s all understandable. And the Pre-Crisis selection of even the major books has gaping holes in it. That’s unfortunate, but I get it.

But why are there more than fifty (fifty-six, if I’ve counted correctly) missing issues of Post-Crisis Action Comics? I understand that DCU has to work with what’s digitized by other people already, and they’re not on Comixology either, but why has DC’s second-oldest series been so neglected? It’s not like the Superman books in general have been ignored; Superman (Vol 2) and the Adventures thereof don’t seem to have any major holes.

This even cuts well into the Triangle Era, which means there are significant chunks of otherwise-present story arcs missing. I looked a bunch of these issues up on DC Database, and there doesn’t seem to be anything wrong with them. In fact, Action Comics Weekly sounds like it had a bunch of characters and creators I really like. 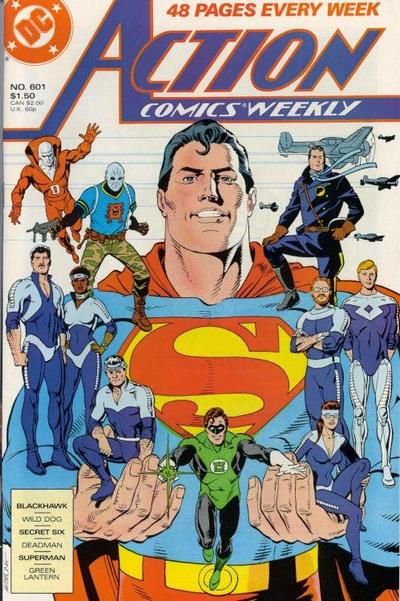 The prioritization of material that needs to be digitized explains the gaps more often than not and, for whatever reason, that segment of Action Comics doesn’t seem to be a priority.

It’d be great to have the entirety of the weekly era (and beyond) of Action in digital, but it typically isn’t the digital priority that other books have been for a variety of reasons.

There are some gems in Action Comics Weekly, so hopefully it (and the immediate issues after) will be digitized someday.

The upside is that there is an Adventures of Superman by George Perez collection coming out next year which will feature issues of Action not yet available digitally. My hope is that those issues will gradually find their way to Comixology and then DCU.

On a related note, I’d really like to see more of the 500-600 range of Action in digital as there’re alot of wonderfully fun issues in that span.

We have 583-599 digitally (skipping #600 was an odd choice), but there’s precious few other issues from that period available right now.

Yeah, this becomes more of a problem the further back in time you go. The Silver Age might as well not even have existed according to the archives. There were some great old stories that aren’t on here…

I bought ACW as it was being published, and I recall Superman not being a significant feature of the title during that time. If I remember correctly, each issue’s Superman story only comprised two pages, right in the centerfold; it was really more akin to a comic strip. Superman’s presence in ACW was really just to keep him a part of his historical comic home.

By comparison, ACW’s other features, like Green Lantern, Deadman and Secret Six all received eight pages. Green Lantern was arguably the most significant feature, as Hal Jordon was without a monthly title, so ACW was Hal’s (and the Corps’) home. Most notably, Green Lantern Katma Tui was killed in ACW #601. Overall, ACW was a mixed-bag, but I appreciated the attempt. I would like to see the return of anthology titles.

Acting as if Jones’s comics are corrupt because of something the author did completely unrelated is logically void.

I know you state that adventures of superman doesn’t have major gaps, but I’m seeing over 50 missing from the 424-649 series, including most of, but not all, 599-649 including #600 (600 hate?). I’m curious why those are missing as well as they’re from the mid 2000s. Are they really that obscure? DC seems pretty strong in everything in the 21st century, as Batman is nearly complete. But I want to chime in with the Superman neglect I’m seeing. I’ve always wanted to read the post crisis books as I was obsessed with Batman instead, and I’m sad to see so many missing issues.

@BatWatch: Well, considering everything by him was removed almost immediately after the news came out, it seems likely.

I think it’s maybe somewhat excessive, but probably worth erring on the side of taste. If nothing else, it keeps royalties from going to him and prevents a potential PR train wreck.

If it’s a royalties issue, I get that. I was under the impression that most comic book work was done for the original work with no royalties for subsequent publication, but perhaps I’m mistaken or this guy had a special exception. I’m still not sure that’s the right choice, but I can at least understand it.

I don’t understand or support people’s desires to ignore reality by cleansing history of any tangential connections to past evils. People need to deal with reality for good or evil.

@christopher.malmevik You’re right that The Adventures of Superman does have some gaps as well. It’s quite odd how issues 600-649 were the most recent of the series, yet that’s where the biggest digital gap of the series is. I’m hopeful that those issues (and the remaining Annuals as well) will be eventually digitized.

It might have to do with the hardcover collection they are putting out by Perez I think some of those key issues are mentionedAdventures of Superman by George Perez https://www.amazon.com/dp/1779500122/ref=cm_sw_r_cp_apa_i_Dj5GDb4FGXZE8

So if I want to read John Byrne’s run in AC, Superman and Adventures of Superman (plus other issues from those series which were released in this timespan) it’s almost complete except for AC #600?

@BTPGGM That’s correct. The Man of Steel mini-series that kicks off all of that awesome awesomeness is here too.