So, the comics matter. But not the movies?

So, as I’m sure people who will view this post have seen my other post about this, and are probably sick of it at this point, but I still just don’t get it. DC Universe won’t post the newest comics after 12 months, because they don’t want to take away from comic book sales. But then when it comes to movies, for some reason it’s a different story, at least for the animated films. Like the new “Batman: Hush” animated feature, they are releasing it on DC Universe right away. A brand new film, on this subscription service right away, but not a new comic. And I think 12 entire months is far too long. Look, maybe they take more pride in their comics that their animated movies, which is probably true. And I doubt myself while writing this post, knowing that this won’t change anything. But this is a community, and is here for all voices to be heard. I hope you all are hearing mine. 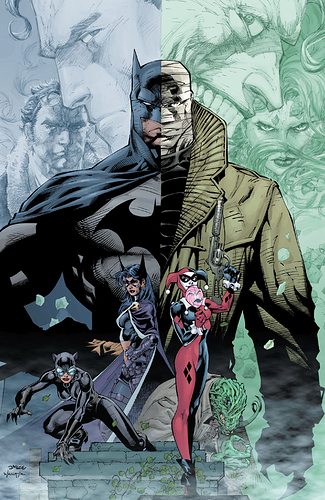 The people that didn’t want to get a subscription with more than comics would still go to comic book stores. If they wanted to get a singular issue especially.

I don’t think anyone would get it just for comics

Also comics cost on average 3.99 per book so if they came out in the app at the same time as stores people would not buy them they would just subscribe for 10 dollars a month and they get every book DC puts out that month which could be upwards of 30 books at 3.99 is 120 dollars month and change so every one would just get the app and save 110 dollars at least and that is taking money directly out of the local comic shops pocket

I meant you dont think anyone would get it just for the comics ?

I don’t really care about the movies

Alright, for what I’m about to say now, just bear with me. Maybe comic book shops are becoming obsolete! People have been predicting the same with dvds and blu rays, the digital age will prevail. That’s just going to happen with advanced technology. E readers have been a thing for a while, and that discount one of y’all was talking about, that should be a great thing. Look, all I’m saying is that sooner or later everything entertainment will be moving to digital. And comics are part of that.

DC Comics, Publisher of the comic books, which is a separate unit of Warner Brothers than DC Universe, specified the conditions under which DCU would get the 22k+ comic book DC Comics controlled for DCU Library.

One of these conditions is a one year lag, during which DC comics receive revenue from sales of both local comic book stores and digiral Comixology.

Animation films are produced by Warner Brothers Animation. These films are infrequent and are direct to digital and DVD. They make money but not much. Often they are test of concepts like live action Justice League Dark or Teen Titans. Warner Brothers itself probably decided that these films would be an inducement for members to subscribe, at a minor cost of revenue to the company. They are exclusive to the other digital services until the DVD come out, so there is revenue from that. And many people buy the DVD anyway, probably not aware of its availability of in our service or not caring. Finally, if another service is willing to pay, the movie is removed from our service. That does not usually happen for comics already in the library.

Bookstores won’t become obsolete either, but many have closed because of most notably Amazon.

Comic book shops serve comics community (they are forums unto themselves). DC Comics knows this. People will browse comic book shops and are likely to pickup more than just their “standing order”.

Digital communities like this one are great, but localized communities serve their purpose.

Also, physical media has its place. Ask people who bought digital movies from Amazon who no longer own them because Amazon’s lost the use rights to it.

I think comic book stores will become even more rare.

I think the key difference is that most people buy physical comics, and most people buy digital movies. There is a bigger market for physical comics because people are collectors and like the feel of tangible comics in their hands. There is a smaller market for physical movies because buying a physical copy vs buying a digital copy doesn’t change the experience of watching the movies. Plus, many people don’t even have DVD players, so it’s easier to buy digitally.

The other thing is that everyone has an opportunity to see movies at the theater before they are available to be purchased digitally or physically. There is already something detracting from physical sales.

Last point: there is precedent for the 12 month wait period for comics with Marvel Unlimited. As far as I know, there isn’t really precedent for periods of times where movies are exclusive to physical copies.

I think there are many more points to be made, but that’s just a few of the big ones. There are people who’s jobs are to figure out how to market movies and comics in ways to maximize accessibility while still keeping in mind the best interests of the company. Personally, I see absolutely nothing wrong with the 12 month wait. It just kind of makes sense to me.

If the problem is that it takes away from comic sales, I’d be more than happy to pay a more expensive subscription for brand new comics.

Again DC Comics, not DC Universe decides the terms on what will be in our library.

It is currently attempting to get new readers, which means its comic book output must be available by many means:
Comixology, Comic Book Stores and bookstores (Graphic Novels), rather than one closed off, niche application which may not yet be profitable to Warner Brothers.

To get newer comic books sooner, how high would the price have to be? The current price of a comic book is 3.99, more than half the price of a monthly subscription.

Right now, titles like Hawkman, The Terrifics and Justice League have just come into our library.

You can read them and decide to buy the trade soon, cutting wait time to six months or wait a year for the comics of the current month to appear.

Comics by their nature come out once or twice a month, so you always have to wait for the story to continue.

Unless you have affluent friends who are also DC fanatics who want to discuss current comics with you, what does it matter if the “new” comics in our library are a year old?

The various book clubs discuss the comics already in our library.

There are very few threads here discussing new comics, with less than 20 responses each. Ignore them or buy the few comics they recommend, via Comixology or Bookstore

Finally, when Rebirth started, there were several series of high quality, and they are in our library.

Is that true for most current comics now? It seems to me we are waiting for Doomsday Clock to end. What comic today is so important that you must buy it this month rather than wait a year?

Right now I buy ten or more comics a week via Comixology Unlimited. The discount I get more than pays for the monthly fee Comixology requires.

But I really enjoy very few of them. Some like Female Furies, I really should have wauted a year or a year and a half for the full series to come here, rather than waste my money. And the writer is going to write Batgirl?

I am probably soon going to use Comic Book Roundup reviews to determine which comic I buy each week, after I get current (most issues of Green Lantern and Martian Manhunter remain unread because they felt difficult to read initially )

I see no problem in the one year time lag. Titles like Superman Year One by Frank Miller probably won’t be in the library a year from now, as it is Black Label, so buy it now or wait for the complete story in s trade. Again DC Comics determines that, not DC Universe.

An animated movie is a one time $20ish purchase per person/houshold, while new comics are potentially weekly $4 per issue times whatever is released per week per person/household.

Now, I think DCU could incorporate a new comic digital subscription service or link to comixology that would allow customers to have all their DC comics stuff in one location. Perhaps a DCU subscription could give a % discount on comic subscriptions through the link? Even a small one would be a nice connection.

I think there would be a lot of techical and legal problems linking Comixology with DC Universe. They are owned by different Goliaths - Amazon and AT&T/Warners Brothers.

Besides Comixology Search Smart Lists, Your Books and the Comics display is way better over at Comixology.

As for Discounts, if you participate in Comixology Comixology Unlimited, almost all new comic books are 15% off, plus there are lots of Vertigo comics you can “borrow” for free, all for a monthly fee.

Depending on how many comics you buy, the 15% off can pay off the montly fee completely and even exceed it.

I think it’s also important to remember that DC only animated movies (not a partnership with Nickelodeon, Batman vs TMNT) are only put up on here the same day they are rentable via digital services like itunes, Amazon. Batman Hush is already available for purchase only. It’s only when the rental (and in some cases the DVD/Blu-ray sale) is available.

I’ll usually wait until it comes out here to stream and watch it the first time and see if I want to buy it. I do that with most movies, as I like the extras available only if you buy them. The BTS, design discussions and other docos. I was just watched Batman 89 and realized there was more extras/docos time wise, than the actual film length. Film 2 hours 6 min, vs over 2 hours 30 min in extras. I bought Batman vs TMNT because I knew it wouldn’t show up here soon. I’ll wait for Hush to drop and watch it, than I’ll decide if it’s on my buy list.

I WISH we got all the docos here, but one reason we don’t is because they are part of the “buy it” incentive and usually not part of the DC Animated owned material. Hopefully as the older movies get long in the tooth, maybe, someday, they’ll show up here.

IMO, we need more docos. They add such layers of history and insight. The HQ doco from Batman & HQ was great to listen to Paul Dini about how HQ was conceived as a one episode character, but she really resonated and became a BTAS fixture, she eventually made it into comics and is now a very recognizable character in the DCU. (Maybe 10, certainly in the top 20, of characters general population (aka - non-hardcore DC comics fans) know and recognize. She is certainly better known to the general populace than Doom Patrol, Swamp Thing & Stargirl.

Marvel releases their books after 6 months, and it doesn’t appear to have cut into their sales.

For what it’s worth.