So before I start and ask for your thoughts and go over some of mine I have to say I haven’t been a big fan of Snyder’s movies. Most of them are pretty bad with some poor understanding of characters, but that’s mostly coming from me being a hardcore comic fanboy, so there’s bias.

Now that that’s over what did you all think of the trailer?
My personal thoughts are pretty mixed on it.
Darkseid and the rest of the New Gods shown look disgusting and really just lack color to them. The whole gray big guy thing could work for Darkseid, but it really doesn’t work with Steppenwolf.
I’m not sure what it is, but the Flash feels more like Barry in the trailer, is that because he barely talked? Probably, but he didn’t seem like the eager fanboy in the theatrical cut that I despised. His costume looks brighter as well, which is a problem I’ve had with the DCEU as a whole being too dark looking. He still runs like an idiot though.
I’m actually really excited to see what’s in store for Cyborg since he seemed the least changed alongside Wonder Woman.
Black Suit Superman! It looks a bit odd with the cape, but its pretty cool to see this suit now.

So those are some of my thoughts how about everyone else?

I’m actually glad I’m not the only one not so thrilled with Snyder’s version of movies. He doesn’t have the heart or characters down in my opinion. As a huge Batman fan, some of the lastest stuff has made me ill

yeah same here, its Superman as well for me. He just felt so emotionless and him killing Zod is a big no no for me. Same goes for Batman people wanting him to kill breaks my heart. I really feel the people making these movies should absolutely love these characters, the movies should be love letters to their greatest stories not whatever Man of Steel and BvS was.

I literally busted a gut laughing as soon as this came on: 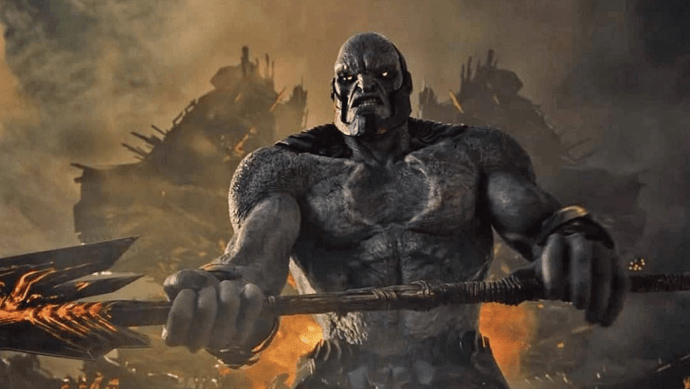 I really want to know what the designers were thinking when they designed him. He just looks disgusting. It already looks to be a significant improvement over the “Saturday morning cartoon” theatrical cut.

Make him as un-Kirby-like as possible?

It already looks to be a significant improvement over the “Saturday morning cartoon” theatrical cut.

The hilarious part is that James Gunn released footage from his R-RATED Suicide Squad movie today as well…and everyone looks like the action figures from an 80s cartoon series.

I think I love it.

Oh, I think that approach will absolutely work with James Gunn. One of my favorite things about the DCEU is that every director is able to put a particular artistic stamp on their own movie. And that’s why the theatrical cut of Justice League is the most disappointing film in the series–it’s the most compromised. (The original Suicide Squad was compromised as well, but not to the same extent.)

One of my favorite things about the DCEU is that every director is able to put a particular artistic stamp on their own movie.

On that I can absolutely agree.

Rewatching Man of Steel and Batman Vs Superman (Ultimate Edition) made me realize that Zack took on the very difficult job of building up a world in basically 2 movies. Man of Steel was ok to me, not the Superman I prefer, but I could see him growing. BvS in my opinion was only supposed to build up to Justice League.

When Joss threw out everything that Zack was building up to, it further damaged BvS as a movie. I have no doubt that Snyders Justice league will be vastly superior to the Theatrical cut, even if only because it follows the original vision for the story.

I think the Multiverse/HBOmax route is a great idea because clearly Zack’s style only scratches a certain itch. I look at the DCEU as each directors take on the characters and find their execution very interesting, Zack included.

I will say that if someone was not at all into BvS that I wouldn’t think this would win them over.

I’d rather a director make the movies for fans of the characters and series they’re using instead of prioritizing their " vision" but neglecting your audience seems to be a trend in media these days.

seems like it. Couldve at least given him a shirt or armor

Believe me, I was completely shocked that there was non-ironically a movement to get this cut out. With the hate that BvS got, I wouldn’t think people would be hankering for this movie, but as you can see, there is a fanbase. I heavily support it because Warner Bros. did do wrong by Zack given the circumstances.

I do think they need to be careful with this hype train because this is going to backfire if the cut is not well received.

I know there’s a fanbase, my social media wont let me forget. It’s just that this is a newer fanbase, and the movies basically just don’t care much about comic fans and do whatever they want. Which is also a trend for creators lately

Honestly I don’t see it living up to the hype. The trailers supposed to show the most impressive scenes yet nothing was that impressive in this trailer. Nothing in this trailer shows me that the movies story is going to be any different. It looks to me that it’s just going to be a bunch of new scenes, maybe some scenes taken out but overall it’s going to be the same movie. It looks like they are going to make the movie more serious and put more emotion into some scenes too.

I understand that it is possible we didn’t see a lot in the trailer because they don’t have it ready yet and maybe that’s the case.

I hope this movie lives up to the hype and it’s successful but I just don’t feel that it will.

So are you saying that you don’t like the fact that basically, these movies create different fanbases for the cinematic universe alone instead of adapting the characters in a way that makes comic book fans happy?

I think they purposefully used scenes that we already saw in the theatrical cut so as to not give away too much.

I hope it more or less feels like a different or at least more expanded movie.

What about the movies make you feel like they bastardize the characters?

Personally, I feel Super Hero stuff works better in TV or a Series, due to the long arcs. I have never held my expectations very high for a Superhero movie as I have for a show or limited series.

I’m also not a movie person lol. Most movies I hate, I know that sounds weird haha.