I’m really surprised to see this happen, but in a good way. I can’t say I was ever pulling for this to be released the way a lot of supporters were, but I’ll be incredibly curious to see how it turns out nonetheless

Same I never was on the hashtag or begging for this. I was never against it but some people were just relentless. Now that it’s happening though I mean there’s no way I’m not gonna watch it.

It is confirmed. After years of facts confirming that Snyder finished it and people denying it, HBO Max has confirmed that they plan to release Zack Snyder’s cut of Justice League on HBO Max in 2021.

I’ve never cared about the Snyder cut. But I’m glad people have gotten what they’ve been begging for and that Snyder gets to finish the film after the circumstances. I’m also glad that I can stop hearing people begging for it lol. But I am preparing my self for a lot of I told you so’s from some forum members. Haha

Good. Now everyone can shut up about it and move onto how disappointed they are with it next year after its released.

Nice. Excited to see this when it comes out

I’ll definitely check this out. I enjoyed Justice League, but I’m curious to see what the original version would have been like. 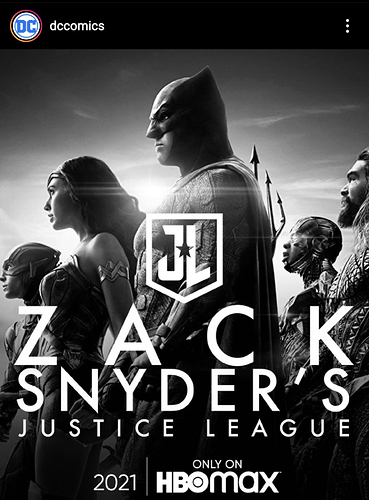 Does anyone else worry that this will screw up the state of the DCEU?

If it’s liked, people will probably want all changes that were made undone. That could mess with anything that got released or was planned to be released after the theatrical Justice league.

If it’s not liked, it would cause an uproar that the time was taken to finish and release it.

I personally am curious to see it. I just hope the DCEU doesn’t take a hit.

Is there still a DCEU?

I’d say after Joker and the interaction between the Flash’s in Crisis that it’s a full blown Multiverse now.

That’s the real question. Thankfully WW84 is set in the past, so no change there. Aquaman didn’t really impact the JL storyline. The Flash & Shazam 2 are early enough in development that they can adjust. WB taking their sweet time developing movies may pay off if the SnyderCut does become a launching point for future stories.

And honestly I think it will all depend on how the SnyderCut is received. If its a hit and WB makes a big profit it could replace Whedon’s as the official version, and future movies could build off of it. If its only a moderate hit and still gets lots of criticism, then they’ll write it off as a one-off director’s cut special only.

There’s no live action shows or movies currently in production. Pretty smart move to ask what they had sitting in a can that people will care about, and plug it into the lineup for when there will be a gap in new content.

As a young boy, DC comics resonated with me. My favorite shirt was a blue shirt with a red logo, and I still remember begging to leave my “Superman Curl” when my grandfather cut my hair.
Let the Snyder Cut come and May it wash away the baseness of what once was and restore DC to the glory of when young readers picked up their first comics and watched the Justice League fight for the ideals that we should still hold dear to this day!

I think audiences are smart enough to understand this is an alternate cut. 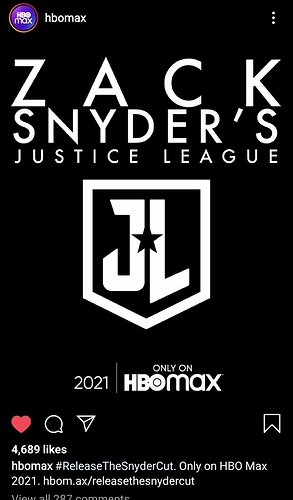 But people on this forum told me it doesn’t exist, it would cost too much to complete, the cast and crew who’ve talked about it were just lying to us, WB hates Zack Snyder and would never work with him again, anonymous WB insiders said it will never be released, etc., etc., etc.