Smallville / Riverdale Crossover! How Would That Play Out?

I mean basically she does lol

I’ve heard of Scientology but this is the first time I’ve run into the area of scholarship called Smallvilleology!

Just to play on words

A Smallville (TV show) done as a animated one shot also using the Smallville S11 stuff (so that Booster, for example, can make an appearance and we can also have Kon-El) with the Riverdale TV show (also using the Netflix Sabrina) would be fun but I think it’s all wishful thinking.

And I’m not sure how the Betty & Veronica and HQ/Poison Ivy sold or the Archie meets Batman '66 but I’d settle for a six issue mini-series crossover between Smallville and Riverdale.

@Jitsu maybe can spread the word for us to his buddies at Burbank!!

Well, Rosenbaum and Welling keep talking as if that Smallville Animated series is happening. 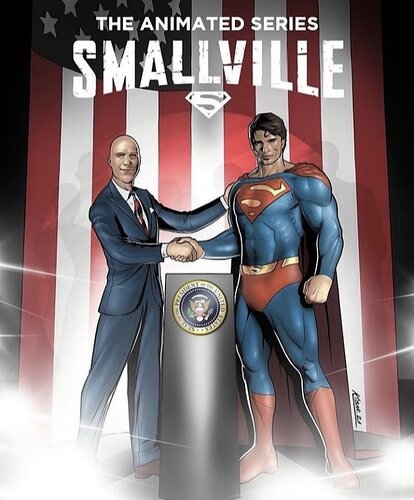 Superman is wearing a red trunk, which makes me love this even more! Can’t wait to see it!

Oh trust me, if there is news on Season 11 show, we will have it in the @SmallvilleFanClub!

What if it was on a service you already had?

Wow I must be getting really old. I’m not sure how you’ve never seen Riverdale.

I strongly suggest the first two seasons if you haven’t. Maybe we should do a watch along of Riverdale!

Agree, the first two seasons of Riverdale are a lot of fun. The later ones are Something Else.