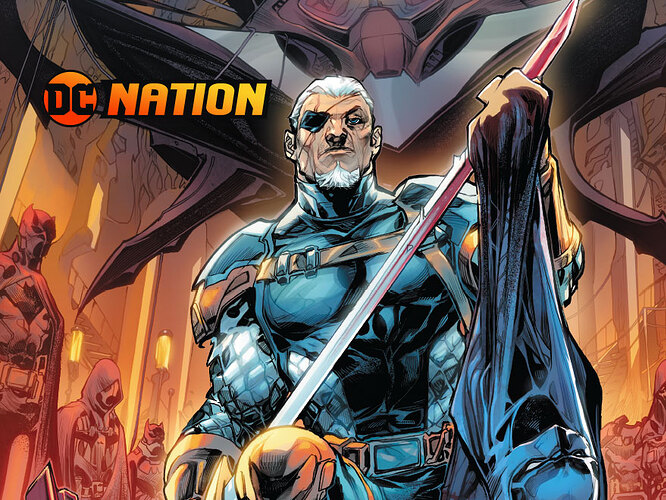 For more than forty years, Slade Wilson has been one of DC’s most compelling—and loathsome—antagonists. He’s famously targeted the Teen Titans numerous times, along with remaining a consistent threat across the DC Universe. And now he’s ready for something different.

In the newest solo series starring the character, Deathstroke Inc. from writer Joshua Williamson and artist Howard Porter, Slade joins with an ages-old secret organization called T.R.U.S.T. His mission? Hunting down the biggest villains, with the coolest (and deadliest) technology at his disposal. But as Williamson is quick to note, just because Deathstroke is fighting bad guys, that absolutely doesn’t make him a good guy. Luckily, one genuine hero is on board to keep him in check: Black Canary.

DC Nation spoke with Williamson about what makes this series distinct from past Deathstroke stories, the inherently suspicious nature of T.R.U.S.T., working with Howard Porter, and what Black Canary might really be up to.

To read the interview with Joshua Williamson, head over to DC Comics!

Are you a fan of Slade Wilson? Let us know in the comments!

This guy looks like my best friend at Madam Mantis’s class, Stroke Death.

Are you a fan of Slade Wilson?

I am a fan of Slade Wilson and his Deathstroke moniker. Have been since…1991, or so.

Deathstroke Inc. #1 is my most-anticipated, non-Superman related, new release of the week.

I’m excited for the series because a new Deathstroke series is always fun, and because Howard Porter is on pencils. He’s been a favorite of mine since I discovered him via his work on JLA.

I’ve been a fan of Deathstroke since the New Teen Titans #2 back in the 80’s. His relationship with his 3 kids (Grant, Jericho and Rose) are just as tragic as Batman’s relationships with his Robin’s (Damian, Jason, Batgirl’s). I respected him as a mercenary, but saw him differently when he fought the Justice League members in the Identity Crisis series. To see him fight a Flash, a Green Lantern, and other members to a stand-still spoke volumes. Also to see a Super-Villain hire him for protection showed how much he’s feared.

Esai Morales killed it as deathstroke. Also loved the animated film knights and dragons. The only thing I didn’t like was that slade wore his heart on his sleeves too much. In the Marv Wolfman comics he was never like that. He was more of a Clint Eastwood man with no name type of character.

First issue was splod. Looking foward to the mysteries in it being resolved.