Show What You Got On Those Walls!

So what DC related things do you have on your walls, or you wish you could put on your walls (thanks marriage jk) ! I’m going to show you what I got; so let’s have fun. 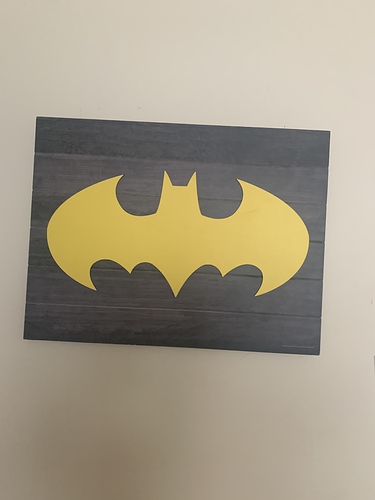 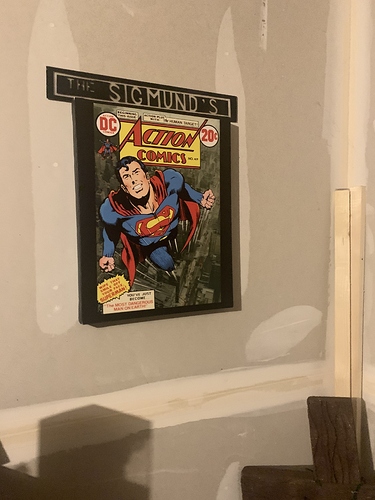 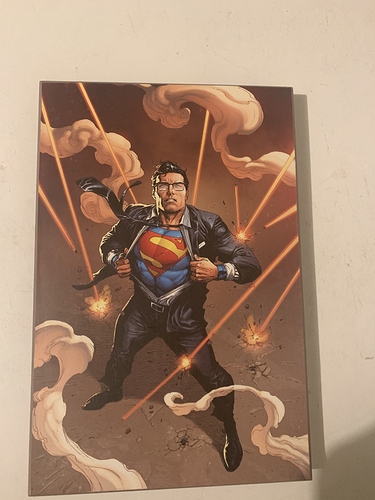 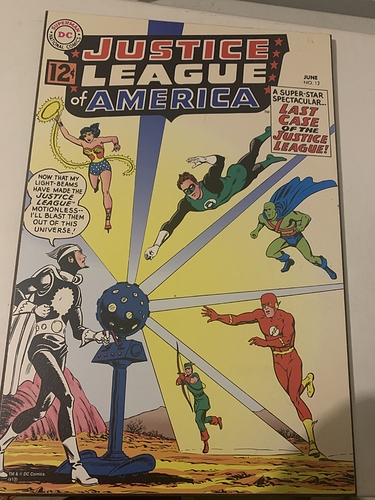 I know I’m gonna be lame here, but I don’t have anything. Nothing decorating my home except an old Sandman 20th anniversary poster.

I’m not currently at home to grab a picture, so you’ll have to do a Google image search.

I’m a t-shirt representative of the comic book community.

Only a few items on walls: 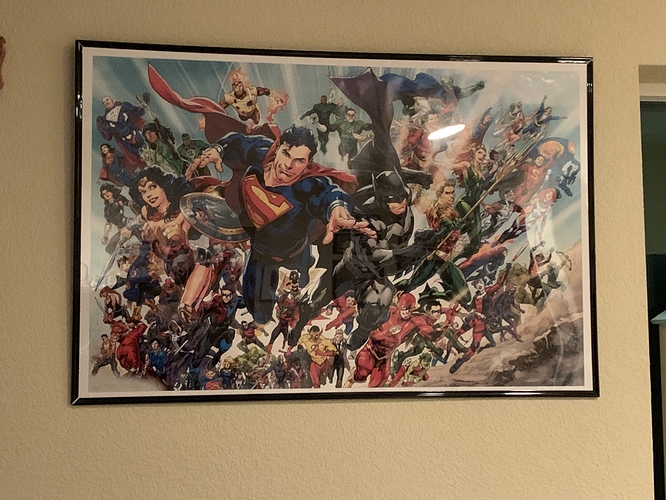 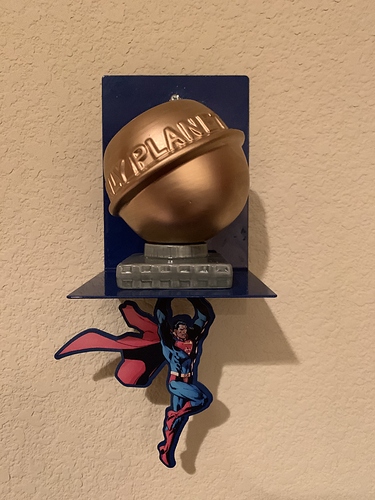 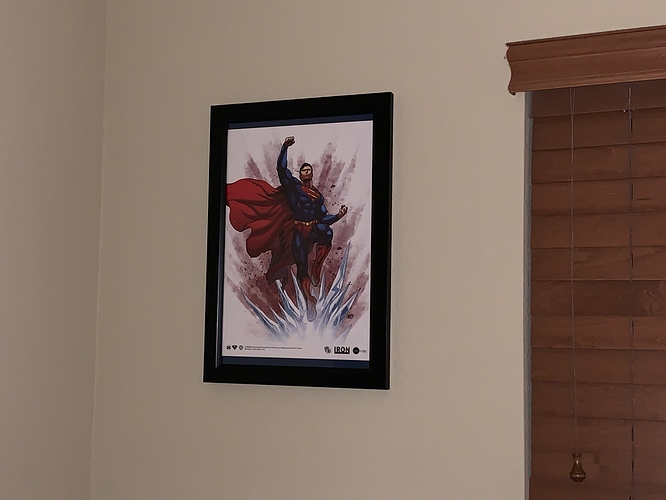 You wanted to know and here they are. Don’t mind the knocked over Figures, I need to clean up a bit. Most of the posters are hand drawn. Including the hand drawn map of the world and the world I created for my book. 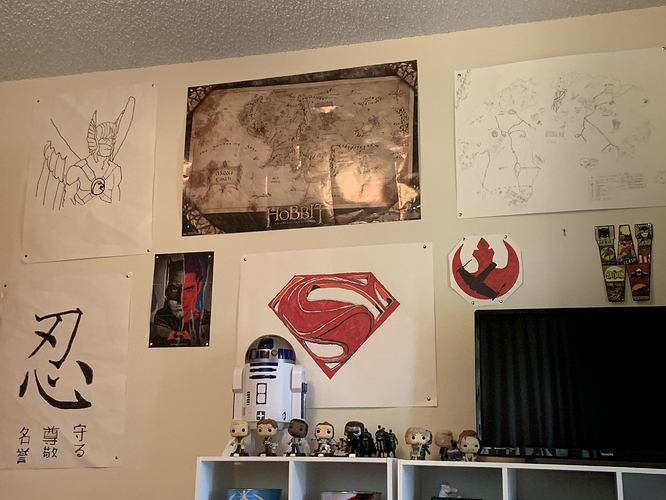 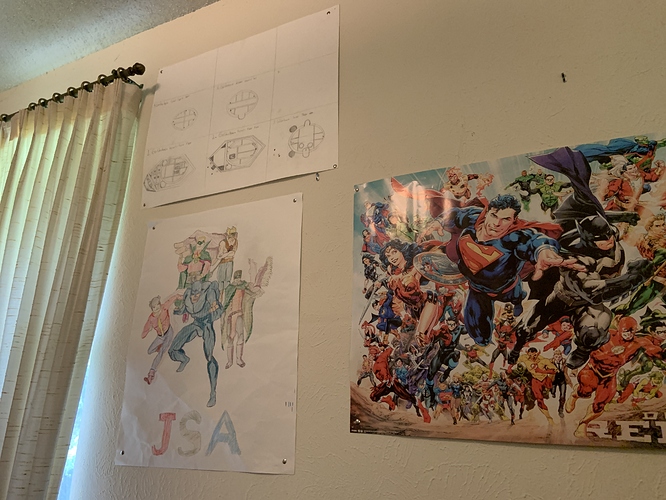 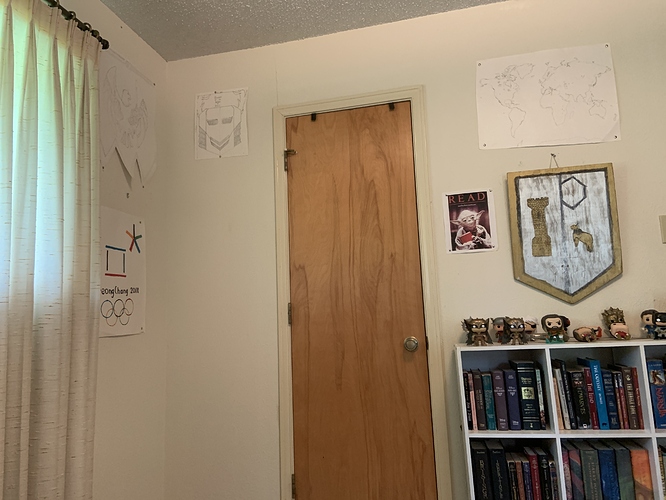 In my unfinished basement, a family member who was downsizing gave me a sweet 9 foot Brunswick pool table with a ball return system underneath. The felt was completely moldy and destroyed so I had to break it down and learn to re-felt a table and then do it. Afterwards, I decided to finally hang up box lights I had for a long time in storage, some of which needed their electrical guts replaced. 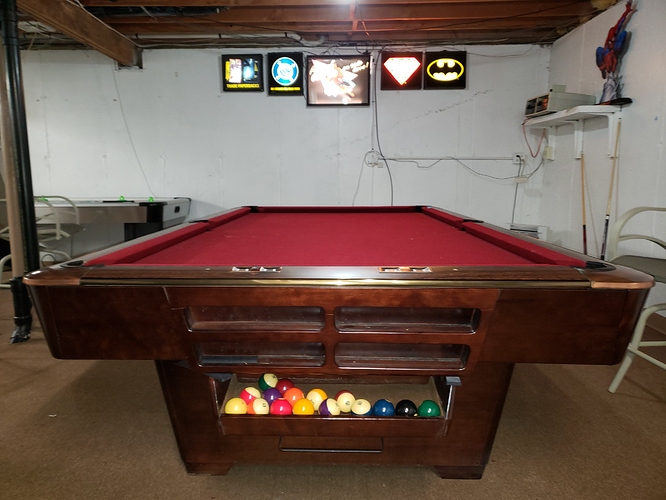 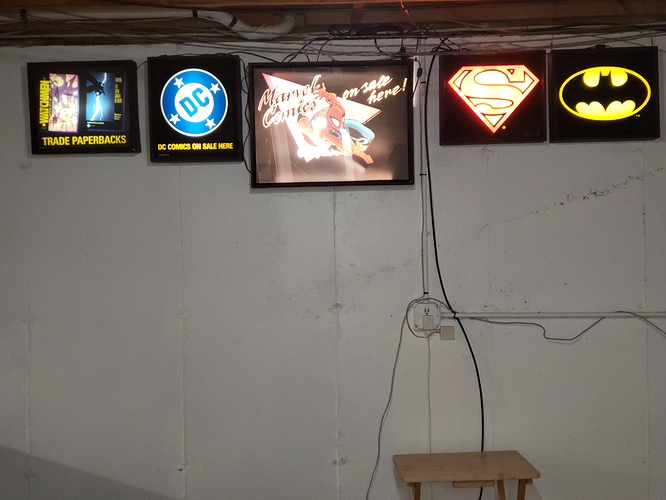 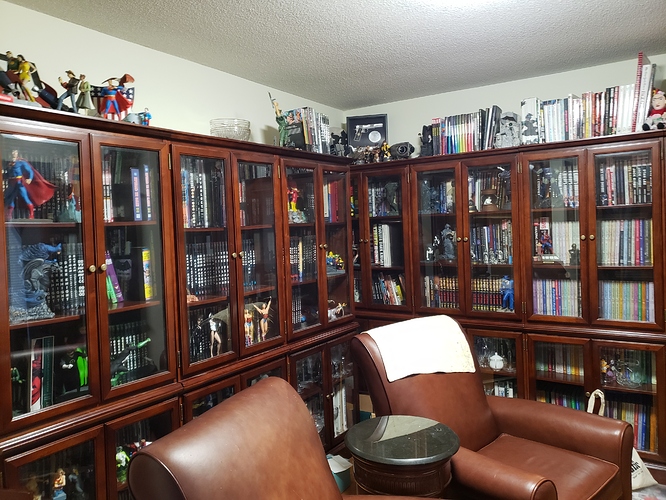 The pride of my library has to be two one-of-a-kind drawings. One is of Mr. Harlan Ellison: 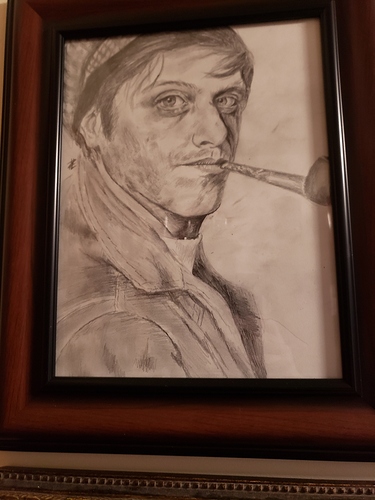 The other is of Mr. Neil Gaiman: 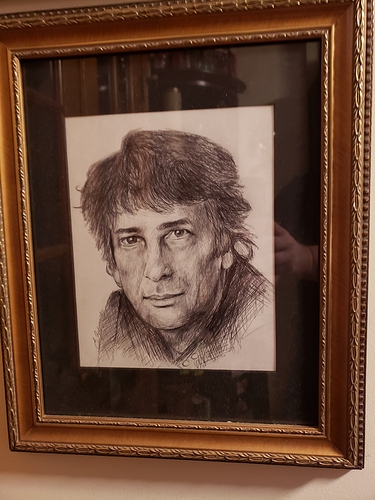 They are one-of-a-kind because they were drawn by my incredibly talented daughter. Very proud papa here!

Thank you for asking, @jsmsiggy !

I am EXTREMELY jealous of your library. 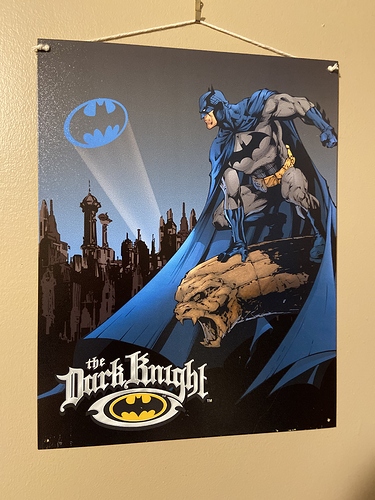 Just a humble Batman poster. It’ll be accompanied by a lovely Doom Patrol poster in the near future, though! Just ordered mine a couple of days ago from the DCU rewards program

@Green.Lantern Thank you! As a moderator, that’s high praise indeed! If you’re in the neighborhood, please let me know and maybe some scotch that’s also in the library (not in the frame) can be enjoyed!

Also in the library and not in the frame are a collection of Cerebus “phone books” and a Cerebus stuffed toy on one shelf and a collection of “Women Of The DC Universe” busts on another shelf. Maybe I should move them closer together, but I fear I’ll wake up to a pile of fake polyester stuffing and shredded “phone books”…although maybe that would be appropriate!

Generally speaking, I envy people with rooms dedicated to their stuff.

I only have one word for you: Awesome!

Oh and that is one talented daughter you have there

Third and finally: thank you for your kind words about my daughter! Sad that she was denied a proper graduation from college but I know she will do the most amazing going forward! So proud!

Thank you. Who knows? Maybe someday in the near or distant future I may take you up on that

@DocAtlas buddy ol pal we got to met and drink and lose money on pool ! You should be a very proud dad she is killing it in the realism scene aka police sketch artist. Lol

@jsmsiggy You saying police sketch artist about my daughter’s work in my library reminded me about why I designed my library the way I did.

There once was a comic industry figure, now deceased, that some revere but really should have had some time in police custody (think Harvey Weinstein, which is why I very subtly threw shade at the aforementioned figure in my Doc’s Bootleg thread)

Anyway, in a fanzine back in the day (something like The Comic Reader), I read an article about a late night talk show in the 70’s that had on a few comic industry people, including the revered aforementioned figure, henceforth will be called Revered AF (yeah, I went there

) . Well, at one point, Revered AF said comics are garbage and they’re for reading on the toilet. The author said said he instantly wanted to throw his TV out the window.

At that point in my young life, I decided no comics in my bathroom. Rather, they (or the collected editions) shall be in a room that commands respect, thus the haberdasher bookcases, the reclining leather club chairs, and the 18 year old Macallan scotch with the Waterford glasses (which sit out of frame).

But fret not, kind reader, over any possible slight I might have implied toward Revered AF. Because right next door to my main library, may I please present The Revered AF Memorial Library: 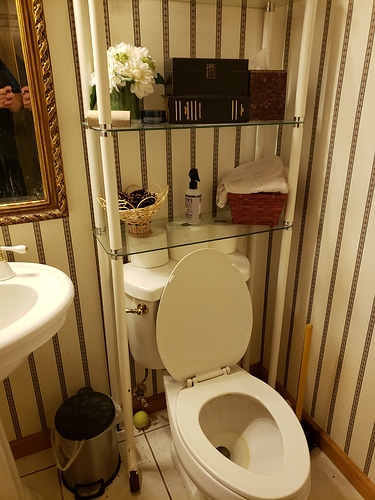 On the shelves of The Revered AF Memorial Library, you can this library’s sole offering as a tribute to Revered AF: 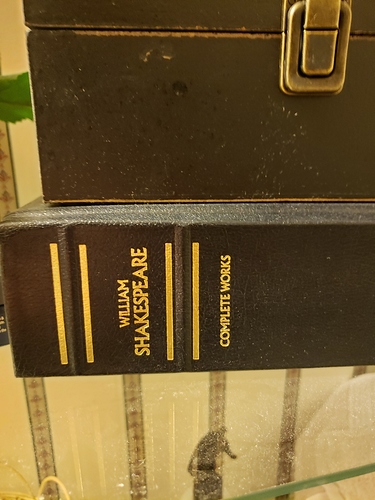 Thanks for taking the tour!

Dang @DocAtlas the passion I agree with you comic book Army strong. If someone gets offended by that look up what kind of difference that comic books made in the heat of WW2 ( not Wonder Woman 2 you Younghans think and call me boomer one more time and I’m turning this thread right around.) sorry flash backs

I have a poster and sketch I got during the Creators4comics auctions on my wall. I also have a Batman symbol mirror, that I don’t have a picture of. (Sorry for the bad quality pictures of them) 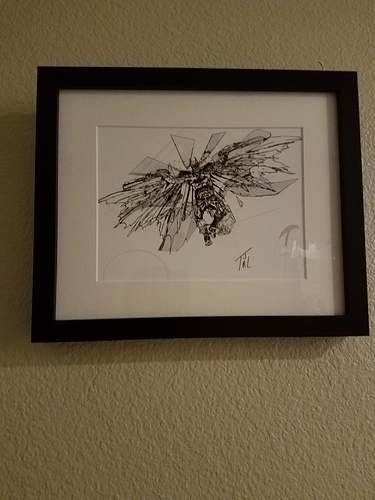 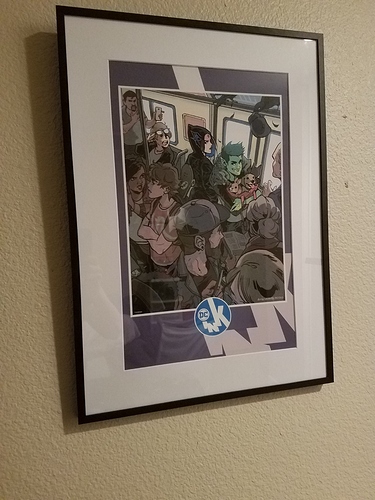 @jsmsiggy Actually, out of the frame in the Revered AF Memorial Library, at the bottom of the bowl of the toilet is a picture of the famously unfunny, bigoted, misogynistic, ignorant, and comic-fan-hating Bill Maher.

Oh, as Maher would say, I kid, I kid!..his picture is on the sides of the bowl too!

@Behemoth Sorry I missed this, maybe I missed this elsewhere too, but you mentioned your book. Any details you can share?

I absolutely love that first picture of all the heroes. Where did you get it?