Should the rest of the Fab Five appear in Titans

We have quite a few new characters being added to season as well as some just upgraded to regulars. That includes Wonder girl, Dick’s childhood confident. It might be too much at the moment but I wouldn’t mind Dick reuniting with Wally, Garth and Roy as well. It be fun to get their old band back together. 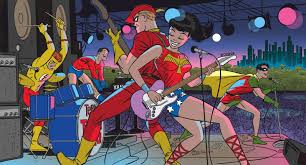 It writes itself! But actually yes, I would love to see the boys.

Sure, if it can work.

SN: I love that Darwyn Cooke art. It’s a variant to some New 52 issue but I don’t remember which one.

Titans has too many characters tbh

Absolutely, if anything for a single episode.

Those Darwyn Cooke variants were nice. I think the He-Man book even had one.

By Fab Five I thought you meant the guys from Queer Eye. I was like, sure, why not?