Should Superman's Parent's Death be a Part of his Origin?

I’m a bit of a new comic reader, in comparison to a lot of others on this site only having started a couple of years ago, but I’ve noticed in some modern interpretations of Superman’s origin it has either Jon or Martha or even both parents die for one reason or another to seemingly “motivate” Clark. Even as a new comic reader that didn’t sit right with me so I went back through Superman’s comics and read some of his older origins like Secret Origin and American Alien. I don’t really understand why authors or directors think they need to kill off a parent just to motivate a hero, Superman still works even if his parents are still alive, correct me if I’m wrong, but he’s basically the ultimate good person, helping someone just because they need help, not for some vengeance or preventing people from feeling the pain they felt as a child. Though this is just a single view on the character, what does everyone else think?

I have enjoyed reading Superman comics in eras where his parents were alive. I had no problem accepting his motivations in that period, so I would basically agree with you that their deaths are not really necessary to the character.

Their deaths are dramatic, though, and it is hard for a writer to resist the dramatic.

That is true, drama is very enticing, but its just more heartwarming to see Pa Kent cheer his son on and be the source of Clark’s endless hope for humanity.

I grew up with the Post-Crisis era of Superman where the Kent’s were alive. It was nice to see Clark stop by to see them from time to time.

No. I think they should be alive.

I think having them alive helped set Clark apart from other heroes with traumatic pasts. I mean, he already had his planet destroyed, is the last(ish) of his kind, and hides a big part of who he is through most origins. Adding adoptive parents’ deaths on top of all that just feels like dumping on or trying to one up other origins stories. They can die later in life, outside of an origin story, I guess, but I think having Ma and Pa Kent alive could provide more stories. They provide a different dynamic and environment than pretty much anyone else, and having that tool on hand can be useful instead of just riding more of the same angst train of dead family members.

That’s when Superman is the best, when he is Clark Kent first and Superman second. When authors and directors understand this, some of the best Superman stories come from it

Exactly, while having one of them die to a cause Clark can’t stop like an illness or heart attack is an interesting story you could tell, it just wouldn’t fit in a Superman origin story.

I’m a strong proponent of keeping Johnathan and Martha Kent around alive and well. As I stated in another thread Not all super heroes need a grim/dark origin to make them interesting. (The more heroes you give that origin to, the more you’re making them cookie cutter copies of each other!)
There’s also a practical side to it in that you can use the Kents as a sounding board for Clark to discus the problems he’s dealing with as Clark and/or Superman without having him talk to himself. (In that way, they serve much the same function for Superman that Alfred has for Batman.

@superby1: Couldn’t agree more about Clark being the “real person” and Superman is the “disguise”. And this approach to Clark always works best when Ma and Pa are alive into his Superman career. Some of my favorite scenes in Lois and Clark: The New Adventures of Superman are the ones where the Kents console, help and advise Clark when he struggles with his responsibilities as Superman. There’s an amazing scene after Lois learns the truth about Clark, and because of this revelation, Martha is finally able to talk to another woman about her “boy”. This guy can smack meteors away from crashing into Metropolis, but his mother still worries about his physical and emotional health. Moms will be moms, and Clark needs his as much as any other “boy”.

I’m not a fan of stories where the Kents die while Clark is a young man, but I do think having him lose his father later in life (in the post Crisis, pre Flashpoint continuity) was powerful. It was an obvious callback to the 1978 movie, but setting it after he’s already Superman made it even more heartbreaking.

or a tornado thingy

I’m assuming they’re back now because of something in Action Comics, because I remember Rebirth keeping them dead at the beginning.
I prefer his parents to be alive, as they’re a grounding element for Clark. It helps show how much of a Kansas boy he really is. They offer an uncomplicated, human perspective when their son has a problem that might seem out of their league.

The rare occasion where their deaths have proven to mean something other than “make more like Batman” is something like in the first-ever Superman movie. His Dad died from a biological condition, and none of his powers could have saved him. It showed him the limitations of his abilities at a time when they might have made him overconfident.
That said, I don’t think either John or Martha, let alone both, should die as part of Superman’s origins. I think it’s more inspirational, more iconic, if he does what he does because he was raised to do the right thing.

I agree with the general sentiment so far. I don’t think there’s anything inherently wrong with having a death of a parent moment (like '78 Superman, notably), but I don’t see it as a necessary or central part of Superman’s origin. Lois & Clark was a great example of using the Kents well, as a means of getting the audience into Clark’s head. Plus, “My mother made it for me,” was a great moment.

Not Rebirth but they were brought back at the end of Doomsday Clock as if they had never died. 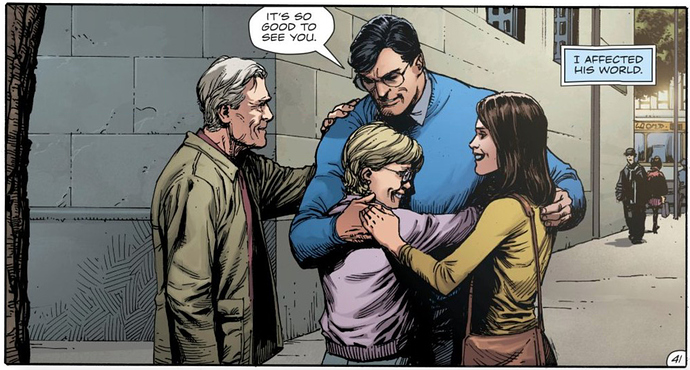 I was overjoyed when they returned in Doomsday Clock!

All due respect to the Kents, but they should die before he’s Superman. In the first Superman novel from 1942, Eben (Jonathan) Kent dies of a heart attack. The same scene plays out in the Adventures of Superman tv series. The Kents are nowhere to be seen in The Golden Age. They also die in The Silver/Bronze Age Continuity. They are around when he is Superboy, but then he gifts them pirate treasure for their anniversary. They contract a rare disease from it and die before he’s Superman. In the New 52 they die in a car accident.

There is only ONE era they survive for: Post-Crisis. In it, they make him a weak figure. He constantly needs to go back to them for advice like they’re a security blanket to convince him of how “human” he is (he’s not). He’s also constantly worried about their safety. The Kents exist to deliver cliched Midwestern platitudes and then fade into the background. … No thanks.

But, I’m the king of unpopular opinions on Superman.